On this outing we'll join two of our shorter trails to make a good long hike that will tak us through some very picturesque countryside scenery as we go over ridges, through fields and forests, and down long valleys as we make our way over the hills to arrive at a beautiful Buddhist site.

Flower Wood is a small roadside settlement, and we'll start the hike with a stroll through its narrow streets. At the back of the village, a bridge crosses a dried riverbed, and a trail leads through the fields, heading for the hills.

The trail was made by villagers to make it easier to transport produce from the orchards in the hills. To begin with, it was a narrow dirt path; since then it's gradually widened to allow the little blue three-wheeler trucks to get in. We'll follow the trail up a long valley, walking through all the chestnut orchards on the way to the hill trail that will take us over the ridge.

At the top of the hill is one of the main landmarks of the area: an old, old pine tree, alongside a recently-built shrine. We'll take a break here before continuing on to Lily Village.

The countryside around Lily Village is quite similar to that around Flower Wood, but the hills are much smaller. We'll follow narrow dirt trails through more orchards on the way down to the village road.

From Lily Village we follow a concrete road up through fields, passing by a few reservoirs on the way to a low pass on a ridge. Crossing the ridge, we head down a narrow gully to reach the farmland on the other side, eventually arriving at a dirt road that will take us out past a hot springs hotel.

From the hot springs hotel, it’s a short walk to the beginning of our Silver Pagodas hike. 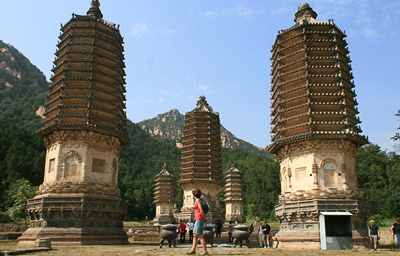 A view of the pagodas at Silver Mountain.

For this part of the hike we'll follow a loop around Holly Mountain and climb to one of its peaks, first passing through a village and then following a one of the old trails that joined villages in the area, passing an isolated shrine, fields, and concrete water reservoirs as we circle the mountain.

As we enter the "Valley of Mercy" the path starts to get a lot steeper, heading past more quarries and following a hillside trail up to the top of Holly Mountain. The valley is not too merciful to the legs. It's quite a good climb!

Towards the top we'll find the Silver Pagoda park trail, and climb its steps to the viewing platform at the top. We can look down on the pagodas from there, and will have an unobstructed 360° view of the surrounding mountain peaks and countryside.

From the top we'll follow the park trail down to the pagodas, passing "North Beijing's Number One Waterfall" and many other local landmarks. There are two big bells in the park and we will pass by one of them - it's quite common to hear them toll as we walk.

The site dates back to the Tang Dynasty (618–907 AD), with the pagodas built in the 1400s. The silver bells of the pagodas used to ring in the breeze, and are the source of the name of this peaceful spot. The temples are long gone, burned during war.

After we're done walking, it's a short drive to the warm countryside restaurant where we'll have a big hot meal before heading back to the city.