This trip is so far out of Beijing it almost qualifies as one of our special long-distance trips, and we've organised plenty of interesting activities to make the travel worthwhile: hiking, a tour around the tombs, a long boat ride, and more! The tickets for the tombs are expensive, but we think it's money well spent – like the Eastern Qing Tombs, and opposed to the Ming Tombs, the key buildings of the Western Qing Tombs are all quite close together and we've found some interesting ways to get about between them.

With 10 people signed up, this trip is all go!

The Western Qing Tombs necropolis is one of the two main burial sites for the emperors of the Qing Dynasty. Located in the foothills of Yongning Mountain, the area is rustic but beautiful.

For this overnight trip, we’ll be hiking both days, taking a tour by boat, spending the night in a local guesthouse and enjoying food cooked in the local style.

On the first day, we’ll be visiting the tombs of important historical figures like Emperor Yongzheng and Emperor Daoguang, as well as hiking up Wolong Mountain, which affords a view of the entire tomb complex.

On the second day we’ll take a long boat tour to enjoy the scenery of Yishui, visiting one of the filming locations for John Woo’s recent epic, “Red Cliff” before doing some hiking around the lake. 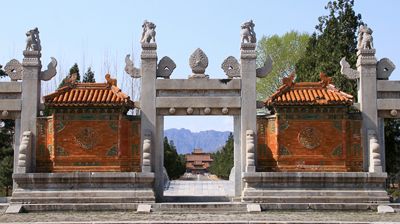 An ornamental gate at the Western Qing Tombs. Click to view a larger image »

The area was chosen for the site of the tombs by the Yongzheng Emperor in 1730AD for its auspicious feng shui, with the mountains to the north and the broad river to the south said to symbolise Yin and Yang. Before the Western Qing Tombs were built, the Qing Dynasty emperors were interred at the Eastern Qing Tombs, around 130km northeast of Beijing.

The Yongzheng Emperor was interred in Tailing, the largest of the tombs, and the first constructed. His son, the Qianlong Emperor, was buried in the Eastern Qing Tombs. From then, most of the time, the Emperors of the Qing Dynasty alternated between the two sites when constructing their own mausoleums.

Before the end of the Qing Dynasty in 1912, three other imperial tombs were built in the Western Qing Tombs: Changling, Muling, and Chongling. Of these, Changling and Chongling are open to entry by the public.

As well as the tombs of emperors, the Western Qing Tombs also contain many smaller structures: the tombs of queens, imperial concubines, princes and princesses; temples and other stone buildings and steles; and a Sacred Way flanked by larger-than-life stone sculptures of officials and animals. 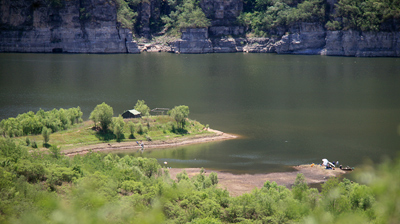 Yishui Lake, near the Western Qing Tombs. Click to view a larger image » 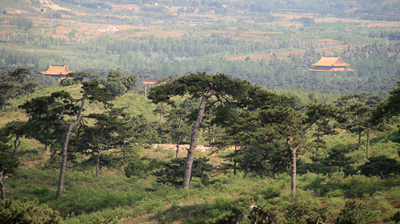 Old pine trees on a hill, with the Western Qing Tombs in the valley beyond. Click to view another photo »

When we were doing scouting for this trip we made friends with some locals who know some trails that offer great views of the tombs and lake from different angles, and take in some great scenery – we'll follow some of those on both days of the trip.

1 Muling: Because Daoguang, the 6th Emperor of the Qing Dynasty, ceded Hong Kong to the British, he only qualified for a small tomb. He was a fan of dragons though, and you’ll see a lot of those around his tomb.

We will stay in shared accommodation at a simple but clean guesthouse in Dragon Spring Village. Bedding will be provided, and there are taps and bowls to wash with. We’ll check in when we arrive, and leave our luggage in the rooms. On Sunday morning we will pack up and store our luggage on the bus before heading off on the hike. The bus will meet us at the end of the hike.

With 10 people signed up, this trip is all go!