We’ll start the walk with a short climb up to a dirt trail to reach the wall. Once we’re up, we’ll be able to see the roofs of a small town; past those, the old highway to Chengde; and even further, a stretch of Great Wall climbing a steep ridge.

Continuing along the wall, we’ll pass through a lot of towers – some in good condition, some tumbled down to foundations only. For most of this first part of the hike we’ll be on the wall, except for a short detour along a trail through a small pine forest.

We’re soon back on to the wall, and our first stop will be a big tower atop one of the larger hills in the area. We’ll take a break for some snacks and survey the surroundings. Behind us, we’ll be able to see the wall we followed to begin the hike, and in front of us, we can see the wall snaking through the hills up to a high point.

After our break we’ll continue, following the wall all the way up to the 24-Eyes Tower, where we’ll take another break. It used to be that there were six big windows on each side of the tower, adding up to twenty-four.

At this point we find the path along the wall bricked up because it borders a restricted area. This marks the start of our walk through Spider Valley!

When we first hiked this trail, the bushy path through Spider Valley was draped with cobwebs and we saw many a big fat spider sitting in the middle of their web. These days, there are fewer spiders. On the way through Spider Valley, we’ll walk by an abandoned house, wells, and water stores, as well as the occasional cobweb. The trail down into the valley starts off steep and slippery but it soon flattens out, making this a very nice stroll. 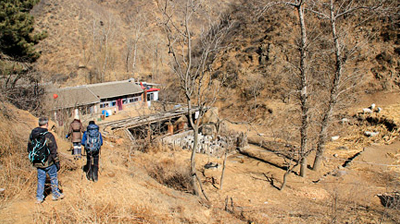 Once we’re out of Spider Valley we’ll start getting into the fields that surround Hemp Village. There are about 100 people living in this valley, surrounded by hills on all sides. They mostly grow corn in this area, but in the right season you can spot hemp and tobacco, and there are donkeys, cows, chickens, and dogs about the place as well.

We take a turn on to a dirt trail that leads up into the hills and on around to the back of the village, and that’s where our hike finishes, with a meal at our local guide’s house in Hemp Village.