This is one of several hikes we offer in the western hills, and it starts from the same village as our Walk Like A Pilgrim hike. We head off on a different trail, though, and finish in a small village on the other side of the hills.

One of our older trails, it was originally scouted out by Gary and Huilin. They saw the trail on the map, but when they arrived in the area they were told there was no such path. Uh-oh! After chatting to a few more of the locals, they found an older fellow who was able to point them in the right direction.

There have been a few changes in the area since Huilin and Gary were first there. Until around 2010, we were able to drive right up to the start point at Guandi Miao, an small, old temple with a gnurled and gnarly pine tree out front. But the road that lead up to the temple is usually closed of to non-locals now, and we have to start off at a slightly different spot, and we might not be able to pass by the temple.

We’ll see how it goes on the day!

The temple is surrounded by a small village, and out the back of the village we’ll find the trail that takes us up to the pagoda on the rock. 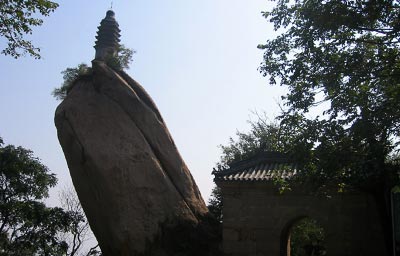 The pagoda on the rock.

The Jingangshi miniature pagoda sits on top of a rock and is part of the old Putuoyuan temple complex, one of the famous eight gardens of the Jurchen Jin Dynasty (1115-1234).

During the Jin Dynasty, one of the empress’s favorite chefs – a eunuch as well – had visited the temple and loved it so much he carved a stele in its honor, and the stele is still there now. After he died, his apprentice built the pagoda in memorial of him.

There was a legend that hinted at a hoard of silver hidden below the pagoda. Hearing this tale, a Guomindang (Kuomintang – National Party) warlord decided to find out if it was true or not, and took the pagoda down from the rock to look for the silver.

After no silver was found, he felt embarrassed. The little pagoda had been damaged in the search, and he sheepishly replaced it.

What is left of the temple is a cave with three arches. Inside the cave there is a chamber where a Buddha once sat. The arch on the left once housed a spring, and people used to come from miles around to take its waters. The path that leads to the temple up to the ridge also dates back to the Jurchen Jin Dynasty, so we’ll be following a track that’s almost one thousand years old.

After we’ve had a quick look at the pagoda we’ll head on up to the top of the hill, a fairly tough climb. On the way to the pagoda we’ll have done about two-fifths of it, but the last three-fifths are the tough part—a climb of 472m over about 2km. Phew!

We’ll take as much time as we need to get up top, and take a long lunch break once we’re up there. If you finish your lunch early, there’s time to explore a little.

The walk down the other side of the hill is tough in a different way: a zig-zagging descent that is quite steep and can get tough on the knees. Near the bottom the trail flattens out again, and we get on to a concrete road that takes us down to the village where we finish the hike.

It’s this part of the hike where we sometimes hear the woodpecker, but only sometimes!

Near the village we’ll find our bus, and after some snacks and drinks we’ll head back to the city.