There are quite a few steep stairs to climb to get to the temples at the top. 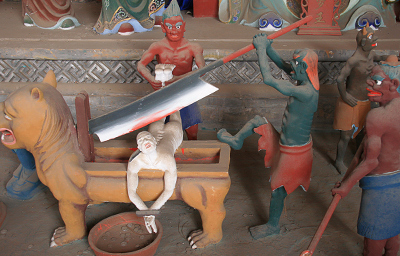 In one of the temples on the way up, there are two side halls with dioramas of Daoist hell, complete with horse-headed guards carrying axes and models that depict the several hundred ways that you will be tortured if you are not a good Daoist. As it’s Halloween today, we think that the models of Daoist hell are appropriately gruesome!

Yaji Mountain is named for its similarity to a hairstyle that was popular for young girls a long time ago. If you see the mountain from the right angle (and use a little imagination) you will be able to see the resemblance – think of the mountain as the head, and the two temples at the top of the mountain as the two cute pigtails sticking out from either side. Before we head down from the temples, we’ll take a little walk up a hill trail behind the temples to get a good look at this.