Celebrate Christmas with a hike!

We’ve been doing our Christmas Hikes since 2004, and in 2014 the tradition continues!

Regular hikers: this is the shorter version of this route. Extremely fit regular hikers: we’ll give you the option to extend the hike!

We’ll start the walk with a short climb up to a tower on the wall. There are a lot of towers on this stretch – some in good condition, some tumbled down to foundations only. From the first tower we can see the Wall stretching off into the mountains of Beijing’s Miyun District. We’ll be following it the other way towards Jinshanling, and will cross over the border into Hebei Province.

The wall in this area is built on ridges, and because there are not many trees on the ridgelines we will have broad views in every direction as we walk up to the tower in the area. That also means that there won’t be much shade, aside from when we pass through towers.

Our path along the wall takes us slowly up to the 24-Eyes Tower, the tallest in the area. It’s named as such because it was built with six windows on each sides. Two sides of the tower have since fallen down, and the rest is being held together by a metal scaffold.

From here it’s theoretically possible to follow the wall all the way to Jinshanling, but it’s practically impossible because the wall borders military land and is blocked off. This means taking a detour through Spider Valley!

When we first hiked this trail, the bushy path through Spider Valley was draped with cobwebs and we saw many a big fat spider sitting in the middle of their web. These days, there are fewer spiders, and it’s not as scary as it sounds. On the way through the valley, we’ll walk by an abandoned house, wells, and water stores, as well as the occasional cobweb.

Once we’re out of Spider Valley we’ll start getting into the fields that surround Hemp Village. There are about 100 people living in this valley, surrounded by hills on all sides. They mostly grow corn in this area, but in the right season you can spot hemp and tobacco, and there are donkeys, cows, chickens, and dogs around as well.

Before we arrive at the main part of Hemp Village we’ll make a sharp turn and head back up towards the wall, following a trail up the valley. It will take about forty minutes to get up there, and parts of it get a bit steep.

Just before the trail gets back near the wall, we’ll run into a newly constructed fence that blocks the regular path. We’ll have to make a diversion down into a valley, passing the house of a local farmer who – coincidentally? – charges a land-access fee and sells drinks. From his house we’ll climb up again, reaching our regular path beside the wall and heading on towards Jinshanling. Some of the climbing in this area is a little steep, with some scrambling required.

Before we get back on the wall, we’ll pass a spot that offers one of the best views of the Great Wall we’ve seen anywhere, with the whole of Jinshanling spread out across the hills in front.

From the photo spot we walk down towards a tower, and on the other side of the tower we’ll find an arch in the wall. We’ll walk through the arch to get back on the Beijing side of the wall, and climb up on to the wall through an old gate.

To get to Jinshanling, we follow a trail beside the wall until we’re past the military section. It’s this section of the hike where the trail becomes steep and a little tricky, but just for a while – soon enough we’ll be up at an excellent lookout point from where we’ll see all of the Jinshanling Great Wall, as well as the archway that will take us under and then back up on top of the wall.

And then, after we’re all done with the hike, we’ll continue by bus to the restaurant where we’ll have a big (although maybe not so traditional) Christmas feast of Chinese food, washed down with a good amount of beer.

After lunch, we’ll have a dumpling-making contest, with prizes awarded for ‘Most Dumplings’ and ‘Best Dumpling.’ If your dumplings are up to scratch, we may be be able to eat them as well! 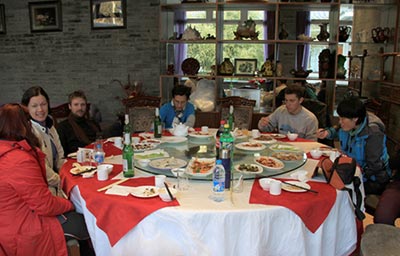 A big lunch for Christmas. 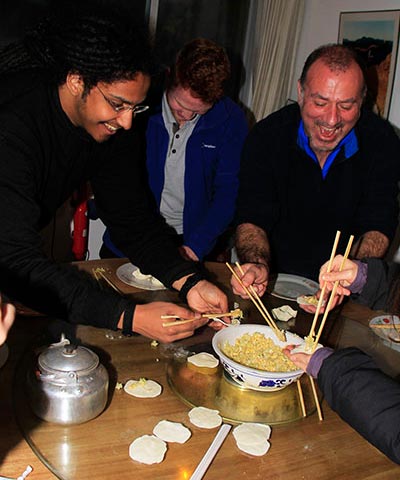 The dumpling-making competion is on!

Photos from other Christmas hikes