The Longquanyu stretch of Great Wall is about 20km north of the Ming Tombs, and was constructed during the Ming Dynasty (1368-1644 AD). This section of the wall belongs to Yanqing County, and is situated close to the borders of Changping and Huairou, part of the connection between the more famous Huanghuacheng and Badaling sections of Great Wall.

This hike begins with a walk down a dirt path that leads to a small village, passing fields and orchards in an area that used to have a few mines. At the back of the village is a narrow path that runs up through orchards to join the first section of Great Wall that we'll follow.

In this first section of Great Wall, it's just the climb to the second tower that is a little steep. After that, though, the ups and downs are a little more gradual. The wall follows the ridgeline, allowing views of mountains on one side, and the Longquanyu water canyon on the other. In places, it is overgrown and bushy, sometimes tumbled down.

The Great Wall is often built up and down incredibly steep hillsides; a highlight of this section is a special spot where the wall meets a cliff that forms a natural barrier, the steps of the wall leading up to a sheer cliff. It makes a good spot for a short break, but there's not much room for sitting. Quite obviously we cannot continue any further, so we'll backtrack a little and take a hillside detour, walking through chestnut orchards to get back on to our second section of wall for the day.

The second section of Great Wall continues much as the first, and a natural barrier will again force us off. This time, though, it's a valley that makes it difficult to continue, with the ruined wall making a steep descent into the valley. Instead of trying a dangerous descent over loose rocks and bricks dislodged by trees and weathering, we'll follow a thin dirt trail down the hill, into the valley, and then past the remnants of the wall as we head for the Little West Lake.

After getting on to the valley floor the walking is flat and easy, following park trails over a drawbridge and around the Little West Lake, actually a reservoir formed by a dam. The area has been developed as a park, but in winter it's not likely to be too busy. In summer it's popular, with boat rides and all sorts of activity.

Coming out of the park, it’s time for another big hill climb, a steep and scrambly ascent that takes you up on to a rough section of unrestored Great Wall.

After a short climb we’ll be beside the wall, and will take a break here to see how the Great Wall runs along a cliff over the reservoir.

The wall beside the cliff is not in such good shape, so after we have a look at the reservoir far below we’ll stick to the hill trail and follow it over a ridge and around a corner to get on the Great Wall, where it’s safer for walking.

Further along the wall we’ll reach the highest point on today’s hike, a tower on a corner in the wall.

On a clear day the views along this stretch will be excellent, with mountains all around, and a line of wall seen stretching off into the far distance.

We’ll be following the wall down to the Zhuangdaokou Pass, detouring around some tricky sections and then down a very steep set of stairs. The wall dips down into a valley, and we'll follow a paved path down the valley to finish the hike.

We'll first board the bus and take a short drive to the restaurant where we'll have our late lunch, and then we'll head on to the hot springs! 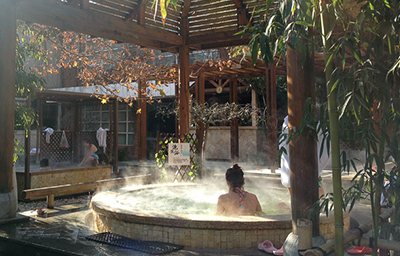 One of the outdoor pools at the hot springs resort. Click for 2 more photos

We used to visit a tiny little private hot springs hotel in the Changping countryside, but they’ve ‘shut down for renovations’, as the saying goes. We think hot springs are great after a winter hike, so we found another larger resort, closer to the city, and part of a five-star hotel – really nice!

We’ll spend about two hours at the hot springs resort, looking to head back to the city at or before 5pm.

At the resort there are more than 30 pools both inside and outside, and we’ll buy you a ticket that gets you access to the whole lot.

As well as the hot pools, there’s a swimming pool with lanes, steam rooms, sauna rooms, showers, and they say there’s even a pool filled with heated red wine.

The resort supplies towels, slippers, and lockers. You’ll need to bring your own swimsuit.

Food and drinks can be purchased inside the resort, but isn’t covered by the entry fee. Bring some small change in case you get hungry or thirsty.