This breathtaking region attracts visitors with its unique desert landscape, vibrant cultural diversity, and rich history. Alashan is located in the westernmost part of Inner Mongolia Autonomous Region, bordered in the north by Mongolia, in the south and west by Gansu province. This area encompasses several different deserts, including the Badanjilin, the Ulan Buh, and the Tengger. Hundreds of saltwater and freshwater lakes can be found in these deserts, including a few which we will be visiting.

Historical evidence of human presence in Alashan dates back as far as 6,000 years ago, when the Mandela Mountain Rock Paintings were carved. 28 ethnic groups including Han, Mongolian and Hui people inhabit this 270,000-square-kilometer (104,247 square miles) land. Reputed as the ‘hometown of the camel’, Alashan is abundant in two-humped camels and the down producing goat. The former were very important as pack animals along the Silk Road.

The name of the Tengger Desert comes from the Mongolian word for “sky.” The Tengger is classic sand desert: endless waves of sand dunes broken only by the occasional rocky crag. Located in the south-eastern part of Alashan, with an area of about 30,000 square kilometers, this desert is the fourth largest of its kind in China.

Many of the dunes found in the Tengger Desert are crescent-shaped, formed by winds that mostly blow in the same direction. Because of this, the Tengger is China's fastest moving desert, frequently threatening to bury railway lines as its dunes shift across the land. We’ll get deep into the desert, where it’s sand dunes in every direction, as far as the eye can see—quite a sensation!

Somewhat surprisingly, more than 500 fresh- and salt-water lakes and oases can be found in the Alashan Desert. On this trip we will visit or pass by Nuoritu Lake, Yellow Grass Lake, Mosquito Lake, and Temotu Lake.

The Temple in the Desert 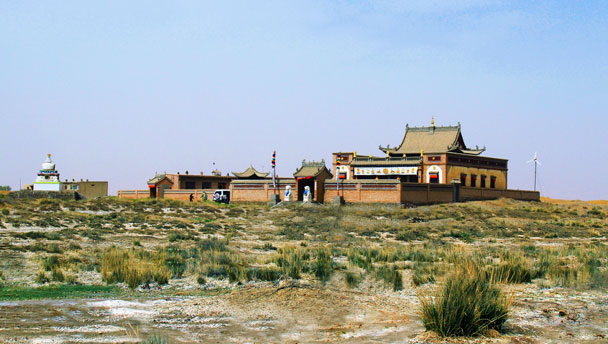 Built over several decades and finished in 1739, Chengqing Temple is a Tibetan Buddhist temple, and there’s a mysterious legend that connects its construction to the Sixth Dalai Lama.

By many accounts, the Sixth Dalai Lama, Tsangyang Gyatso, was not particularly suited to his position. The death of his predecessor was kept secret for 15 years; it took a three-year search to find the new incarnation, a two-year old son of nobility, and then the next twelve years had to be spent getting him to the point where it could be revealed that the Fifth had become the Sixth.

But it seemed like even twelve years’ training was not enough, and the young fellow turned out to be more interested in life outside the Potala Palace, going out drinking and consorting with young women, and writing what’s said to be excellent poetry based on his escapades and standard teenage angst.

Around the same time, the Kangxi Emperor of the Qing Dynasty was backing a Mongolian king who wanted to take over Tibet. To make that long story short, the Sixth Dalai Lama was sent to Beijing for an audience with the Kangxi Emperor, who was going to decide what to do with him.

And this is where the legend begins. One version of history has the Sixth Dalai Lama being killed in 1706, on the way to Beijing, and being replaced in Lhasa with a fake Sixth.

Another version of the story, though, has him escaping mid-route and ending up in the desert, where he got back on the Buddhist straight-and-narrow middle path. He oversaw construction of the Chengqing Temple and spread Buddhism throughout the area, eventually passing away at the temple in 1746.

On the third day of our trip, we'll end up hiking through the sand dunes to reach the temple.

The story of the Western Xia (1036–1227 AD) Dynasty is interesting—a fierce beginning, consolidation of an empire, then a gradual decay due to scheming and corruption, and then an extended finale featuring 20 years of attacks by the Mongolian army, during which it’s said Genghis Khan received a mortal wound. The site of the tombs features an excellent exhibit that uses life-size models and murals to tell the entire story.

In the end, they were completely extinguished by the Mongolian army of Genghis Khan and his sons, leaving only the pyramid-shaped tombs of the early kings.

The near-total destruction of their capital and records means that little is known about the Tangut nomads who founded the Western Xia Dynasty.

The capital of the Western Xia was sited very close to Yinchuan, and the tombs are around 40km west of the city, on the way to the desert. To date, nine king’s mausoleums and 250 smaller associated tombs have been discovered, and one of the main tombs has been opened to visits.

Yinchuan, and the Tengger Desert, are located at the eastern end of the Hexi Corridor, a narrow strip of land between the Gobi and the Qilian Mountains that was a main part of the Northern Silk Road.

Travellers along the Silk Road couldn’t really go through the desert (too dry), and the Qilian Mountains (and the Qinghai Plateau behind) were also not the best option for travel. But snowmelt from the mountains fed rivers that flowed down to the flatter land between the mountains and desert, supporting towns and oasis outposts, allowing travellers and traders to rest and resupply on their way through.

Fortifications through the Hexi Corridor protected the travellers and enabled trade along the Silk Road, and we’ll see the remains of some of those fortifications on a quick hike to see Ming Dynasty-era Great Wall in the mountains between Yinchuan and Bayanhot—a rough stretch that is now mostly just the rammed-earth insides of the original wall.

Getting to Yinchuan and back home again

You’ll meet your guides at the Yinchuan Hedong International Airport between 10-10:30am on the first day of the trip.

The itinerary will finish in Yinchuan on the last day of the trip, and we plan to drop you off at the Yinchuan Hedong International Airport around 5:00pm.

Please do not purchase your flights until we are able to confirm the departure of the trip.

Extra information about the trip

We will spend two nights in a comfortable Bayanhot hotel, and one night camping in the desert under the stars!

Tents, sleeping bags, sleeping bag liners, and ground mats will be supplied by Beijing Hikers, and we'll provide one tent per person.

At the hotel you’ll be sharing a room with another hiker.

If you'd like your own hotel room and tent for the trip, it can be arranged at an extra cost of ¥500 in total, if rooms are available—usually not a problem!

Land transportation will be via private bus and big and comfortable jeeps.

The jeep travel through the desert might be a rough ride if you are prone to motion sickness.

Your own transport to and from Yinchuan is not included in the trip price. (Read more about that here)

Main meals and drinks, plus water to drink during the hikes, are included in the price of the trip.

Simple breakfast and picnic lunches will be provided on two days in the desert, as will dinner at camp on day two.

Other meals will be at restaurants in the areas we visit, or at the hotel. Bring some snacks and some spending money to buy extras.

Your own transport to and from Yinchuan is not included in the trip price. (Read more about that here)

On the first day of the trip we'll meet up at the Yinchuan Hedong International Airport. You'll be sent all the details in the week before the trip.

Beijing-based participants can also arrange to meet up with the guides at the airport in Beijing.

For overnight trips and special activities we typically require payment in advance. We'll contact you to arrange that payment when we receive your booking.

Prices listed exclude tax. If you’d like a tax fapiao printed we’ll need to add the 3% VAT to the cost.