Guizhou is a landlocked, mountainous province in central south China, sharing borders with the provinces of Yunnan, Sichuan, Hunan, and Guangxi.

The capital of Guizhou is Guiyang, a city of around 4 million located roughly in the middle of the province.

Its population is close to 35 million people, with nearly 40% of the inhabitants part of ethnic groups other than Han Chinese. With all the different ethnic minorities, you'll hear a lot of different dialects while in Guizhou. Standard Chinese is most commonly used, but in the mountains it's the local dialects which are most common.

While rich in culture, Guizhou does not do so well economically. Of the 31 administrative divisions of China, Guizhou ranked last in terms of Gross Domestic Product (GDP) per capita in a 2013 survey. Key industries of Guizhou are timber, forestry, and also tobacco, of which it is China's third-largest producer.

Guizhou was made a province of the Ming in 1413, but not willingly. Over the years there were several rebellions led by the Miao and Yao. After the Ming, the Qing took over in Guizhou, and at one point during the Qing Dynasty Guizhou was actually controlled by the Taiping Rebels. The Long March passed through Guizhou in the 1930's, and it was in Guizhou that Mao Zedong was made leader of the Communist Party. Quite a tumultuous history, and that's only going as far back as the Ming Dynasty! 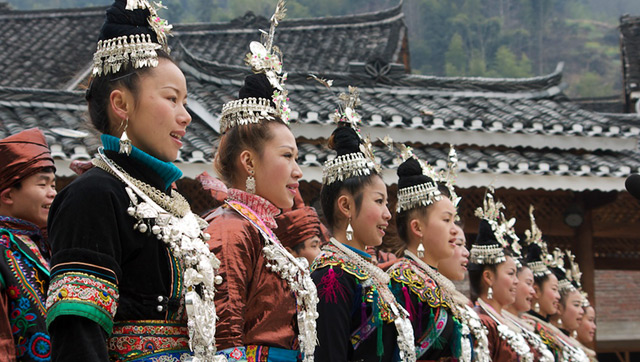 Dong women dressed up for a performance in the traditional clothing and jewellery.

We're flying into Guiyang for this trip, but will spend most of our time in the Qiandongnan Miao and Dong Autonomous Prefecture.

Autonomous areas have more control over local decision-making than areas controlled directly by the government, with more independence for decisions of finance, economic planning, and arts, science, language, and culture. The continuation of a tradition of hunting with rifles in Basha Village is an example of this.

The main two ethnic groups in this autonomous prefecture are the Miao and the Dong, together accounting for more than 70% of the total inhabitants. As with much of China, the urban areas are fairly modernised, but by heading out into the countryside we'll get a great look at the more traditional side of southern Chinese ethnic culture – very different to what we see in Beijing.

The Miao are the sixth-largest of the 56 different ethnic groups in China, with a total of around nine million people. Around 50% of that total live in Guizhou Province.

There are many sub-groups within the Miao, the most well-known being the Hmong. Some of these sub-groups are not closely linked, and some of the different dialects are not widely understood by those of a different sub-group.

In China, the sub-groups of the Miao are often referred to by the main colour of the women's clothing or some other key characteristic, resulting in names that are either very plain or very descriptive: Red Miao, Black Miao, White Miao; Big Flowery Miao, Small Flowery Miao.

On this trip we'll be seeing a lot of the Black Miao, as well as the 'Short Skirt' Miao of Basha.

A lot of the Chinese words to do with rice appear to have been borrowed from the Miao, who are perhaps the first rice farmers in China. It's not a coincidence that we'll be seeing a lot of rice paddies and terraces on this trip!

As well as special sorts of clothing, the Miao are also fond of festivals and performances, and we'll see several of those on this trip. Performances often depict rituals and traditions of the Miao, including animism (the worship of natural objects like trees and rocks), shamanism, and courtship and marriage rituals.

We'll get an up-close look at the unique customs of the Miao ethnic group at Basha Village, including the stilt-houses that are a signature style of their architecture.

The Dong are the eleventh-largest of China's ethnic groups, with a total of some three million people. As with the Miao, around 50% of that total live in Guizhou Province.

The Dong do not have as many sub-groups as the Miao, and the language has two main dialects: North, and South.

They are famous for a rich tradition of song, and their 'polyphonic choral singing' is listed by UNESCO as 'World-Class Intangible Cultural Heritage'. Common topics of the songs include love songs, drinking songs, bride's songs, and morning songs, and you'll definitely hear some of this special singing during the trip.

The Dong also hold to old traditions and superstitions, with elaborate rituals for courtship, weddings, and funerals. Some are animists and/or polytheists, and their folk religion includes divination from rice grains, bamboo shoots, and the entrails of chickens.

A typical Dong village has 200-300 homes, and in the village you'll usually find stilt-houses, covered "Wind and Rain" bridges, communal fishing pond, grain stores, and shrines for Sa Shui, the female deity who is the most important of the Dong gods. 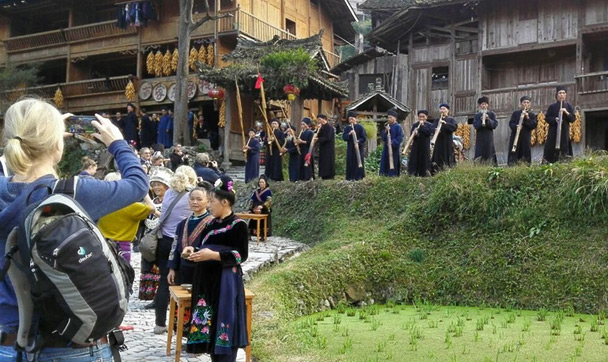 Arriving to a warm welcome at Langde Village.

On the first day of the trip we're going to do a two-hour hike through the countryside of Leishan County, finishing at Langde Village.

In Leishan County there are a lot of small villages scattered throughout the hills. We're going to follow dirt trails through the hills, passing fields and rice paddies on the way to Langde Village. The hiking isn't too tough, crossing over slightly hilly terrain, but it will be fairly slippery if it rains.

Arriving at Langde Village, a hamlet with a population of around 500, you'll be met with the 'blocking the way' ritual of the 'Long Dress' Miao. If you can figure out how to get by them, you'll be rewarded with a special song and dance performance, as well as a delicious country-style dinner! 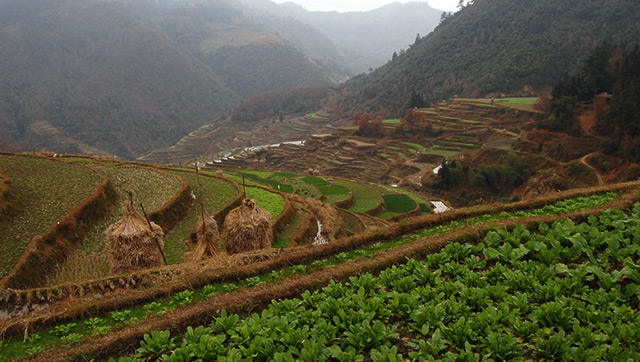 The terraces and fields below Basha Village. We'll hike down through the terraces to another small village.

Basha Village and the 'Black' Miao

On the second day of the trip, after we take a look around the Dong village of Huanggang, we'll head over to Congjiang County, an area populated almost exclusively by the Miao, Dong, Yao, and Zhuang groups.

In Congjiang County we're going to explore Basha Village, which contains five communities of the Miao, with an estimated population of 2,000. The village is sited amongst forest and bamboo groves, and the hills below the village are terraced for agriculture.

They'll put on a performance for us here in the village, and we'll be able to use what we see in the performance to identify which of the sub-groups of the Miao we're seeing here. As we explore the village after the performance, we'll note the style and colour of the clothing, the special top-knot hairstyle of the men, and some of the features of the local architecture.

In an autonomous area, historical and cultural traditions are afforded extra protection. Basha is one of the few places in China where regular folk can have rifles – licensed of course, and not commonly seen – as hunting is an important part of the historical traditions of the local people. 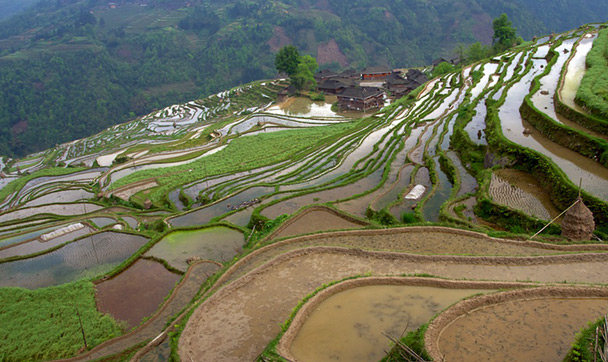 A small segment of the rice terraces on the steep hills of Jiabang, seen on one of the rare days where it's not all misty and rainy.

In a mountainous area rain runs off the mountain quickly, meaning topsoil is washed away and water doesn't really soak in - not so good for farming. So terraces are constructed, flat steps in the hill that catch the rain, and that can be also flooded by irrigation. One of the main crops in this area is rice, and near Jiabang Village we'll find the beautiful Jiabang Rice Terraces covering one side of a big valley.

We're going to hike through the rice terraces to get a close look at how rice is planted and grown. At this time of year the terraces will be flooded with water, making the mountainside into a maze of mirror-like pools. Be careful to not fall in!

We'll be visiting the Jiabang Rice Terraces on the third day of the trip, and on the way to the terraces we'll stop for a look about the Zhuang village of Yinping. Have you ever looked closely at a Chinese banknote and wondered about those other languages on it? One of those is the Zhuang language. 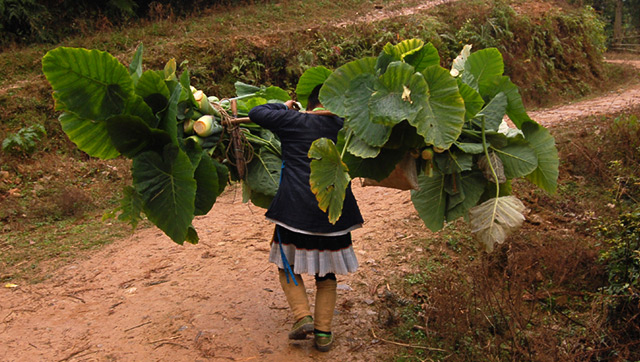 A common sight on the trails around the villages – super-heavy loads being carried on poles.

It's not a Beijing Hikers trip without at least a little bit of hiking. On the fourth day of the trip, we're going to do a big walk through the countryside, starting at the Dong village of Jitang and hiking through the hills and fields to get to Tang'an Village, another settlement where we'll see mainly people of the Dong ethnic group.

The hike is some 12-15km, and it will take us 4-5 hours. We'll include a packed lunch to eat on the way, and we will offer an shorter version if you'd like to take it a little easier.

As with the hikes we do in Beijing, a long walk between villages in the countryside is an excellent way to get a close look at the real lifestyle of the people of China.

After the hike we'll drive back to the Miao settlement of Zhaoxing, with plenty of free time to take in a song-and-dance performance and to explore the village before dinner.

Guizhou has more overcast days and rainfall than any other part of the country.

There's a relatively large temperature difference between day and night, caused by all the hills and mountains.

In April, the average temperature during the day is usually around 21°C, and around 13°C during the night. 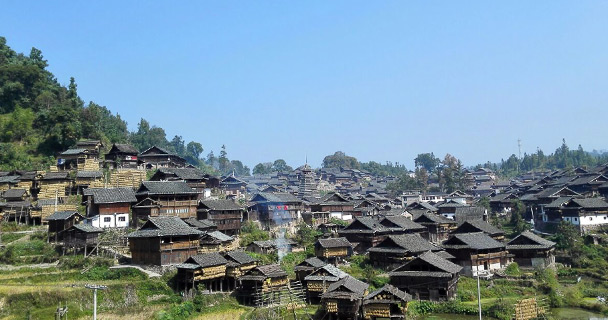 The town of Zhaoxing, where we'll spend two nights.

We will be staying in 4-star and 3-star hotels for this trip, the best places we've been able to find.

You’ll be sharing a room with another hiker. If you'd like a room to yourself, it can be arranged at an extra cost of 480 RMB for the whole four nights, if a room is available—usually not a problem!

We fly to and from Guiyang for this trip. Transportation between the various scenic locations will be by private bus.

We will take most of our meals at restaurants in the areas we visit, and/or at the hotels or guesthouses. On one of the days we include a packed lunch for a hike. Bring some spending money for snacks during the trip. Please let us know if you have any special dietary requirements or food allergies.

Rice is one of the main staples in this area, and some say that Guizhou is one of the places where rice was first farmed in China. We'll be eating a lot of rice on this trip!

Photos and trip reports: Guizhou: Miao and Dong culture in the mountains (5 days)