Day 1—Fly to Xining, visit Kumbum Monastery and Laji Mountain.
Day 2—Hiking by Qinghai Lake.
Day 3—Hike up to the glacier on Gangshika Snow Mountain.
Day 4—Walkabout in Xining including the museum, fly back to Beijing.

Qinghai Province is located in China’s northwest, and shares borders with Xinjiang, Gansu, Sichuan, and Tibet. A large part of Qinghai is on the Tibetan Plateau – a vast high-altitude plateau bordered by the Himalaya, Kunlun, and Qilian Mountain Ranges.

The Qinghai region was known as Amdo during the time of the Tibetan Empire. From the thirteenth to the sixteenth century, the region was under the control of the Mongols and known as Kokonur. And after the Qing Dynasty was overthrown, much of the region was under control of a family of Hui Muslim warlords known as the Ma Clique. Today in Qinghai you can find traces of that history: Tibetan Buddhist monasteries, Muslim mosques, plus a big mixture of local languages and dialects.

The province is named for one of its most prominent features, Qinghai Lake, the largest lake in China. In Chinese, ‘Qinghai’ translates roughly as ‘green sea’. The older Mongolian name of the region, Kokonur, has a very similar translation: ‘blue lake’.

The main highlights of the trip are Qinghai Lake, trekking on the Gangshika Snow Mountain, and a tour of the Kumbum Monastery. 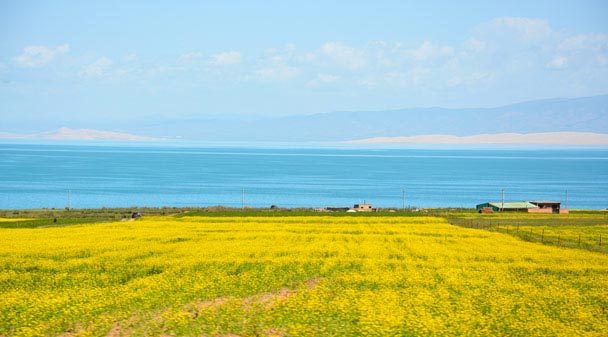 The largest lake in China, Qinghai Lake is located in a depression in the Tibetan Plateau and fed by rainwater and the streams and rivers that run down from the nearby Kunlun and Qilian mountain ranges.

The lake is a key point on bird migration routes, and several bird sanctuaries have been set up on the western side of the lake.

The western side of the lake is very scenic: bird islands close to the shore, and a backdrop of grasslands and snow mountains beyond the vast expanse of beautiful blue water.

We’ll drive to Qinghai Lake from Xining, spending the day walking about and taking in the scenery by the lakeside. 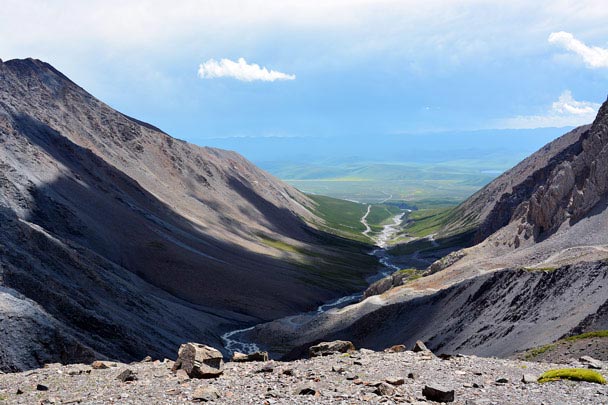 Looking down from Gangshika Mountain.

On the other side of Qinghai Lake we’ll spot the snowy peaks of the Qilian Mountain Range. Gangshika Snow Mountain is the tallest in this part of the range, with a summit of 5,245m.

On the lower levels of the mountain (3,700m) there is a small glacier known poetically as the ‘Seven-Coloured Rainbow’.

Further up is a larger glacier (4,300m), which can be reached by a hike through grassy meadows.

The trails are relatively easy, although the altitude will make it feel tough. If it’s clear, the views of the Qilian Mountains are spectacular.

Over the first two days of this trip we’ll be walking around at reasonably high altitudes near Qinghai Lake (approx. 3,200m) and Kumbum Monastery (approx. 2,200m). This will help us acclimatise a little for our trek up into the mountains.

We’ll start our hike from the lower glacier and walk up to the 4,100m base camp of the mountain. and from there we'll head up to the foot of the main glacier, which is at approximately 4,300m. 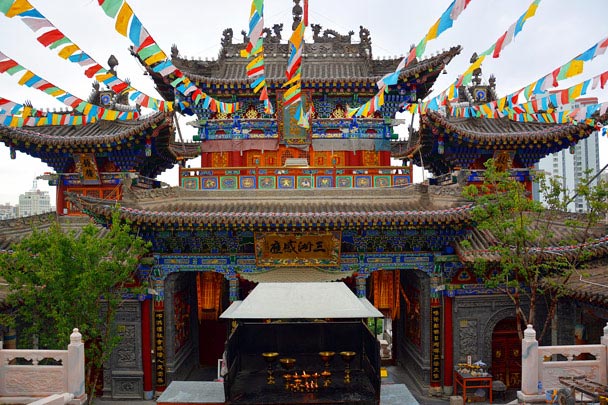 A hall at Kumbum Monastery.

Kumbum Monastery is a monastery of the Gelug ‘Yellow Hat’ sect of Tibetan Buddhism that was established in the 1580s at the site of the birthplace of Je Tsongkhapa, the founder of the Gelug sect.

Before the 1580s, there had been a small temple with a stupa to mark the site of his birth. Tradition has it that a sandalwood tree had also grown up, and that the leaves and the bark of that tree had markings that looked like Buddha’s face. The temple that was built around the tree is the holiest place in the temple. The tree is no longer standing, but the temple is still there and houses parts of the tree.

Kumbum has important (and interesting!) connections to the three main monasteries of Lhasa, and it’s in this area that the third – and also the first – Dalai Lama was given that title.

Je Tsongkhapa, born on the site of Kumbum, founded Lhasa’s Ganden Monastery in 1409, and it became the main seat of the Gelug tradition. Two of Tsongkapa’s disciples founded the other two main Gelug monasteries – Drepung Monastery, and Sera Monastery – both in Lhasa.

In the 1500s, Sonam Gyatso – who would become the third (but actually first) Dalai Lama – became the head abbot of both Drepung and Sera Monasteries. This made him a very important spiritual and political figure in Tibet.

What to do? A political and spiritual solution was found. Sonam Gyansto was invited to meet Altan Khan near Qinghai Lake. After that meeting Altan Khan became eligible to rule all the Mongolian tribes, and Buddhism became the main religion of his subjects.

How? Again, as the story goes, Sonam Gyatso announced that he had recognised Altan Khan as a reincarnation of Kublai Khan, and that he himself was a reincarnation of the Tibetan monk who had converted Kublai Khan to Buddhism. Altan Khan then gave Sonam Gyatso the title ‘Dalai Lama’, and announced that the two had come again to promote Buddhism to Mongolians. Very convenient!

So why was Sonam Gyatso actually the third Dalai Lama, even though he was the first to have that title? The title was later conferred on his two previous incarnations. And, in another convenient coincidence, Altan Khan’s great-grandson was identified as Sonam Gyatso’s reincarnation and became the fourth Dalai Lama.

Now that was a productive meeting. It’s not finished yet, though – it was on the way to his meeting with Altan Khan that Sonam Gyatso toured the small temple at Kumbum and ordered it expanded into a monastery fitting of the birthplace of the founder of the Gelug sect.

We’ll do a walking tour of the Kumbum Monastery on the first day of this trip. 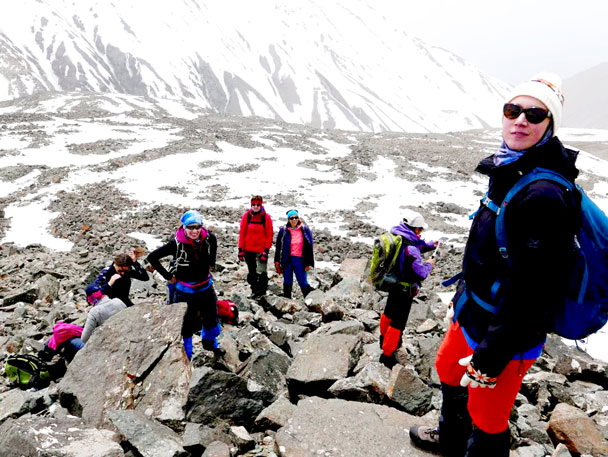 Near the glacier at Gangshika Snow Mountain.

During the trekking part of this trip we will be at high altitude, and will arrive without a whole lot of acclimatisation.

We take the issue of altitude sickness seriously. If anyone has serious problems with the altitude, one of the BJH guides will take them back to Xining straight away. If anyone has problems after that, they’ll be transferred back and met by the guide. Any extra costs incurred for transport/medical assistance are to be paid by participants. We will purchase insurance on your behalf, but you must be prepared to cover any up-front costs.

At high altitude, the weather may change suddenly for the worse. We reserve the right to alter the itinerary to ensure the safety of all participants.

In Xining, we will be staying in a modern hotel.

You’ll be sharing a room at the hotel with another hiker. If you'd like a hotel room to yourself, it can be arranged at an extra cost of 600 RMB for the trip, if a room is available—usually not a problem!

We’ll be flying to and from Xining. Travel during the trip will be in a comfortable private vehicle.