Xiangshan ‘Fragrant Hills’ Park is one of the most popular parks in Beijing, particularly in autumn, when the leaves of its maple and smoke trees turn bright red.

Beijing Hikers founder Sun Huilin and local expert Mr Yang Zheng, a historian of traditional Beijing culture, will take you on a walking tour that concentrates on Jingyi Garden (the ‘Imperial Mountainous Garden’), built during the reigns of six of the Qing dynasty emperors, and includes an hour-long talk from Mr Yang.

It's called the Imperial Mountainous Garden because it was a favourite retreat of emperors, particularly the Qianlong Emperor of the Qing Dynasty. You'll see highlights that include:

The Qing Emperor Qianlong used Qingzheng Hall as his residence during his 82 trips to Xiangshan. We’ll show you signs in the architecture that identify the hall and study as a residence for royal use.

Built on the orders of Qianlong for a 1780 visit to Beijing by the Sixth Panchen Lama, Zhao Temple is modelled on Tashilunpo Monastery, the Panchen Lama’s seat in Shigatse, Tibet. Originally there were six glazed pagodas. You’ll hear the story of why there is now only one pagoda, as we go through the history of the temple.

Highlights of the Temple of Azure Clouds include different styles of decorated doorways, and a rarely-seen-in-Beijing Indian Buddhism-style pagoda. The temple was also where Dr Sun Yat-Sen, the first president of the Republic of China, lay in state until transfer to his final resting place in Nanjing.

Also in the temple is Five-Hundred Arhat Hall, and it’s said that all visitors will be able to spot their arhat doppleganger among the five hundred statues. See if you can find yours!

Designed by the late I.M. Pei, the hotel was built in 1982, and was his first commission in China. The design mixes Western architectural technology with imperial flourishes.

The hotel is built on the site of Xulang Yard, which was destroyed by Anglo-French troops in 1860.

You’ll hear the story of the hotel, and we’ll have lunch at the hotel restaurant.

Your hosts for the tour are local historian Yang Zheng, and Beijing Hikers founder Sun Huilin. 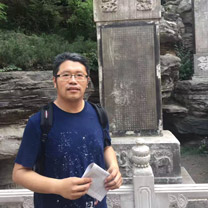 Mr Yang teaches English at Beijing No. 5 High School. His personal passion is the study of traditional Beijing culture and history. Mr Yang has been nominated as a “Beijing Role Model 2020”, and his work has been published in the Beijing Evening News and other online and offline media. He gives talks about Beijing’s culture and history on both television and radio as well as in-person lectures and classes, and brings his knowledge and stories to this Beijing Hikers special event.

This walking tour will be conducted in Chinese and English, with Beijing Hikers founder Sun Huilin hosting and translating where necessary. Mr Yang and Huilin will give a one-hour (approx.) talk covering culture and history at the Xiangshan Hotel.

If you're a Beijing Hikers member, we offer a further discount for your children.

Extra information about the tour

For the hikes in Beijing our regular pick up locations are the Liangmaqiao Subway area and the Starbucks at the Lido Metropark Hotel. Occasionally we offer pick ups at other locations. Follow the link for details.

See details, maps, and photos of the pick up locations

For the day hikes in Beijing we collect your payment on the day.

You can pay with

For overnight trips and special activities we typically require payment in advance. We'll contact you to arrange that payment when we receive your booking.