This hike was a combination of two of our Level 3+ hikes: the Big Black Mountain to the Walled Village hike, and then the Moss Mountain walk.

It’s a long hike, but there isn’t a whole lot of climbing. That makes it a good choice if you’re interested in a long ramble in the hills of Huairou.

We started off by the roadside in a village opposite Big Black Mountain, hiking into the hills on field trails that took us through chestnut orchards. The hills on this side of the mountain are full of chestnuts, which are one of the main crops in the area.

The chestnut orchards extend up valleys until the hills become too steep for the trees. At the end of one of the valleys we hiked an old path over the hills, crossing over the ridge and then heading down another long valley.

We then hiked over to the Walled Village, passing the Zhuangdaokou Great Wall on the way.

From the Walled Village we started on the Moss Mountain part of the hike, following concrete paths through more chestnut orchards before getting on to a long hill trail that took us over the biggest hill of the day.

We finished the hike by walking out through a park area. 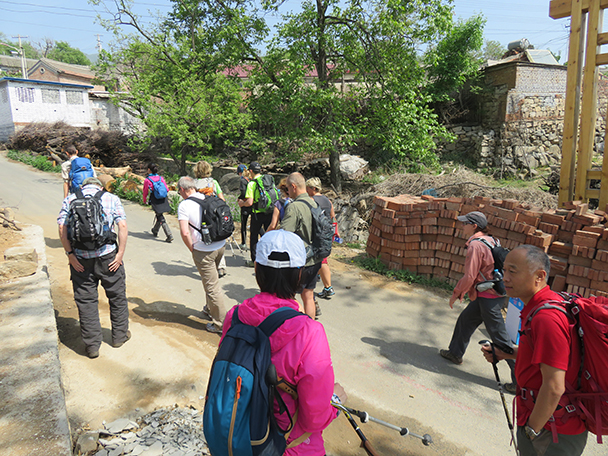 We started the hike at a village in the hills opposite Big Black Mountain. 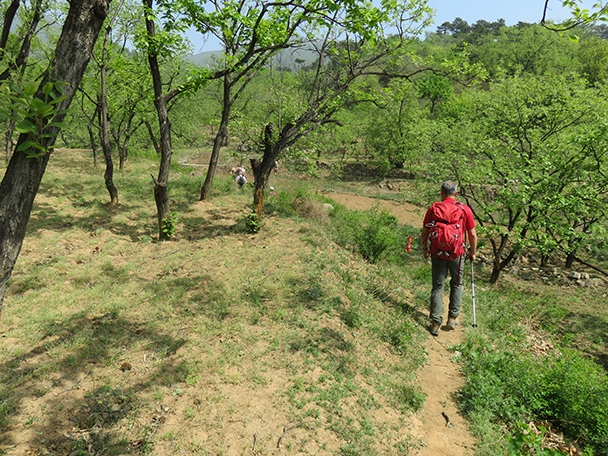 The first part of the walk was a fairly easy stroll along farm trails, passing through chestnut and walnut orchards. 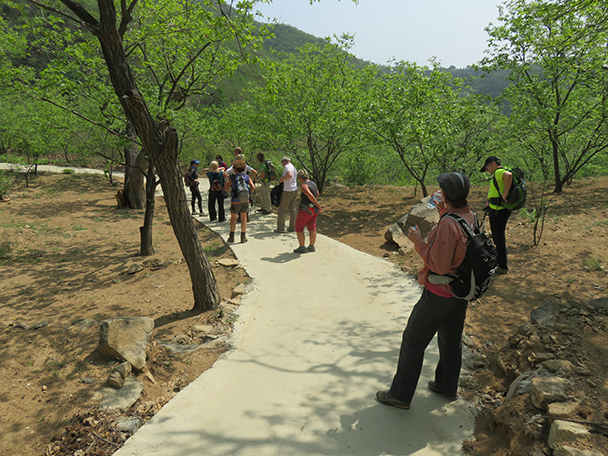 Taking a little break before the first hill climb of the day. 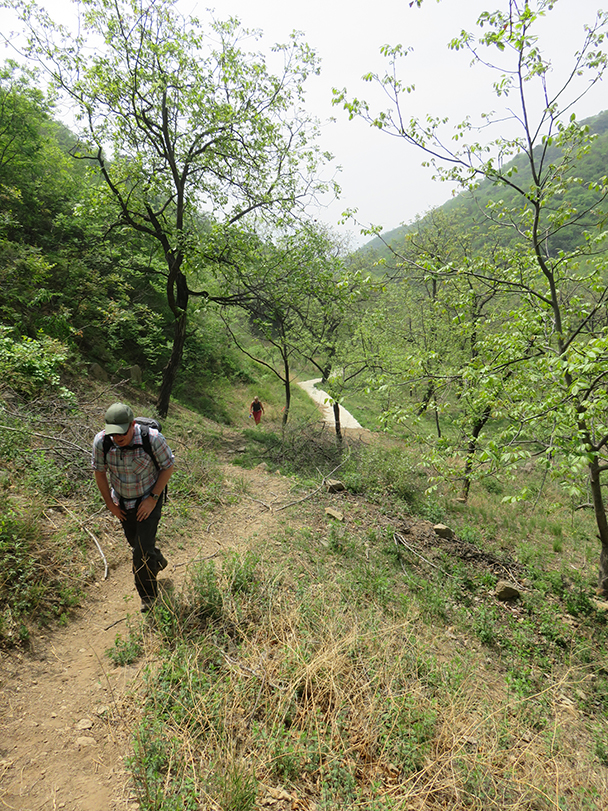 Off the concrete path and up into the hills. 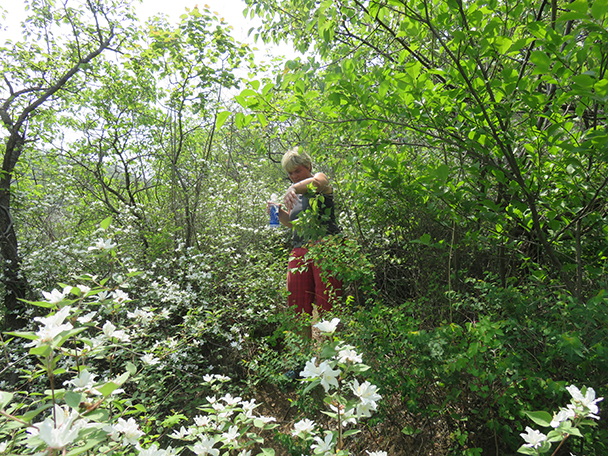 The trail got fairly brushy as we climbed over the ridge. 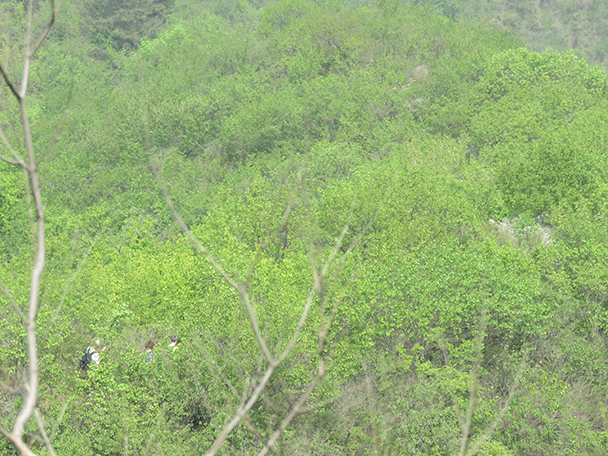 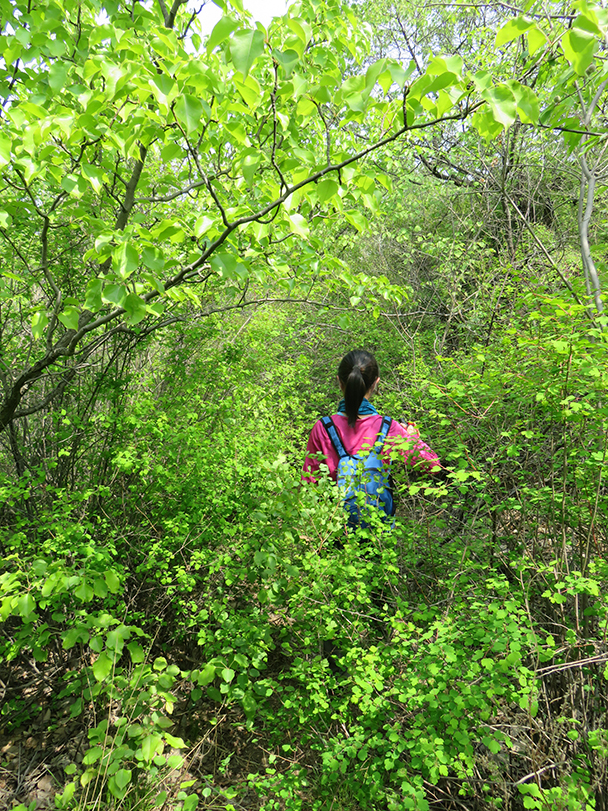 Approaching the top of the hill. 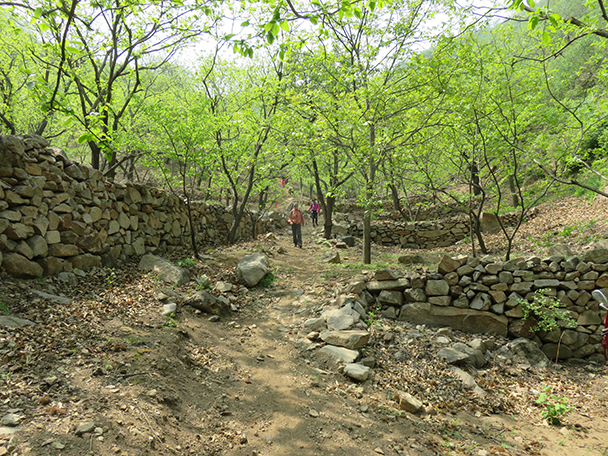 We hiked down the other side of the hill, crossing terraces. 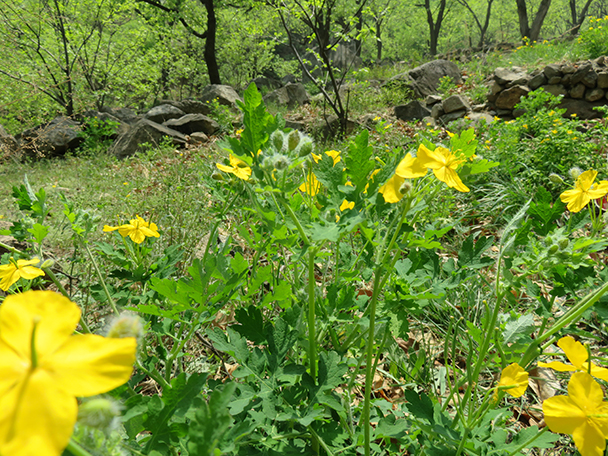 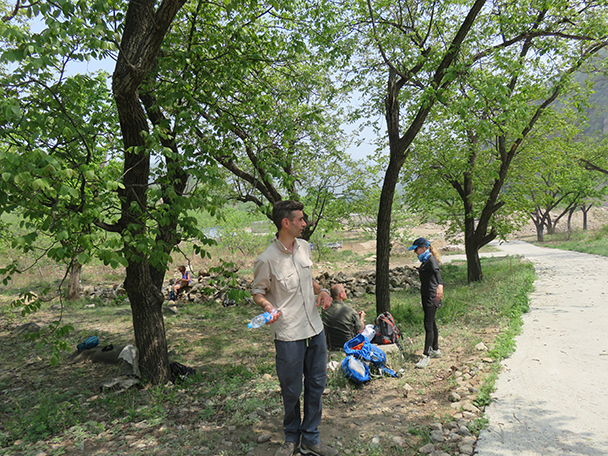 Taking another rest after coming down the hill. 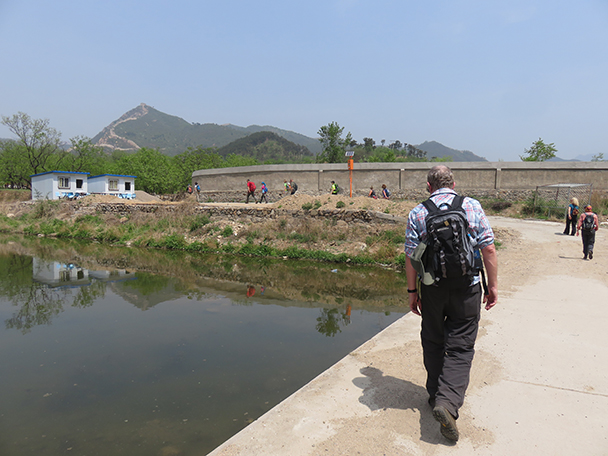 We hiked on, heading for Zhuangdaokou, and taking a wrong turn at this bridge. We were supposed to turn right! 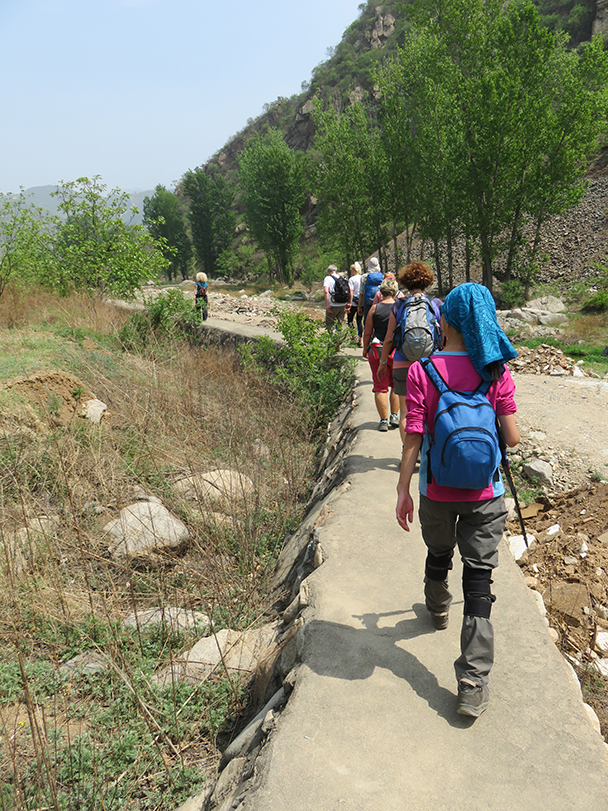 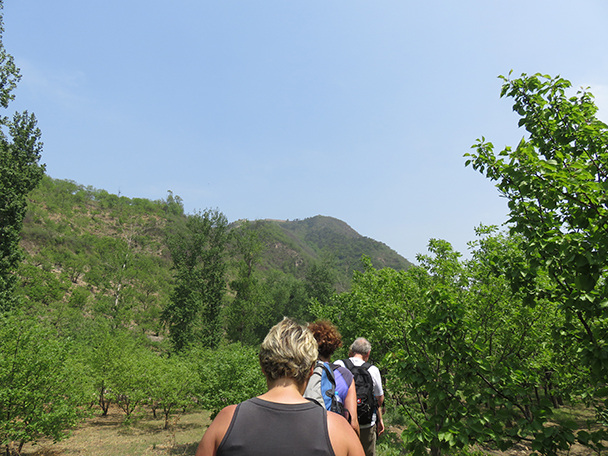 Around the corner we’d cross the mountains at a pass in the hills. 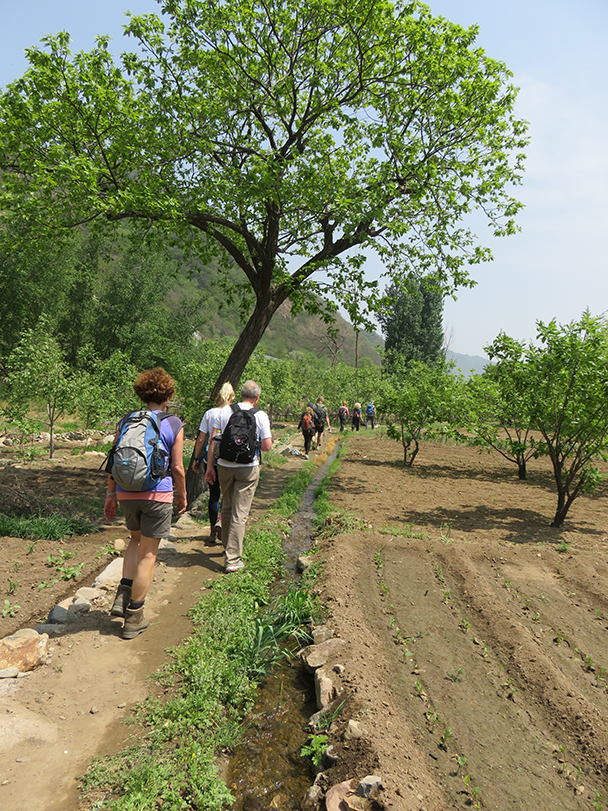 An irrigation channel by fields. Villagers here plant lettuce and spring onions, and there are some persimmon trees. 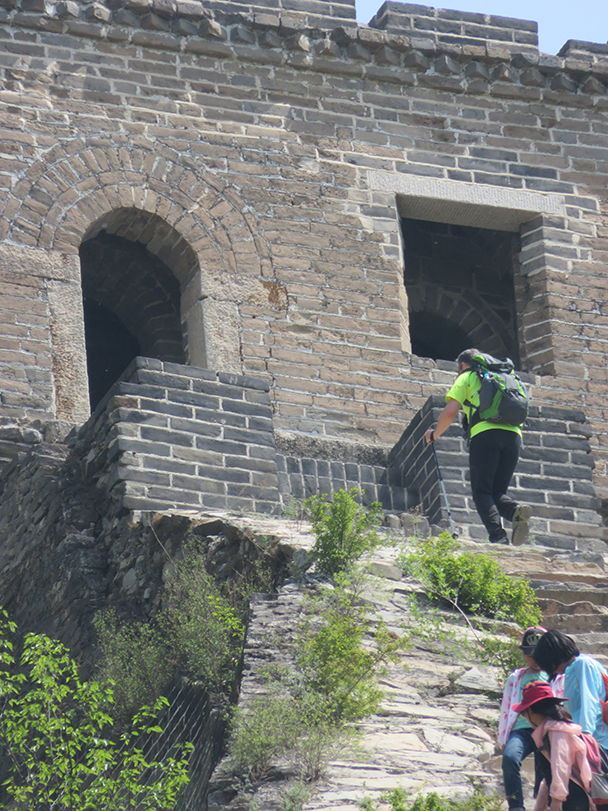 We crossed at the Zhuangdaokou Great Wall, and super hiker Tristram climbed up for more exercise. 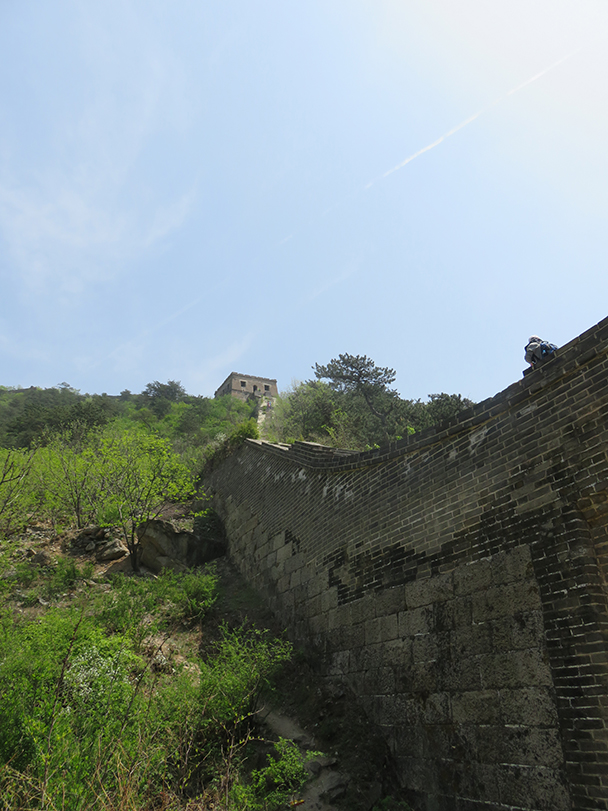 A view of the wall at Zhuangdaokou. 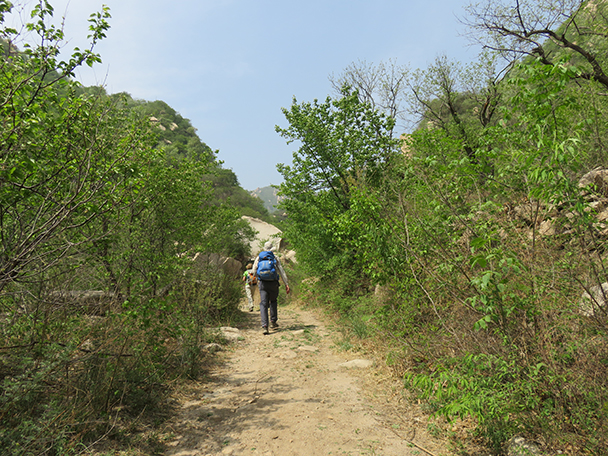 We hiked on after a lunch break. 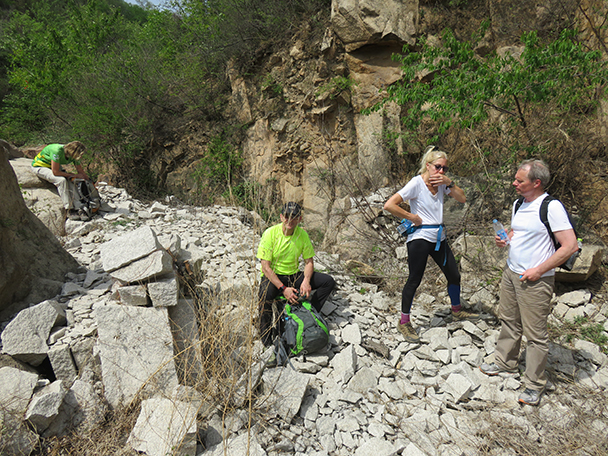 The trail to Moss Mountain took us through a rock quarry. 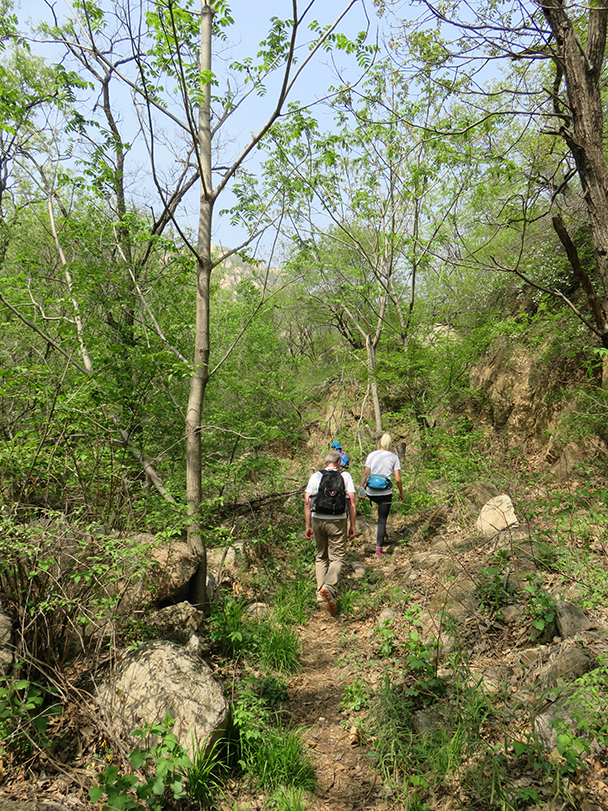 We walked on through forested areas. 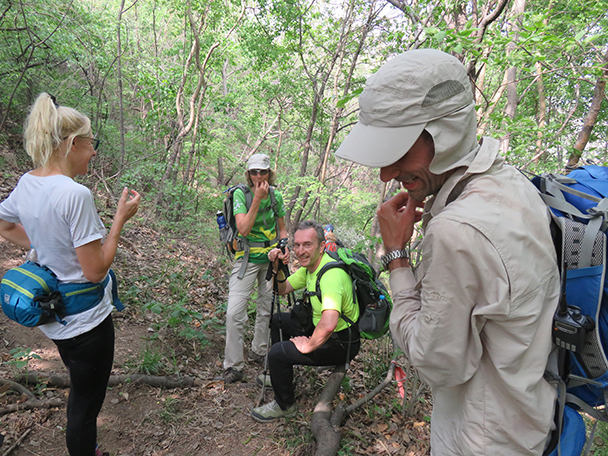 Just made it to the top of the last hill. 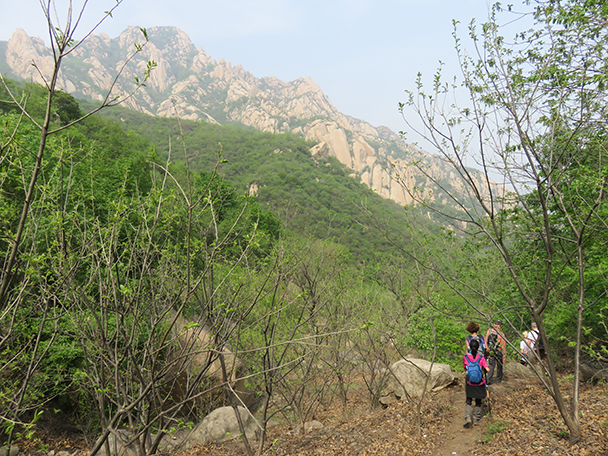 We hiked down below the big cliffs of Moss Mountain. It’s called Moss Mountain because it used to be covered with moss. 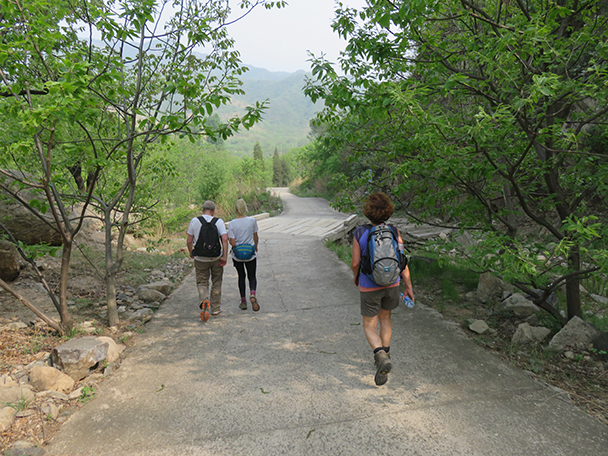 The hike finished at the end of the concrete road.