The old city of Pingyao in Shanxi Province boasts intact city walls and several examples of surviving architecture from the Ming and Qing Dynasties (1368-1911). Residences, shops, and even the government offices are preserved in the architectural styles of those periods.

Pingyao was designated a UNESCO World Cultural Heritage Site in 1997 for its historic and cultural value. It’s easy to imagine what life was like in previous centuries while walking through the narrow lanes past well preserved ancient buildings in this former imperial trading center. We were able to appreciate this unique part of China as we explored the city and its cultural offerings. Later, we also had the chance to take a relaxed stroll in the countryside outside of the city in order to admire the local landscape.

The ancient architectural style of Pingyao’s streets has been preserved since the Ming dynasty. Here’s a view looking toward one of the city’s main gates.

Hikers taking a look around one of the traditionally styled courtyards.

A display of some of the weaponry that was used during the Ming and Qing dynasties; the character behind them says “weapons” or “arms”.

Locals use old fashioned means of transport on one of Pingyao’s many tidy, narrow lanes.

A variety of local snacks to sample; the sign in front says “Ping Yao farmers snacks”.

Bicycles are still a popular form of transportation there for old and young alike.

A local entertainer and his donkey. Donkeys are still widely used throughout the Chinese countryside and many restaurants serve roast donkey meat.

A group photo in front of the museum.

An elderly local woman relaxes on a step in the street.

Ping Yao’s city walls are very well preserved. This gives visitors a good idea of what the city may have looked like 500 years ago.

In Pingyao, efforts are made to preserve the centuries old pavement as well as the architecture.

This well preserved tower was an important structure in its day.

A leisurely stroll atop the city walls provides great views of the city below.

A local street scene as viewed from high up on the city walls.

The locals enjoy passing the time by playing traditional games.

Now the group tries its hand at paper cutting – definitely not as easy as it looks!

Some members of the group enjoy a break in a café. 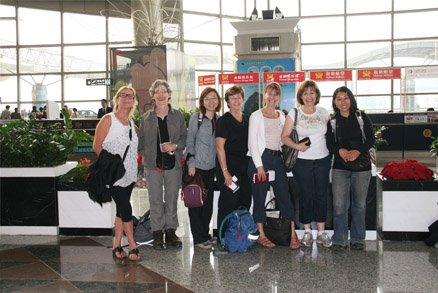 At the airport after an enjoyable and culturally enriching trip.