Near the beginning of April 2011 we took a trip to Shanxi Province to visit the ancient walled city of Pingyao. We called it a 2.5-day trip, heading down on the fast train at noon on the first day, and flying back on the evening of the last day. Below you'll see some photos of the city and what we got up to on our visit!

Some of us took a photo with the train.

We took a little ride around the city on an electric car.

There are many interesting walled courtyards to look at inside the city walls.

A view of the rooftops of Pingyao.

One of the gates inside the city.

A nice setting in a not-so-nice location: the old city jail!

A view of one of the main streets.

A pavilion by the water

Visiting one of the many temples.

A stage in one of the larger compounds, used for traditional opera performances.

Enjoying the view from the city walls.

We took a photo with the people who made a performance of traditional opera for us. 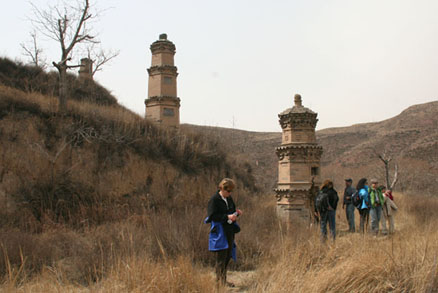 On the last day of the hike we did a nice hike in the hills around the White Cloud Temple.