Once again, we found ourselves intrepidly pushing on through blizzard conditions for this Great Wall hike. Because of heavy snow, we had to alter our plans and use a simple out-and-back route rather than our usual loop. Starting from the restaurant where we’d eventually have our lunch later in the day, we set off through a village.

After the village, we next passed through an abandoned resort nestled into a valley. Our trailhead lay at the edge of the resort, and led up the side of a spine onto a ridge. Because of the slippery conditions, we walked on paths that ran parallel to the Wall rather than on the Wall itself.

The going was slow at times, especially where the snow covered bare rock faces, but we finally reached the highest point of our hike, the Round Tower. On the one hand, the thick precipitation deprived of us of the sweeping panorama we normally enjoy from that peak. However, looking out over the cliff through the dense flakes was breathtaking: the opposing crags loomed imposingly through the clouds and snow, and the softly falling whiteness lent an added sense of height as we peered down at the canyon far below.

The day’s Great Wall trekking was ultimately enhanced by the winter conditions, and we were all the happier to descend back the way we came and enjoy a warm, decent meal at the conclusion of the day’s walk. 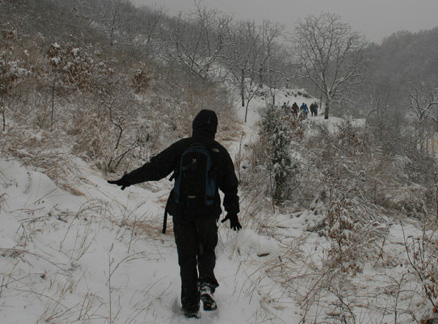 Heading up along a snowy trail. 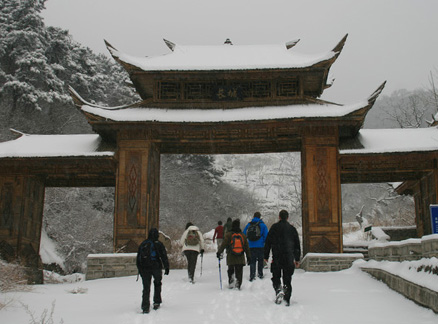 A big gate made from bamboo. 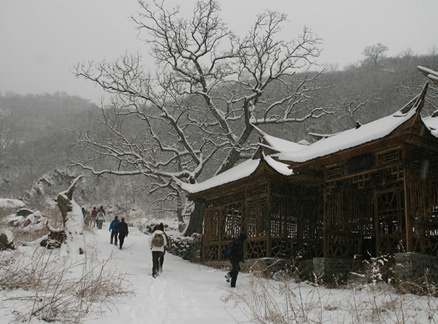 Passing part of the 'Bamboo Hotel,' a series of buildings on the way up to the Round Tower that we've not ever seen in use.