During Chinese New Year we made several visits to see the festival action out in Yu County, Hebei Province.

In the area are several ancient towns and fortresses that fill up with performers and visitors during Chinese New Year, making it a very lively and interesting place to visit.

As well as traditional performances of opera, we also saw an evening performance of Dashuhua, where molten iron is flung against tall walls to create a shower of sparks!

The Dashuhua performance is very popular, and tickets are difficult to source. We’d bought ours well in advance, but even so our guides had to rush around to clear people out of our seats and make sure everyone was in the right place.

The rushing around (and endurance of the extreme cold) was well worth it, as the performance was spectacular, something that’s only found in this one place of China, and only during Chinese New Year!

Read on to see photos from the performance, and of the other sights we saw while we were out and about. 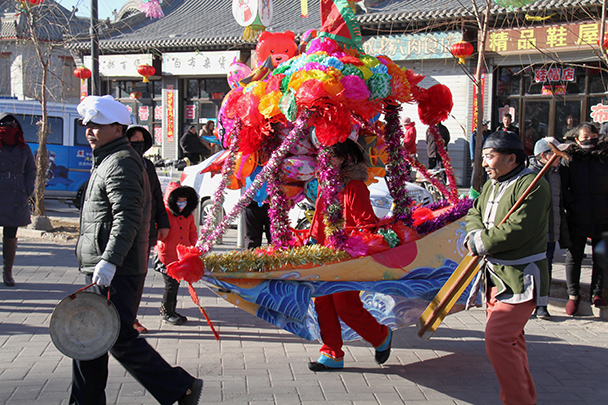 Performers on the way to the stage. 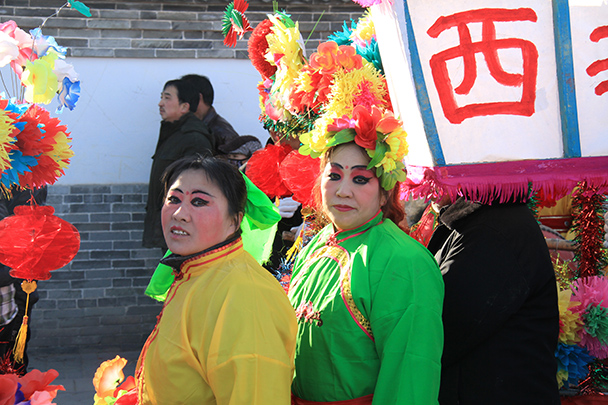 Two ladies from one of the dancing teams, looking a little scary! 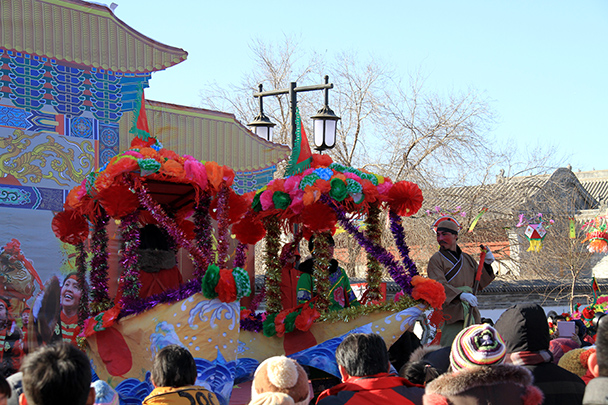 On the stage, a story is told using the floats and performers to act it out. 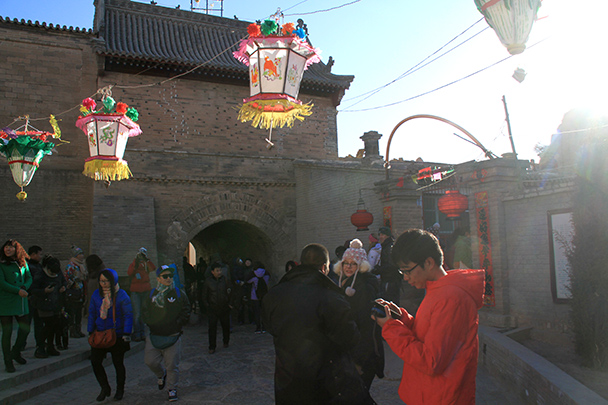 Walls and gate of an ancient fortress. 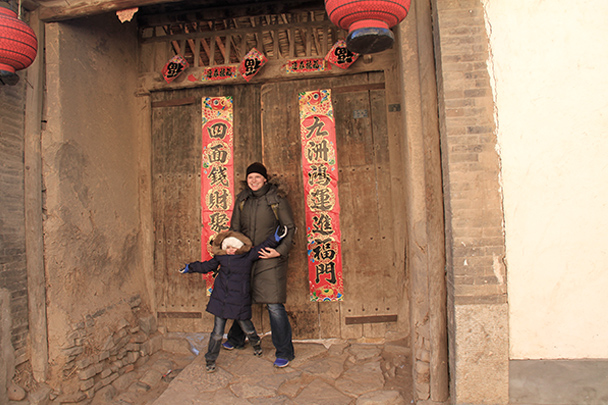 Old gates and a photo opportunity! 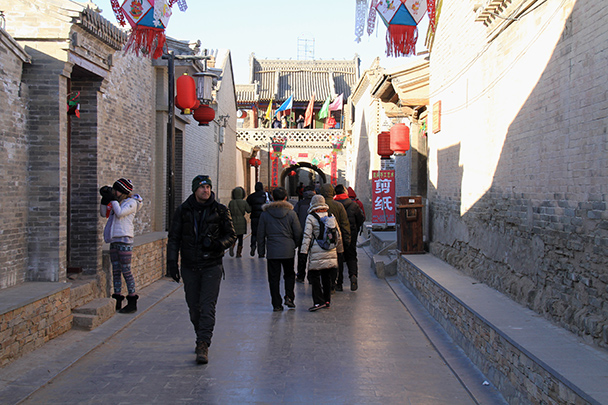 Walking along the main street of the town inside the walls of the ancient fortress. 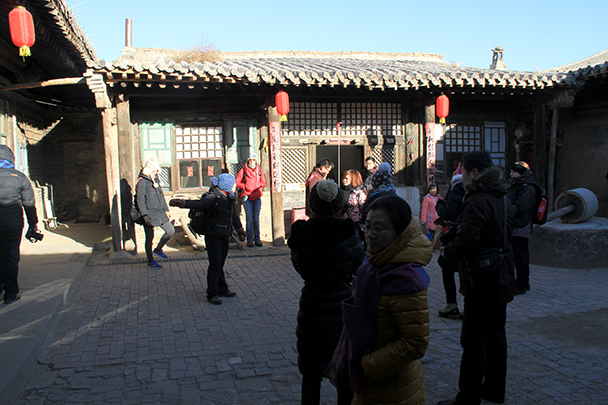 Huijie is translating information passed on by our local expert about this courtyard. 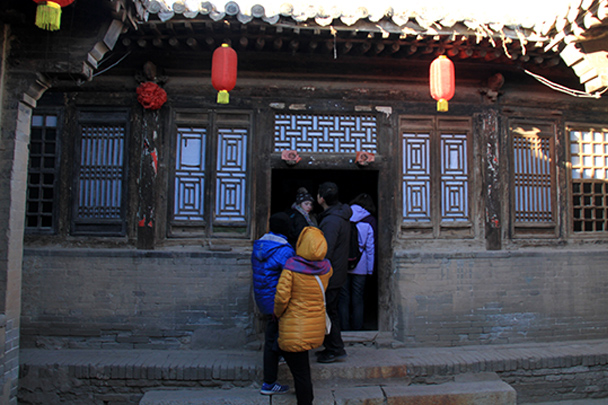 Taking a look inside an old courtyard house. 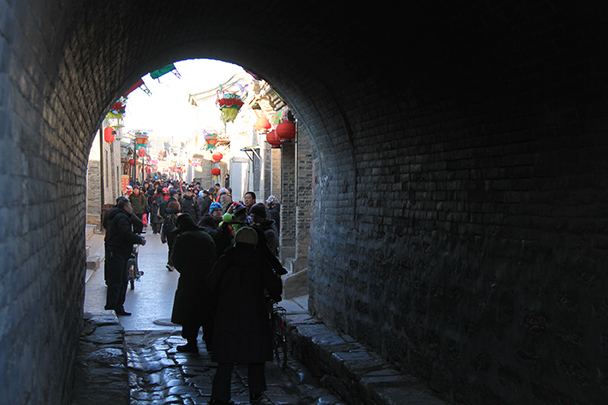 The walls of the fortress were very thick, with this entrance being maybe five metres deep. 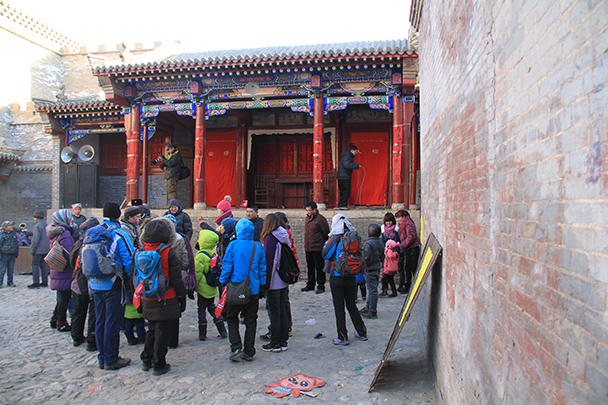 A stage for opera performances. 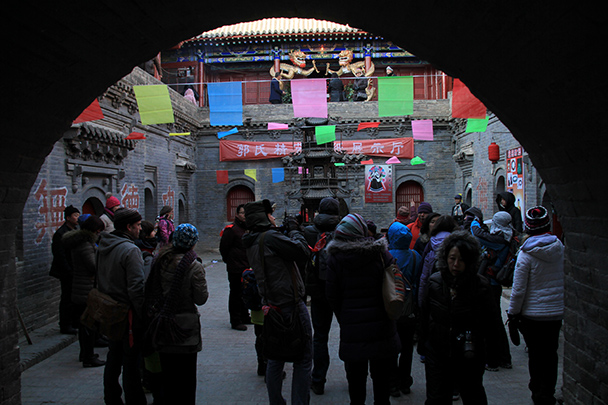 The courtyard of a big temple. 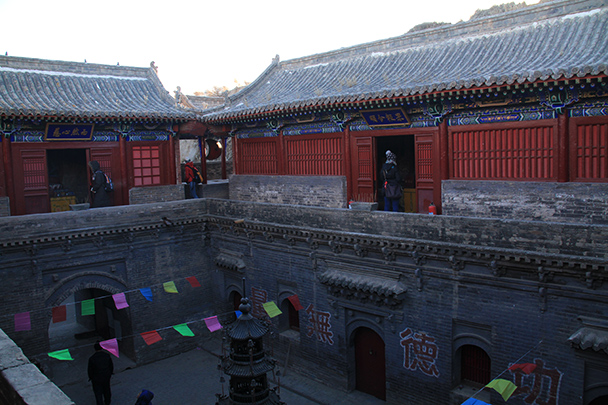 A view from above of the temple courtyard. 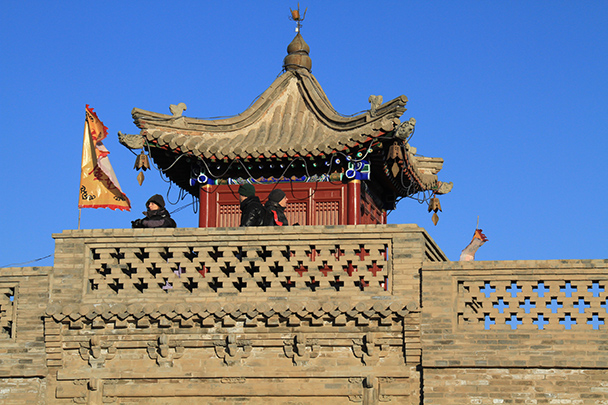 A lookout at the highest point of the fortress walls. 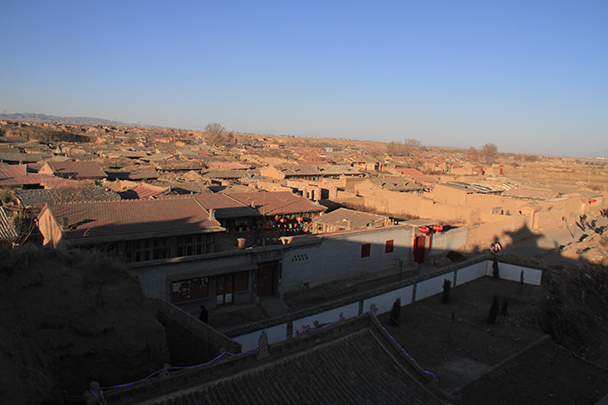 A view of the village. 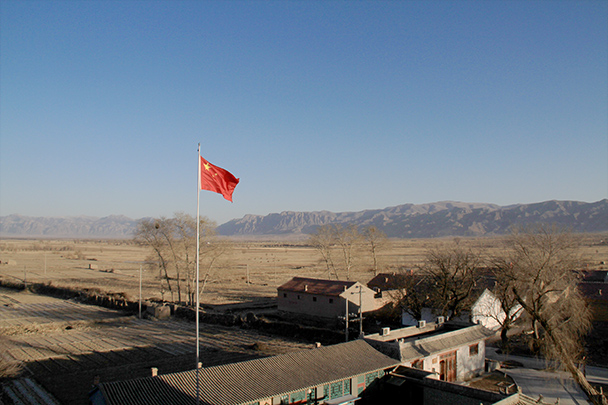 Outside the village are its fields, and then a line of mountains. 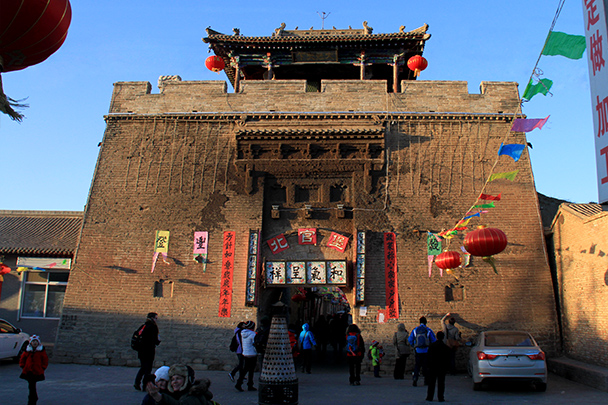 This huge gate is the original location of the Dashuhua performances. The dark discolourations are where the molten iron stuck to the wall. 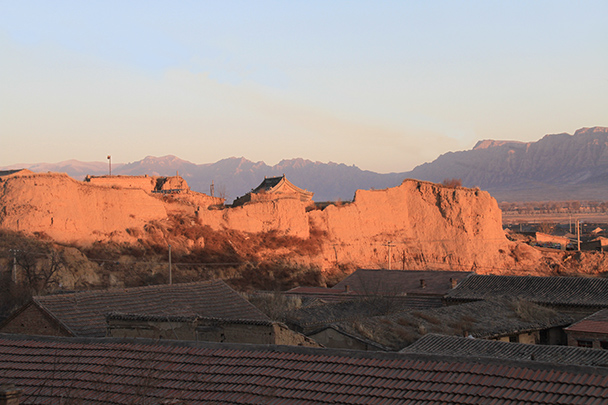 Sunset over the village. 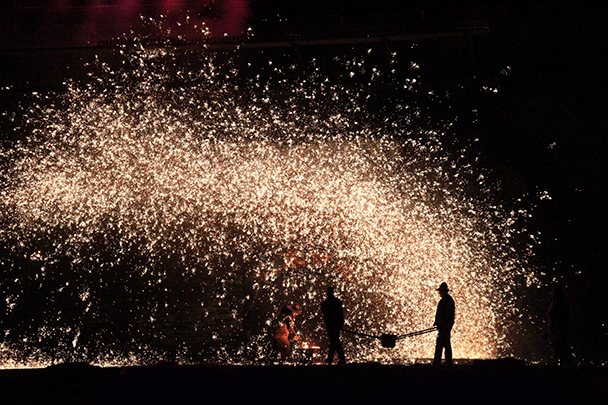 The evening show of Dashuhua has begun! 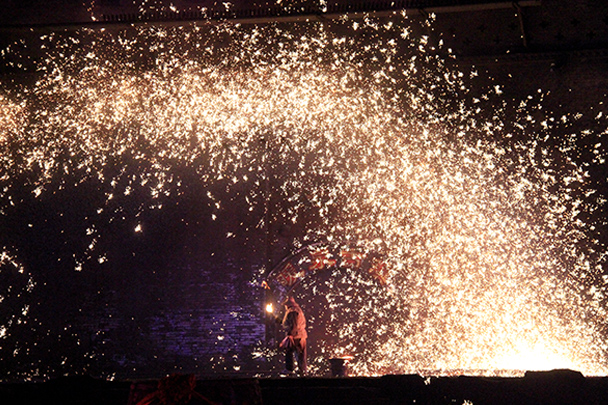 When the molten iron hit the wall, it exploded into a shower of sparks. 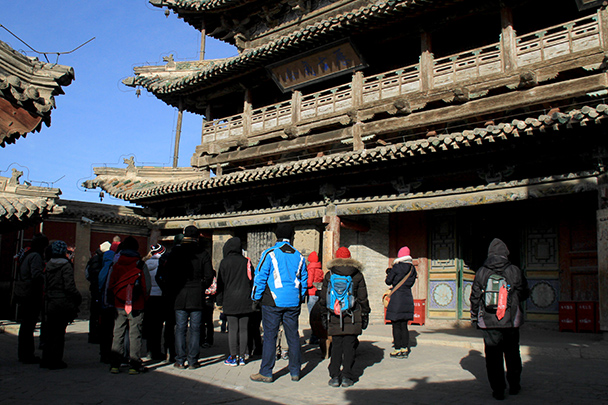 On the second day of the trip we visited another nearby ancient walled town, this one with an even bigger temple. 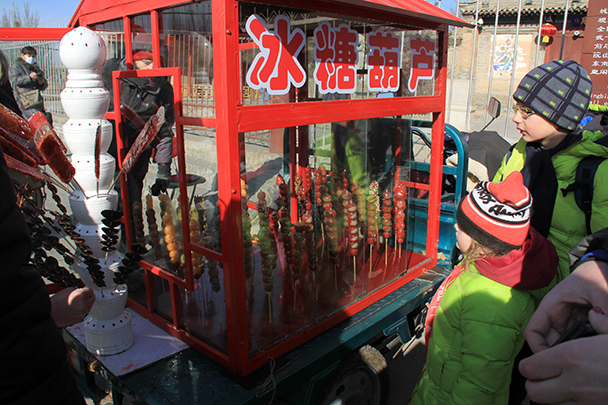 All sorts of sugary treats: hawthorns, strawberries, and apricots covered with a sugary glaze. 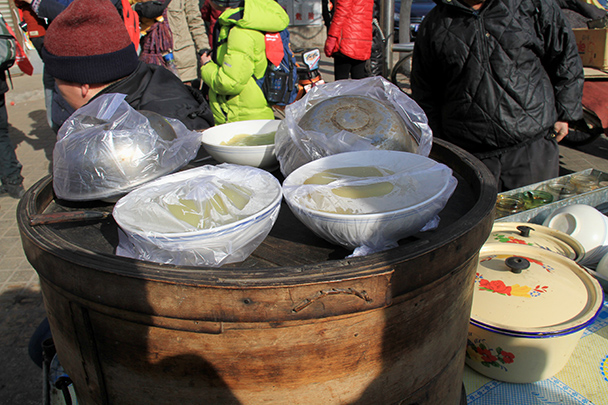 On the steamer are bowls of a starchy bean pudding, ready to be sliced up and covered with a tasty topping. 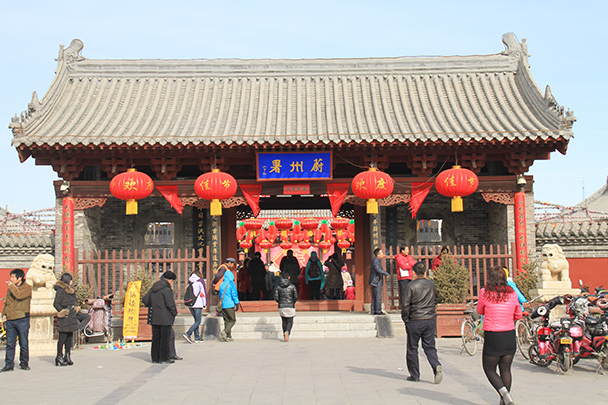 Another temple, with a busy opera performance taking place inside. 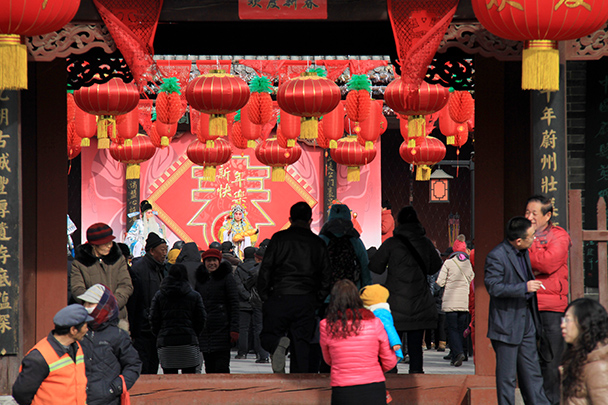 A view through the gates of the performance and spectators.