If the weather forecast is for heavy rain/thunder/lightning, we'll postpone this hike to Sunday, November 1.

This is a looping walk over steep and rocky terrain, with a lot of scrambling and climbing required to arrive at the highest point on the hike, the impressive Nine-Eyes Tower. On a clear day in this spot in the heart of the mountains it will be possible to see the towers of our Great Wall Spur and Chinese Knot hikes, and the Mutianyu Great Wall, with glimpses of other sections of the Great Wall that follow nearby mountain ridges.

After we've finished the hike, we'll be getting served a fine feast of fresh, Gung Ho! style gourmet pizza at the Gung Ho! Hut at Jiankou Village. More about that further down the page!

There are many sights of interest along the way, from ancient history (volcanic rocks and other geological features) to Qin, Qi, Ming, and Qing Dynasty* constructions, as well as signs of more recent use of the land.

We start out on a trail out the back of the village at Jiankou, climbing up and over a ridge and down again through a forest into an area that was used to farm cows. The stonewall cattle pens are still in evidence, although hidden in the undergrowth.

We’ll gradually head up the valley, turning off to climb a steep trail that leads to Er Dao Bian Tower, the start of the Nine-Eyes tower loop. Er Dao Bian roughly translates as ‘Two Roads On Each Side,’ and at this point in the hike we’ll be at approximately 900m above sea level. On the way up, keep an eye out for a massive free-standing chunk of rock, and an ancient stone oven that was built at the same time as the Great Wall and was still being used in the ’80s.

Nine-Eyes Tower is even higher – almost 1,200m above sea level. In its original condition it had three levels, and the lower level had nine windows on each side. It would have been an impressive sight, and still is to some extent. It has been slightly restored – the floor of the third level is now the roof, and the interior is very spacious compared to other towers in the area.

Around the back of the tower there are large stone tablets to look at. A spur of the wall continues to head north; we’ll head west on another stretch, following the wall to a spot with a view of a ancient walled army barracks before retracing our steps to a shortcut back to Er Dao Bian Tower.

After everyone is back at Er Dao Bian Tower, we’ll follow the wall south towards the Chinese Knot section, passing around and over ten towers. The first four towers are not in the best condition, but after a while we’ll be back on to solid footing. At the tenth tower, we’ll leave the wall and follow a trail back to Xizhazi Village – steep and slippery at the beginning, flattening out as we pass through the villagers’ orchards and fields.

Once we're done with the hiking, we'll head to the Gung Ho! Hut for large amounts of pizza and drinks before heading back to the city. 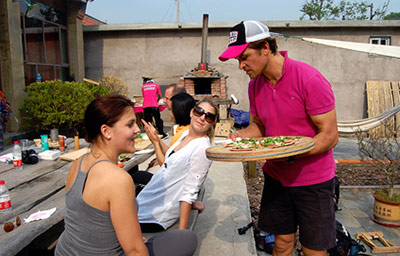 Pizza served fresh from the oven.

When we heard that award-winning pizza purveyors Gung Ho! Pizza have a pizza oven out at Jiankou we knew that we had to make a Pizza Hike happen. We tried it out in 2012, went back for seconds in 2013, thirds in 2014, and this year we're going back for even more.

Gourmet pizza by the Great Wall, hosted by Gung Ho! John? Yes, please! Click here to take a look at the Gung Ho! Pizza menu on their website, and see what a fine bunch they are.