Note: Because it's not Chinese New Year we probably won't be able to see all the performances that you've seen in the photos from our previous trips. But you won't freeze, either!

On this two-day trip to Yu County in Hebei Province you’ll walk the streets of well-preserved Yuxian Ancient City, visiting the pavilions and pagodas, as well as visiting Jimingyi, the remnants of a Ming Dynasty postal relay center. And, on the first evening, we’ll take in a performance that includes Da Shu Hua, a 300-year old local tradition that translates as ‘making a tree of flaming flowers’ and results in molten iron being flung against the city walls in lieu of a fireworks display!

Yu County is part of the larger Zhangjiakou prefecture-level city in Hebei Province. Zhangjiakou is right on the main route to Beijing from the northwest, and has been the site of fortifications and wars since ancient times – notably, the Badger’s Mount Campaign in which Genghis Khan won a huge battle against the Jin Dynasty in 1211. Zhangjiakou used to be known as Kalgan, which is a transliteration of its name in Mongolian: The Gate. 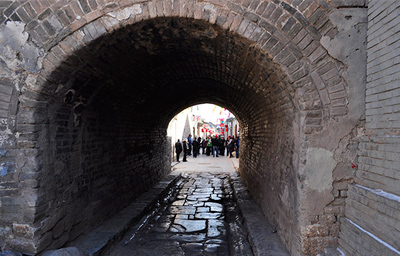 An arch in the thick walls of Yuxian. Click to see six more photos from Yuxian

There’s been a town at Yuxian since the Southern and Northern Dynasties period (386-589), with the area at the time being under the control of the Northern Zhou Dynasty (557-581). The ancient city was rebuilt in 1377, during the Ming Dynasty, and a lot of that construction remains and is well-preserved—some say it’s the closest best-preserved ancient city to Beijing.

The key sights in the Yuxian Ancient City are the Jade Emperor Pavilion, the Nan’an Pagoda (Liao Dynasty, 907-1125), and the Buddha temple.

Close by to Yuxian is Nuanquan Town, notable for a site named Xigubao, or the West Castle. The castle was around 67,000 square metres in size and surrounded by high walls of rammed earth. Key parts of the walls were strengthened with brick, and the structure followed a defensive pattern known as The Urn, whereby attacking enemies could be trapped between inner and outer gates ‘like turtles in an urn.’

As well as the castle, Nuanquan is famous for a tradition of papercutting – on our scouting trip, we picked up some really good ones! 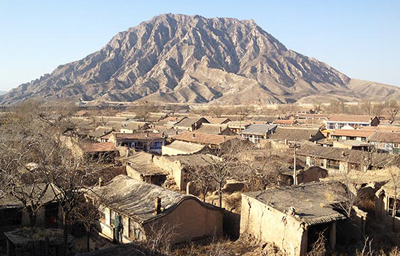 The old town of Jimingyi, with Cockscomb Mountain in the distance. Click to see two more photos from Jimingyi

Jimingyi Ancient City was a fortified postal relay or staging station, built and used during the Ming Dynasty. The extremely tall and thick walls have a total length of just under two kilometers, and were constructed in the same manner as some of the Great Wall: rammed earth in the middle, with an outer layer of bricks.

In the past, this must have been a very important place: as well as the huge walls, other fortifications include large gates topped by towers, towers on each corner of the main walls, and more outside. Inside the walls, there are five main streets that divided the city into planned and orderly sections - administration in the middle, stables and barns at the north, and other areas for accommodation. 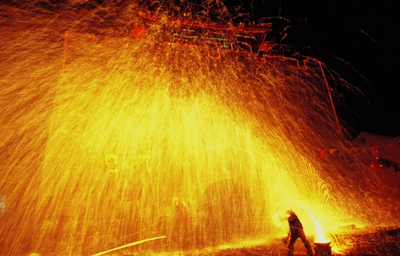 Throwing ladles-full of molten iron against tall brick walls creates a fireworks-like sparkle that looks like the canopy of a leafy tree. The dashuhua (making a tree of flaming flowers) performance has been a local tradition in Nuanquan Town for over 300 years, said to have come about because of the many blacksmiths of the town.

These days, it’s done part of a performance that includes a song and dance routine that illustrates a local legend that culminates with swords being melted down to revive a maiden who’d given her life in order to make the swords better, on the advice of a magician.

Whether there are magicians about or not, it’s still a spectacular sight, and the performance is likely to be attended by quite a crowd. The performance lasts for approximately an hour, and the splashing about of the molten iron comes and goes at intervals – last visit, they did 4 or 5 sets, with each set about 5 minutes long.

We’ll stay a night in a 4-star hotel. Each room at the hotel has a private shower and bathroom, and towels and bedding are provided. You’ll be sharing a room with another hiker. If you'd like a room to yourself, it can be arranged at an extra cost, if a room is available—usually not a problem!

Main meals and drinks, plus water to drink during the hikes, are included in the price of the hike. We'll be eating Chinese food at restaurants in the towns. Breakfast on the second day is at the hotel. Bring some snacks and some spending money to buy extras. Please let us know if you have any special dietary requirements or food allergies.

What to bring on this trip