Passport required: entrance at the War Tunnels is free, but they need to see a passport. We might also need your passport number the week before the hike so we can make a reservation for our visit.

On this hike we've joined two shorter trails to make a good long hill-walking trail that will show some very interesting sides of the Beijing countryside, and you'll get a good workout along the way!

The first thing we'll take a look at is a restored tunnel warfare site, dug out in the late 1940's. We'll take a super-quick tour of the 800m of tunnels that are open to the public. When we'll drive on to a nearby small village to begin a good long walk through the hills.

We'll end up at Yaji Mountain, where we should find their annual temple fair in full swing. We should find it in full swing, but one time we went they'd been shut down a few days early. We'll check for sure before we head out, and if the fair has finished we'll hike up to the temples instead.

The rural districts and counties of Beijing contain many interesting places that you could drive right past without noticing. One of the places we'll visit on this trip is even harder to spot—a system of tunnels built under a village in the 1940’s for use as part of a guerilla warfare strategy. We’ll stop for a 30–40 minute look about the war tunnels, not far from where we'll begin the hike. 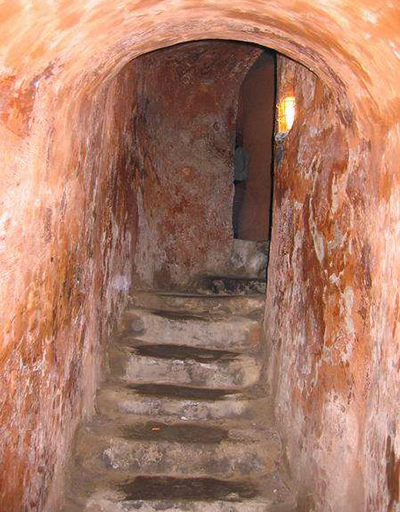 Inside the War Tunnels.

In Chinese territory occupied by Japanese forces it was common practice for local inhabitants to be conscripted to work for the Japanese. As well as searching villages for people who could be forced to work, grain and other supplies were also found and taken away.

In the autumn of 1938, Communist party soldiers came to the village and began to organise the villagers – arming them, and training them in guerilla warfare.

The first phase of tunnel digging began as a way to hide stores of grain or rice, and sometimes people.

As the holes became larger, the villagers started to make tunnels between holes, and eventually the tunnel system grew to a length of 11km.

The tunnels began as simple holes in the ground, and were extended over the course of seven years to form a full tunnel system that featured meeting rooms, gas traps, and storage space for water, food, and munitions.

The tunnels joined many of the houses in the village, and some of the hidden entrances and exits – underneath beds, below grinding stones, inside animal pens – have been restored for visitors to use.

At the site of the tunnels, we’ll first visit the Exhibition Hall for an introduction to the historical background of the tunnels. Then we’ll head underground to explore the restored section, a 650 metre stretch of tunnels that has been enlarged and had lights added.

In the rolling hills nearby the tunnels there are several old trails between villages. Sometimes we follow the trail that finishes at ‘Gold Mountain’ Village, a small settlement named for the wildcat gold mines in the surrounding hills, but today we're going to make the hike longer by finishing at Yajishan.

The trail leads up and over a ridgeline, and this is the only big climb of the whole hike.

Down in the valley are a few farms. Back in 2004, there were only around 40 people living in the valley. There were plans to build villas and an equestrian facility by the village, but in the end only a few villas were built.

We'll walk out the valley and around towards Yaji Mountain to find the temple fair. 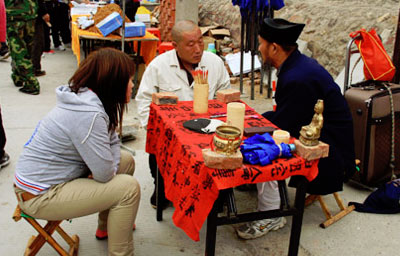 A fortune teller at the fair.

If we arrive early we'll visit the fair first. Otherwise we'll stop for a big meal at a village restaurant before walking over to the fairgrounds.

There are three temples built on Yaji Mountain, and they are locally famous. Every year there is a fair in a field below the mountain, and it's a lively and busy time to visit. We'll have time to get a good look at what's going on – fortune telling, street food and snacks, fireworks and incense burning, various performers – before our big meal and the drive back to the city. (We're not planning to climb up to the temples today – too steep!)

Take a look at the trip reports below to see what was happening at the fair on previous visits – very entertaining!