Zach was recently featured in Agenda Magazine, in a great interview about hiking in Beijing. If you didn't see it in print, follow the link to an online version of the interview, which includes his tips for good places to get a beer after hiking! 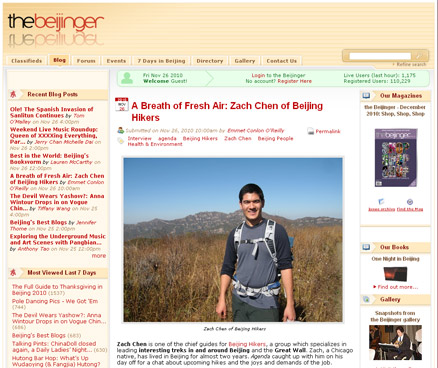 Here's a transcript of the interview:

A Breath of Fresh Air: Zach Chen of Beijing Hikers

Zach Chen is one of the chief guides for Beijing Hikers, a group which specializes in leading interesting treks in and around Beijing and the Great Wall. Zach, a Chicago native, has lived in Beijing for almost two years. Agenda caught up with him on his day off for a chat about upcoming hikes and the joys and demands of the job.

Is this a demanding job?
Yeah, it is, I’m out hiking three days a week and then the other two days, I’m doing things around the office. That ranges from helping set up hikes to arranging private tours as well as coming up with new ideas. We’ve gotten really busy in the last couple of weeks spending extra time out on the trail to clear some of the more overgrown paths.

Are these new hikes, then?
Some of them are new – we’re always looking out for new hikes. Others have been around for a while and have become more overgrown. A lot of the trails we use were originally used to get from one village to another, so more and more of these roads are falling into disuse.

Do you get a big mix of people on your hikes?
Yeah, a huge mix. In the past, it’s mostly been expats living in Beijing, though we’ve started to see more and more tourists come through. More locals as well.

Are there many regulars?
There are definitely some regulars. We have a membership which is well worthwhile – sign up for RMB 200 per year and get a bit of a discount on hikes. So there is something of a community. A lot of people remember each other from previous hikes. Apart from getting outdoors and getting good exercise, it’s also a great way to meet people.

How big are the groups for your hikes?
Well, this is our busiest time of year. We max out at 30 people. That’s the most we’ll take out but I don’t think we’ve had less than 20 lately. It sounds crowded but you’ve got a big mix of folks – some want to go really fast and treat it as one of their weekly workouts and others just want to hang back and take photos, so the group ends up getting spread out.

It’s usually two guides per hike. Somebody at the front of the hike and someone at the back to make sure nobody gets left behind and everybody is safe.

You mentioned that this is your busiest time of the year. I’m guessing that it’s a good time to go hiking around Beijing because of the weather.
Yes, definitely. The sky is clear. We recently had seven blue sky days in a row and the temperature is a big part of it. The leaves are starting to turn too so it’s nice to take in the scenery. I mean, every time of year is a little different. Winter is fun too because you get to see some pretty interesting scenery in the snow.

Do you have a favorite view you’ve come across? Is there a particular sunset that stands out in your mind?
I’m a big fan of the hills out to the northwest out in Yanqing County, but it’s all different. It’s hard to say, really.

How do you guys earn your money? Anyone can get a bus to the Great Wall and start hiking, so what do you offer that’s extra?
First of all, there are so many different places we take groups that even locals don’t know about. We’ve got a really broad catalogue of places that people either wouldn’t know how to get to or wouldn’t think to go to. There’s also our focus on safety and service. If there’s a larger group of people, we make sure there are enough guides to make sure everyone is looked after. Beijing Hikers just sponsored me and my colleagues to go to first aid training by International SOS. The post-hike meals are also included in the fee – they are quite popular.

It’s a hassle-free way to get outdoors. A lot of the expats in Beijing are from places where they are used to being able to just go outdoors for a walk or go out somewhere on their own. Here, they may not drive or speak Chinese or be familiar with the countryside; getting out into the countryside for them can be such a hassle. We take that away – all you have to do is show up and be ready to hike.

Have you come across much interesting wildlife?
I’ve seen some snakes which were pretty neat. Once I saw a deer. Mostly it’s birds and lizards, though with the weather getting colder they’ll be heading underground at this time of year.

What are the challenges and frustrations of this line of work?
Every now and again you get some people who have signed up and they haven’t really thought through what it means to go hiking. Thankfully, we haven’t had anyone show up in high heels but it hasn’t been far off. The challenge is when someone isn’t really prepared. Most people know what to expect. People who have heard of us through word of mouth also tend to be better prepared. Every now and then we’ll get a tourist who thinks it’s more casual than the reality.

Have you ever had to carry anyone on your back up a mountain?
I haven’t had to carry anyone yet but over the summer, the heat was too much for quite a few people. Every now and again we’d have to walk somebody back to the bus earlier than expected. We made sure everyone was taken care of.

Does it bother you that fees are charged to access the Great Wall and other sights?
Well, I have a back-ground working in the outdoors in the US and it’s organized completely differently here. So there are things that I’m just not used to, like access fees. Part of it is that outdoor recreation is emerging here. It’s just something you take in your stride and realize that it’s an evolving situation.

What one piece of advice would you give people who are tempted to join one of your hikes?
Shoes, definitely good shoes. I know it’s unrealistic to expect people to pack hiking boots if they’re on holiday and the hike is just one day out of their trip. But they should wear at least athletic shoes or something like that. Warm clothing is a must-have as well.

After a good hike, where’s your favorite place in Beijing to celebrate with a beer?
I don’t get out too much these days but there are some nice places near some of the hikes. We like the Irish Volunteer on Jiangtai Lu. That’s nice for a pint or two after work. Sanlitun is always good but in particular, I’m a big fan of The Tree and Nearby the Tree.

When you’re out hiking, do you ever think, “God, I’d love an office job”?
No, not a chance. The other week I was out with a local farmer cutting trail. We were out there for hours in the pouring rain and all I think could think was: I’d much rather be here right now than in front of a computer screen somewhere.