After quite a bit of rain in the preceding week, the skies cleared just in time for the weekend. On this trip, we were in Miyun District, north of the big reservoir.

Part of this hike follows the White River; the other part is a climb up on to Dragon Cloud Mountain, part of the cliffs that overlook the river valley. It was unusually clear for a summer day near Beijing, which made great views of the surrounding peaks, cliffs, and valleys.

After we had a good look about, we headed back down to the river, and headed upstream. We followed a nice shady trail beside the river, aiming for a ford further up.

There had been a large storm a few days before our hike, and the river was running high and was carrying a lot of sediment from further upstream. Crossing over, we got a little more wet than usual, but on such a hot day that was perfectly all right!

Mountains and the river

We started by the side of the river. 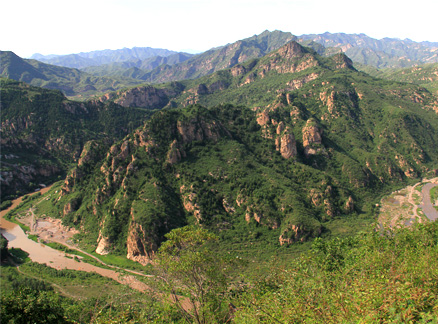 A view from up on top.

Soon before the area was designated as a park, a reservoir was built on top of the mountain. It was built to hold water for the irrigation of nearby orchards, but was hardly used.

Getting ready to cross over.

Further downstream, the river was running high and fast.

A wide variety of flowers of different colors, shapes, and sizes were in bloom in the area.

This species of striking red flowers produces an extra blossom every year, allowing one to know the plant’s age by counting the number of buds and flowers it has in bloom.

This flower is ready to scatter its seeds to the wind whenever a strong breeze blows.

These delicate flowers were as fragrant as they were beautiful.

The Longyunshan is also home to numerous species of brightly colored insects.

A red dragonfly balances on top of the end of a twig.

Many types of insects were attracted to the flowers and could be seen pollenizing them.

We also saw this bizarre looking caterpillar along the trail.

A couple of two toned beetles, with yellow backs and blue undersides.

In many of the rural areas we visit, we find fresh local produce for sale. Sometimes we find wild fruit to eat, too.