Large areas of northwestern China are sparsely populated, and contain stunning scenic locations unheard of by outsiders. On this trip, the highlight was the magnificently multi-coloured mountains, valleys, hills, and cliffs of the Zhangye Danxia.

Danxia landforms are sandstone formations, known for being very dramatic and colorful, and those of Zhangye are no exception. Danxia refers to isolated peaks, steep pillars, ravines, mountains and hills that have formed after a long period of erosion by wind and running water.

On this trip, we did two days of hiking in the hills, fitting in a visit to Jiayuguan on the way home. Jiayuguan is a large fortress at the western-most end of the Great Wall built during the Ming Dynasty (1368-1644AD) 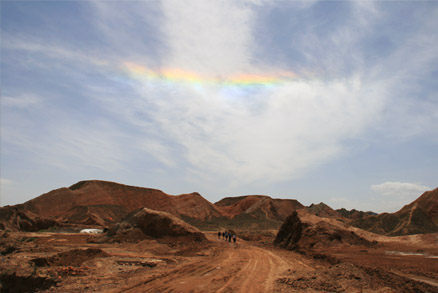 We spotted a rainbow as we started hiking on the first day.

Taking a break amongst the colourful hills and valleys.

The colours are almost unbelievable!

We took a break to do a group shot.

More of the colourful hills.

These are the flowers of Suoyang, a root with medicinal properties.

We had a fit group of hikers, and were able to do more trekking than originally planned – always a good thing!

Over time, the rock has been weathered by rain and wind, making strange shapes.

We hiked up to a lookout.

One of our group took a break from hiking to ride a camel.

We went hunting for interesting rocks, hoping to find some jade.

A spectacular view of the stunning colours.

A group shot at a look out

Another type of flower.

The Great Wall at Jiayuguan.

The group at the Jiayuguan Great Wall.

We visited a museum that had exhibits about the history of the Jiayuguan area.

Not sure what this is, but it looks like fun if you’re mouse-sized.