We began the day’s hike with a climb through the forest that took approximately 40 minutes. Along the way, we passed through a pine forest that is a good place to hunt for mushrooms and medicinal herbs. We often see donkeys carrying loaded baskets in this area, a vestige of traditional village life.

At the top of a hill is a broad plateau where we stopped for lunch, and after a rest break, we started the descent to Dajue Temple. It’s quite a peaceful area, and on previous visits we have seen people meditating and playing flutes.

Dajue Temple was built in 1068 A.D., during the Liao Dynasty (916-1125 A.D.). Since then, it has been expanded, repaired, and renamed several times. The majority of the buildings on the grounds now date to the Ming and Qing Dynasties (1358-1644 A.D. and 1644-1911 A.D.). The temple complex is expansive, and contains much to explore - five major buildings – and huge, ancient trees are also found on the temple grounds, mainly old pines and cypresses. 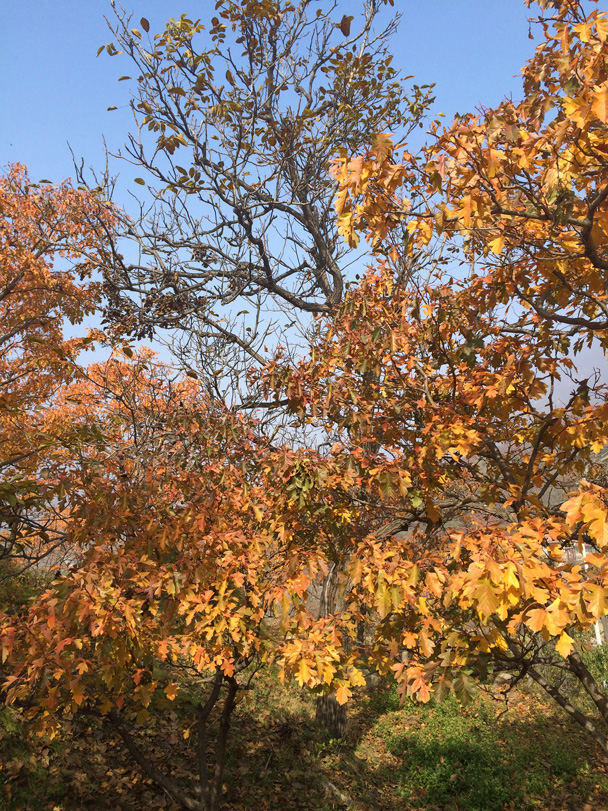 Hawthorne trees with bright autumn foliage looked beautiful against the backdrop of the clear, blue sky. 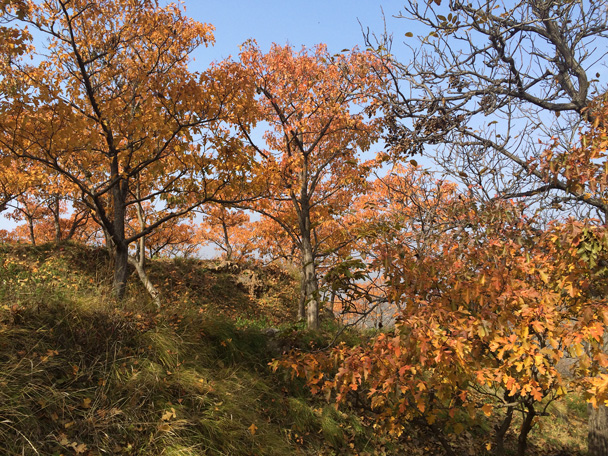 The trees grew in clusters on terraces that covered parts of the hillside. 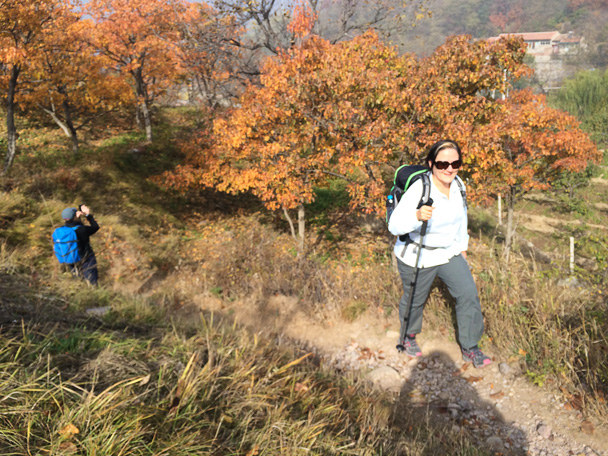 A lovely day for a walk. 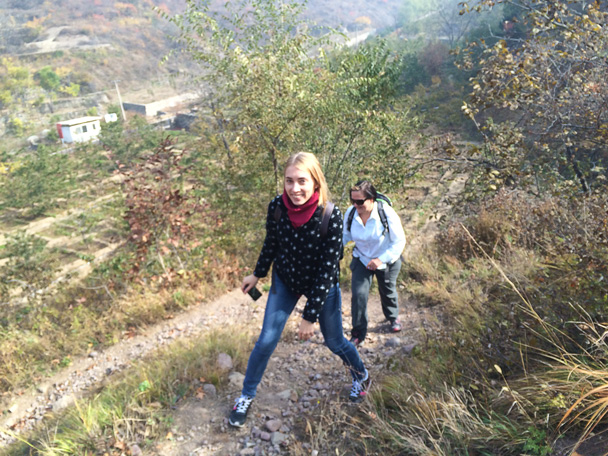 Hiking up the old pilgrims' path. 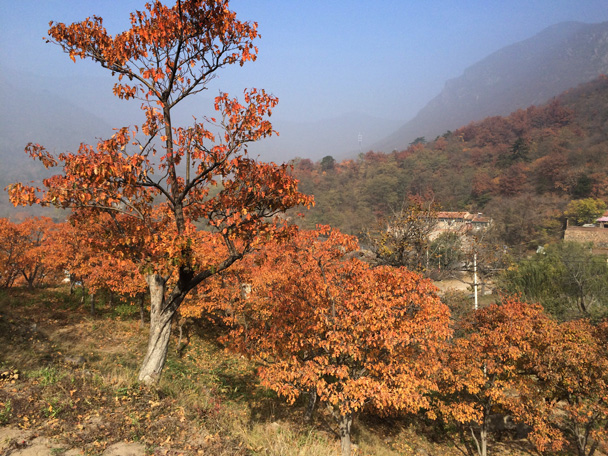 Our views included hills and farmland in the background. 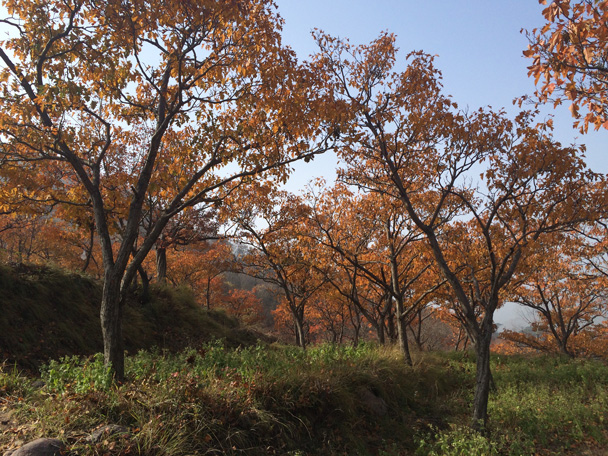 We passed through an orchard of Hawthorne trees. 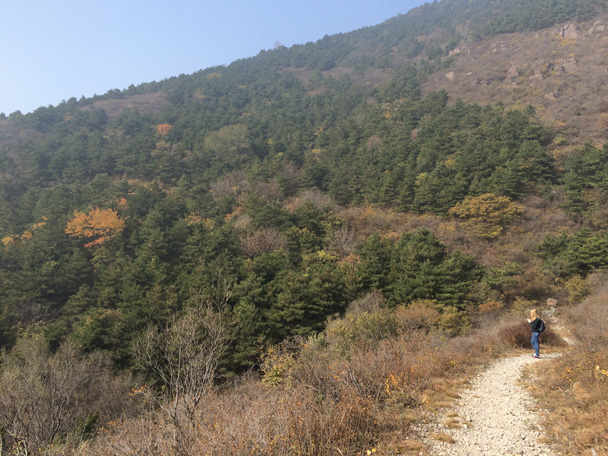 A hiker pauses to enjoy the scenery. 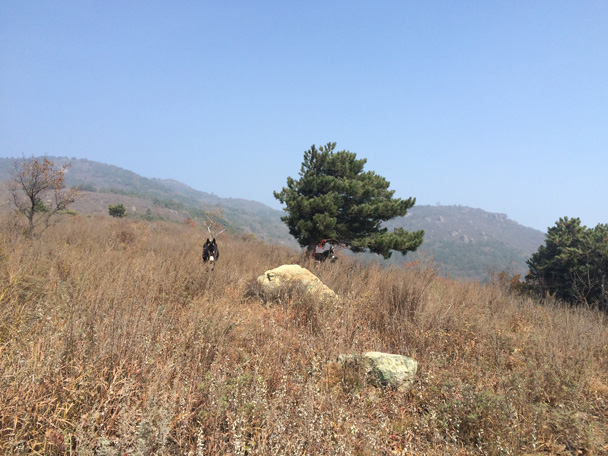 Donkeys are still used as work animals in the area. 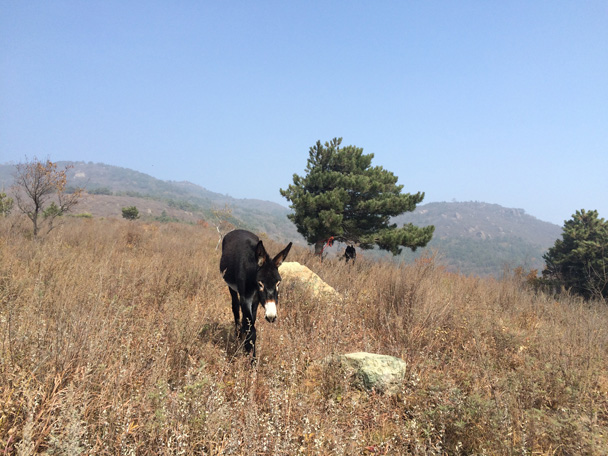 This one, however, has seen the apple the photographer is holding in her hand and comes in for a closer look. 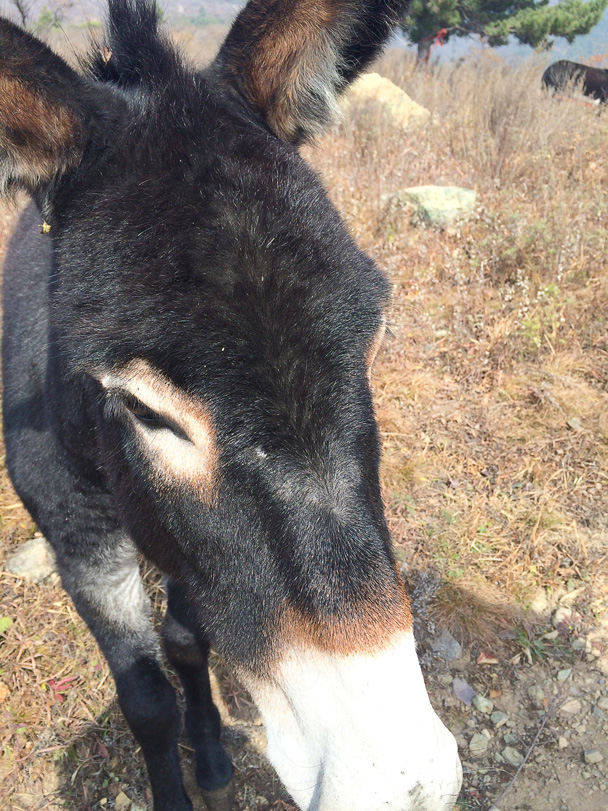 And closer, and even closer … give me that apple! 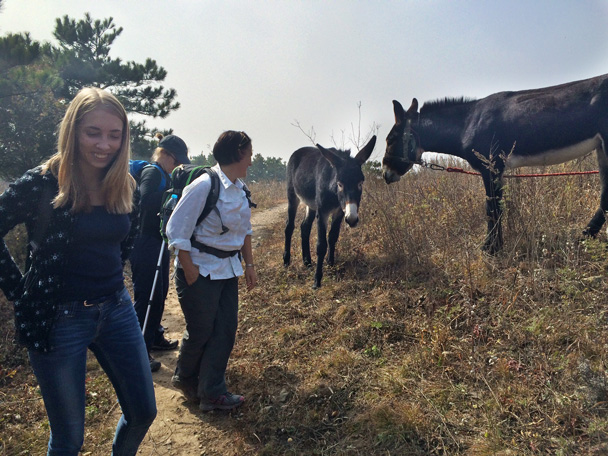 Saying hello to the donkeys. 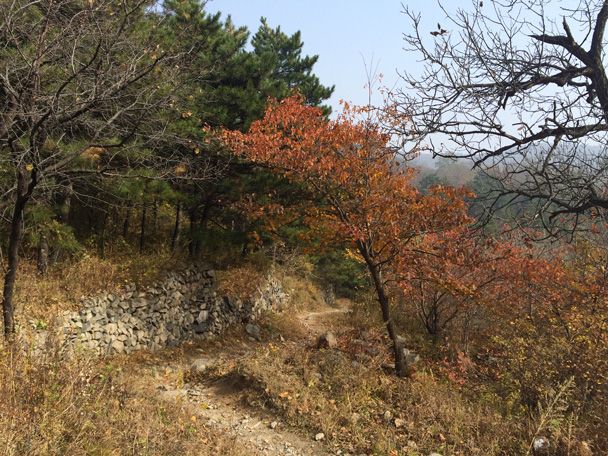 Much of the path is flat and gentle as it passes through the countryside. 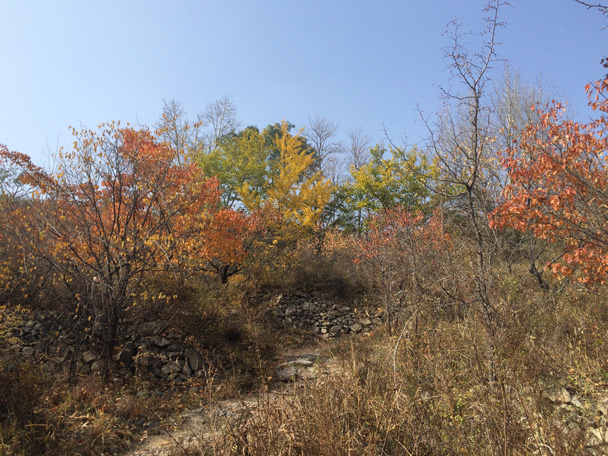 The forest was filled with brightly colored autumn leaves. 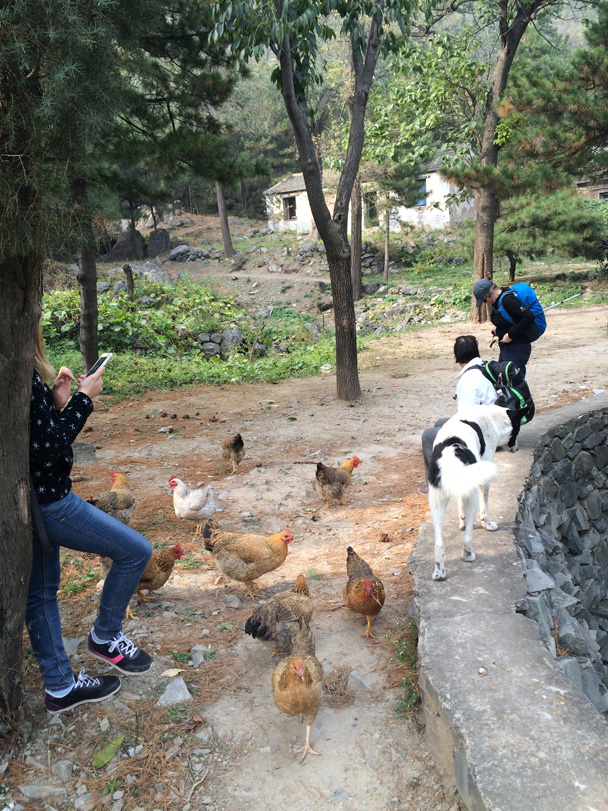 The chickens belong to the local fire warden, who lives a solitary life in the hut in the background. 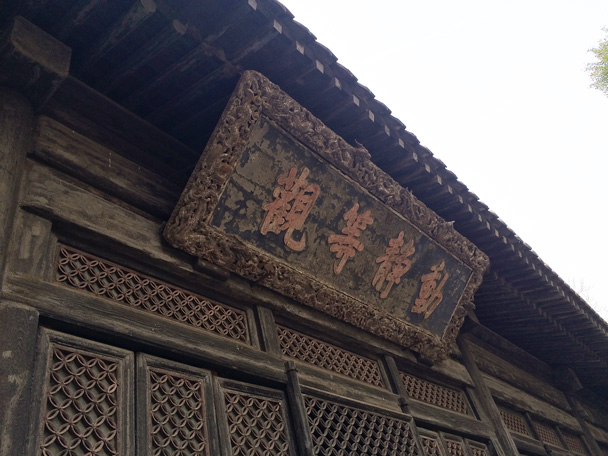 One of the buildings on the grounds of the Temple of Enlightenment. 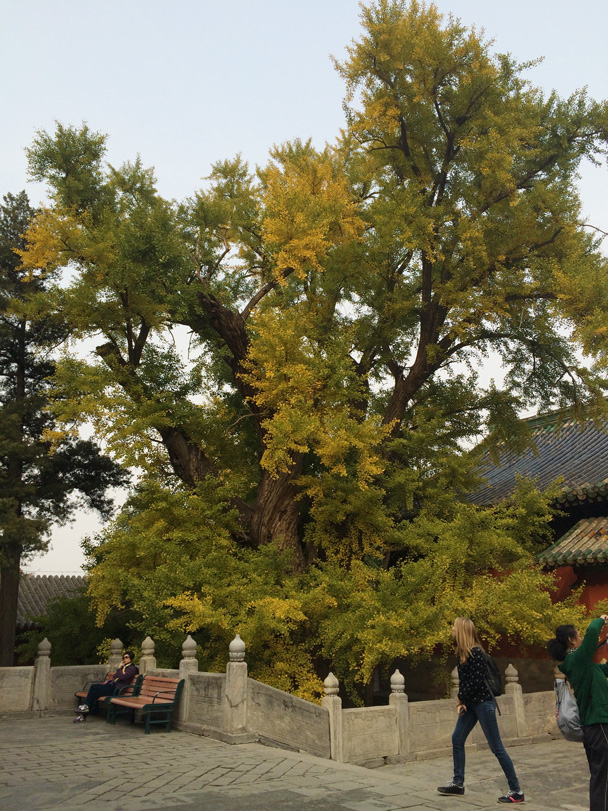 The leaves on this ancient ginko tree on the temple grounds had also started to change color. 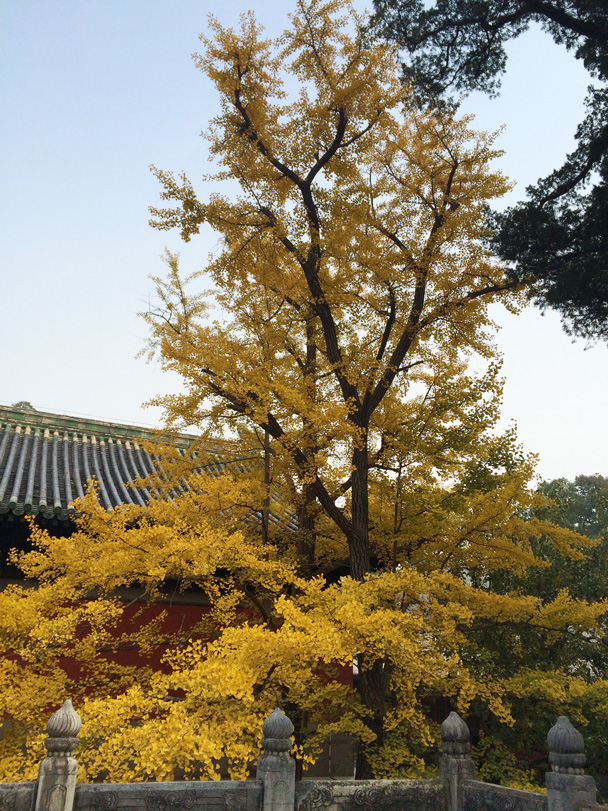 Some of the other trees at the temple had already turned golden yellow. 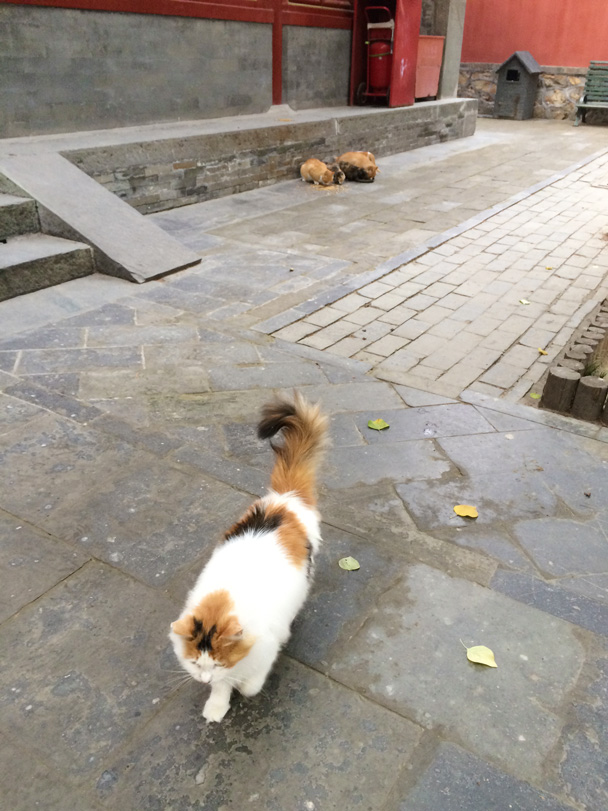 Some animals, such as cats and chickens, also inhabit the temple grounds. 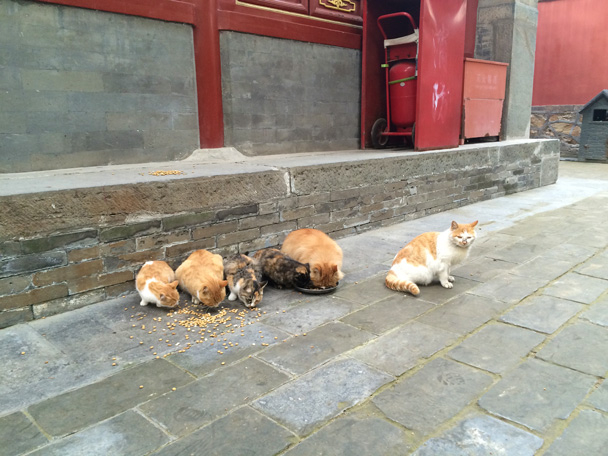 Feeding time for the resident cats! 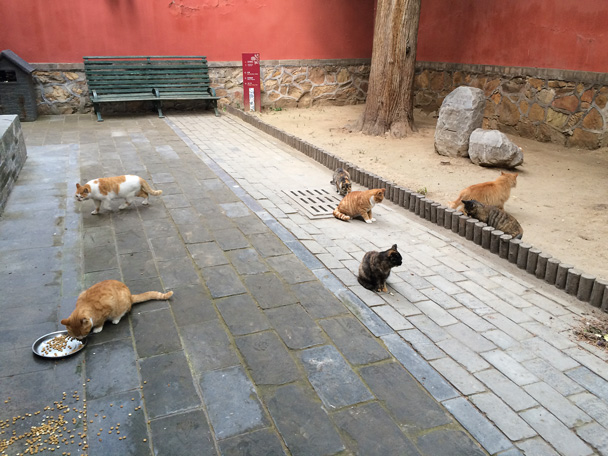