This was a special teambuilding trip for the employees of the Swedish Embassy in Beijing. Every year we help them choose a good spot for a great hike that has options for faster hikers as well as those who'd like a more relaxed outing.

This year we went to the Taoist temples at Yajishan, a scenic spot where steep stairs ascend to the two temples at the top, passing smaller temples and shrines on the way.

We began the day just outside the embassy, where we all met up before boarding the bus. And after a not-too-long ride, everyone was ready to get going.

We started at Xiaoyun Temple, the first temple on the trail, climbing a short stretch of stairs to Dongyue Temple, where we learned a Taoist greeting.

From Dongyue Temple we made the big climb all the way to Bixiayuanjun Temple, right at the peak of Yajishan – quite a climb! On the way to the top we stopped to look about the other temples and shrines, where we saw statues, murals, and friezes that depict parts of the belief and practice of Taoism.

After a break at the highest point the hiking group split in two, with one group taking a shorter and easier walk down a valley beside the mountain, and the other group taking a longer trail through the hills behind the temples.

Both trails finished at the same place – one of our favourite countryside restaurants. And there we found a delicious feast of country-style cooking, just what was needed after a good day out walking. 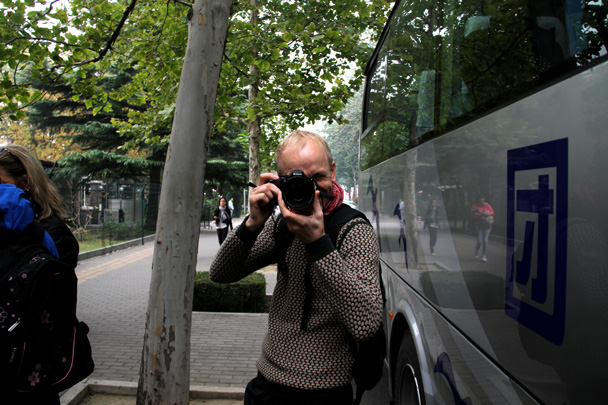 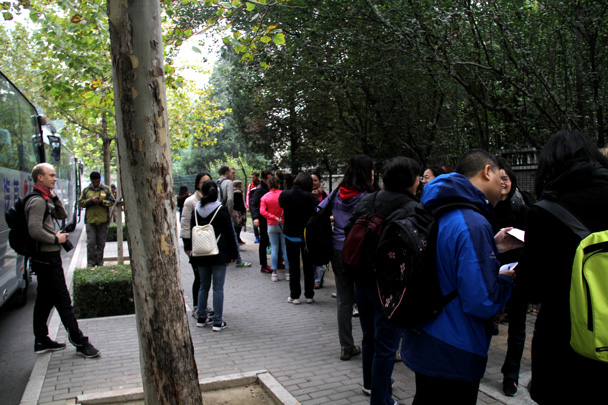 Getting ready for the departure. 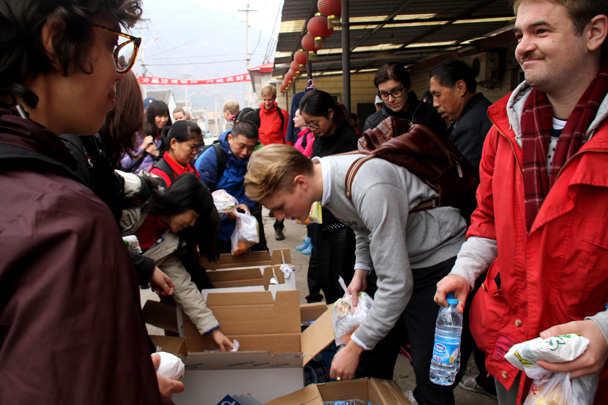 At the beginning of the hike snacks and drinks were distributed. 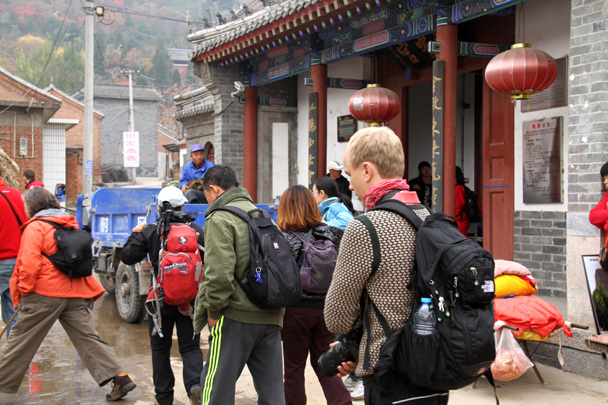 Xiaoyun Temple, at the start of the trail. 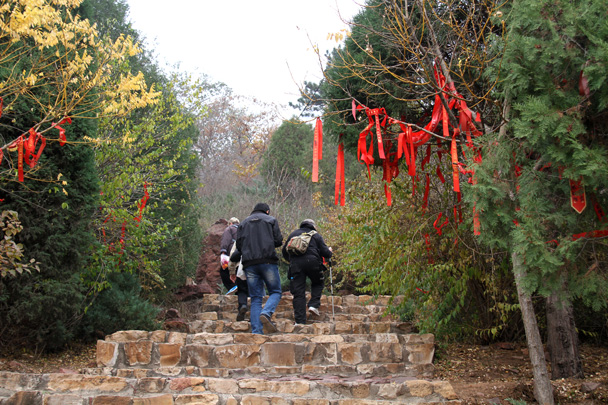 The red ribbons beside the trails are marked with Taoist blessings. 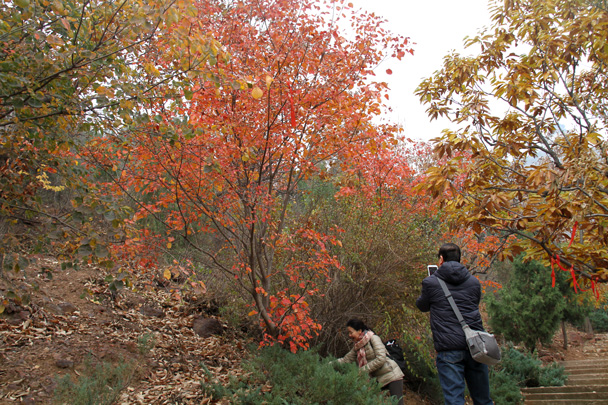 Autumn colours in the trees. 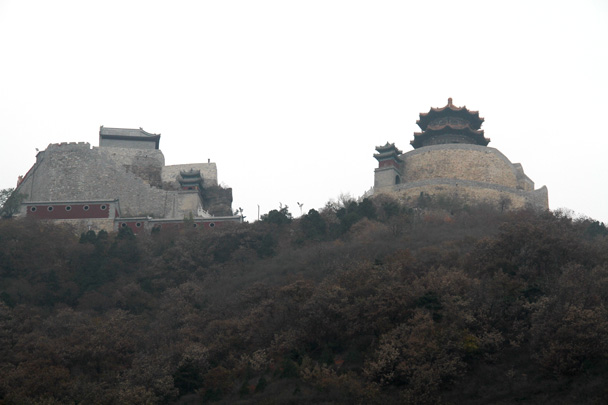 Looking up towards the temples at the top. 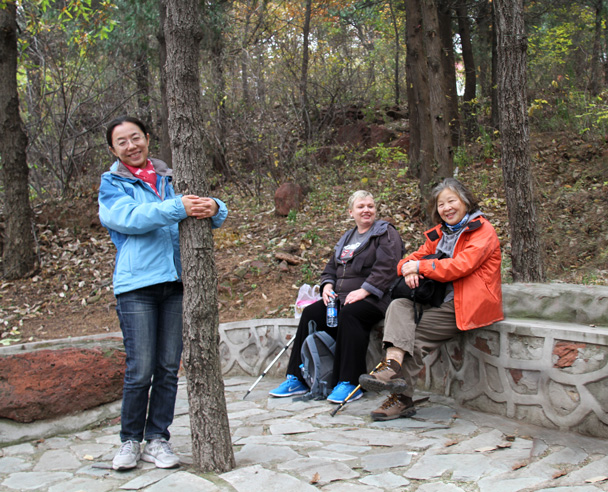 Taking a break beside the trail. 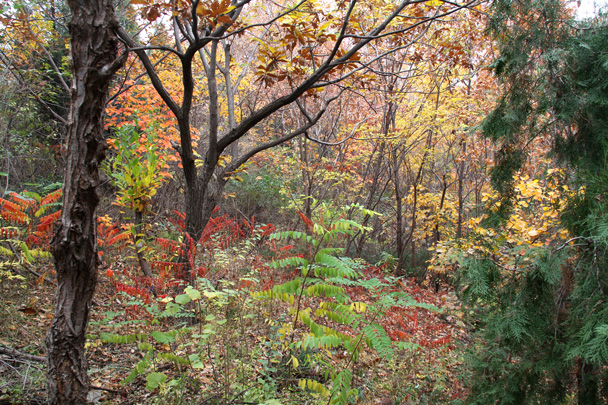 More of the beautiful colours. 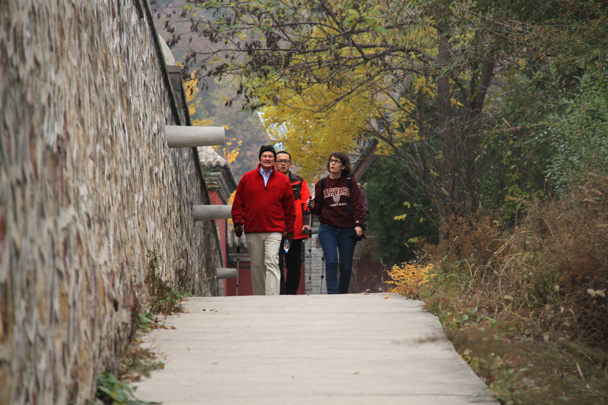 More hikers on the way up. 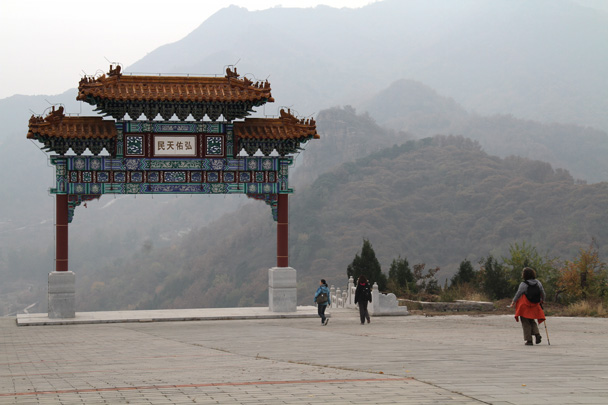 A large ornamental gate, with the inscription 'God Bless the People'. 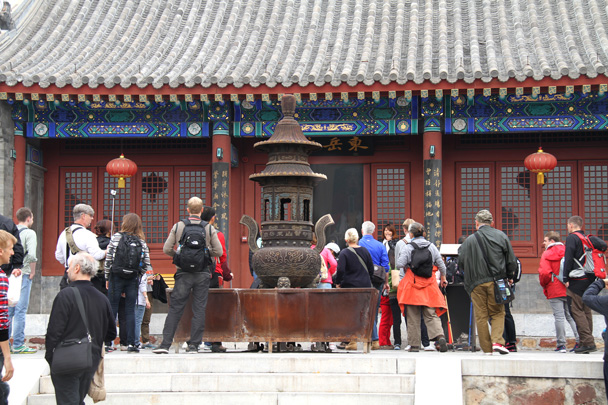 Hiking guide Ying is on the steps talking about Taoism. 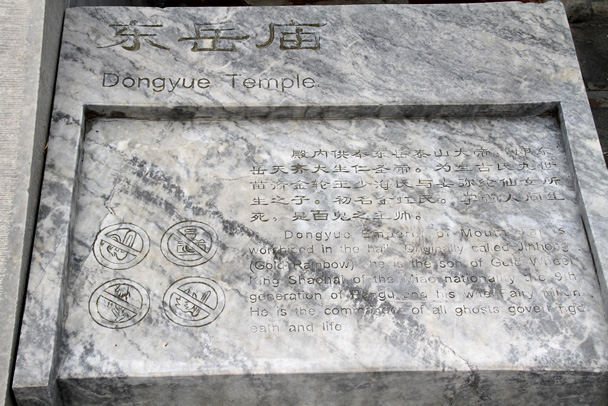 Some inscribed information about Dongyue Temple. 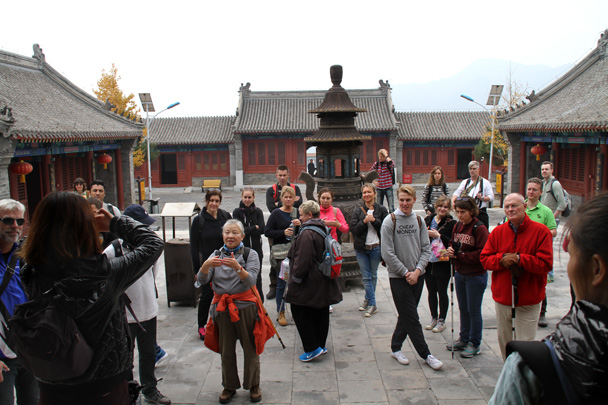 A demonstration of a Taoist greeting. 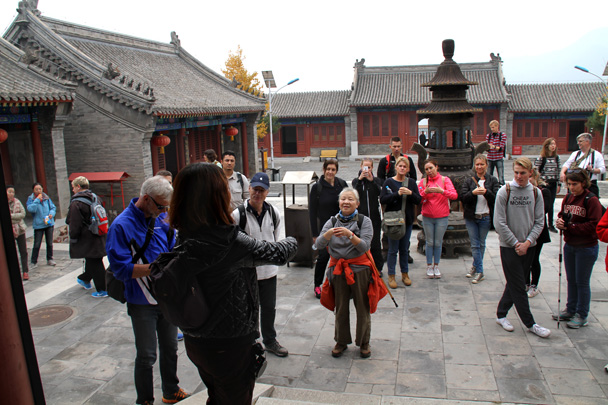 Not too difficult to learn! 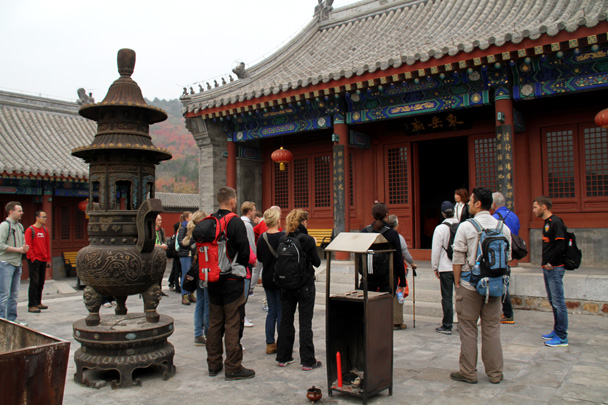 Ying is continuing her explanation about the temple and Taoism. 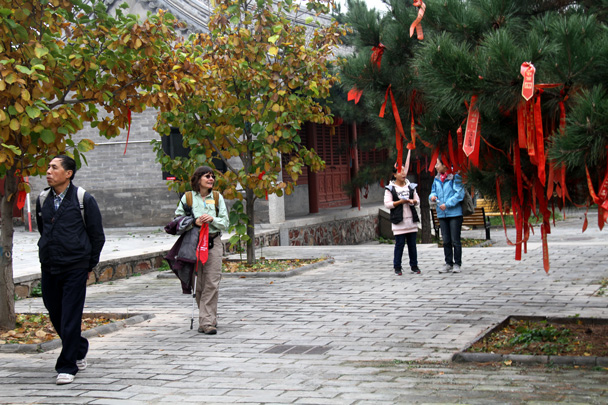 Betsy the naturalist, transfixed by a tree! 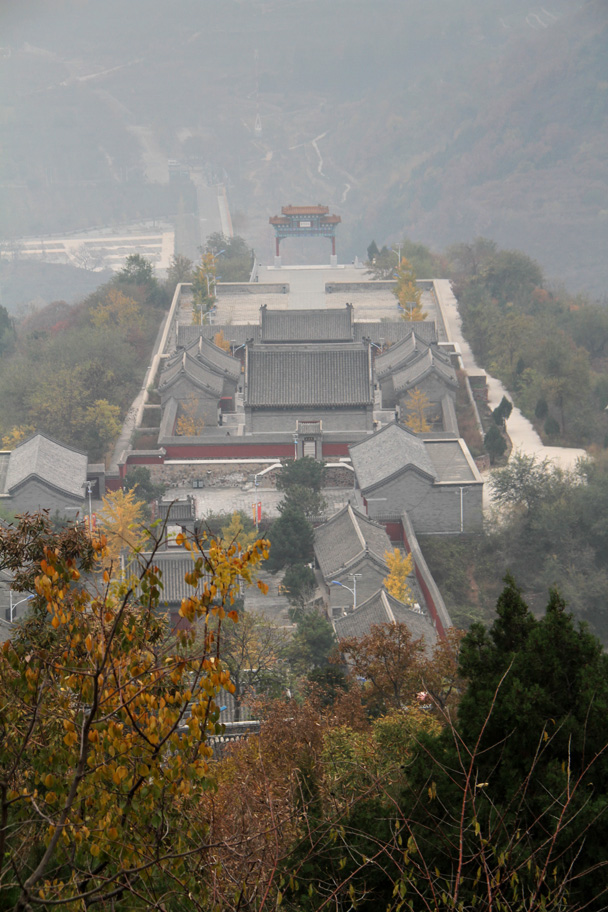 A view down the hill. We were on the way up! 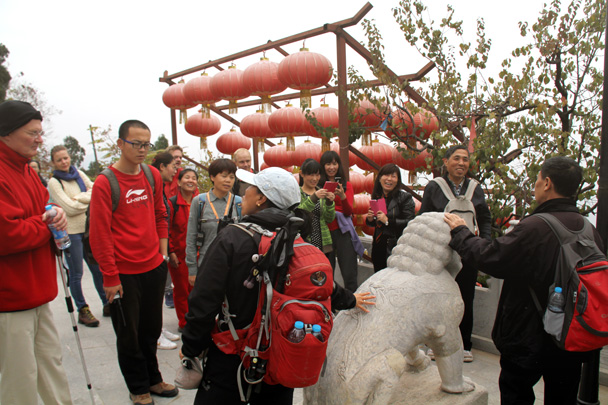 Huijie is talking about this stone lion and why it would have been placed here. 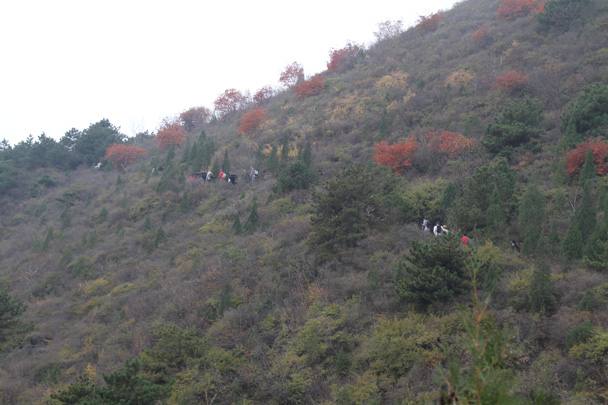 Starting off on the long trail through the hills. 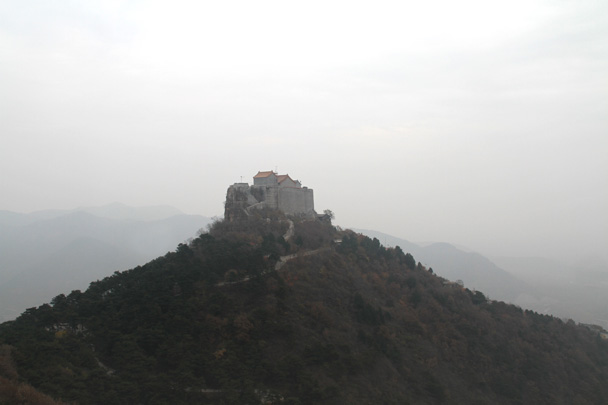 A view of the temples from the long trail. 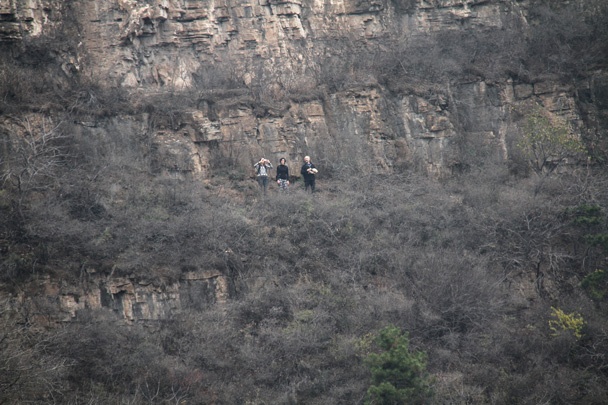 The long trail took us through mountainous scenery. 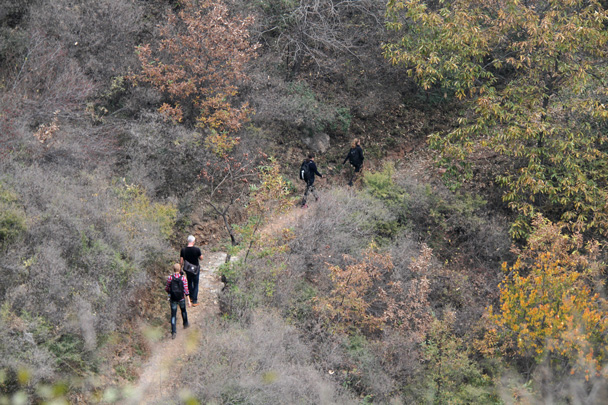 A scenic path through the hills. 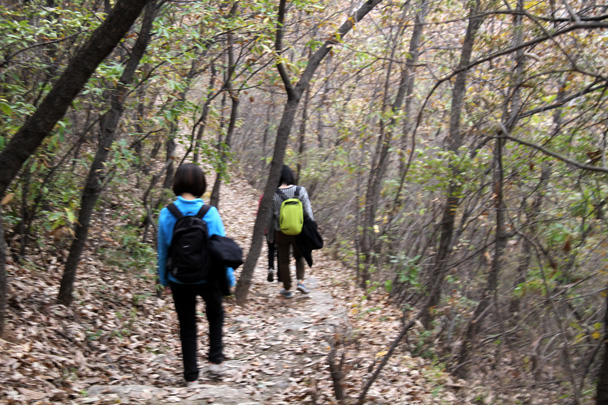 We passed through the forest. 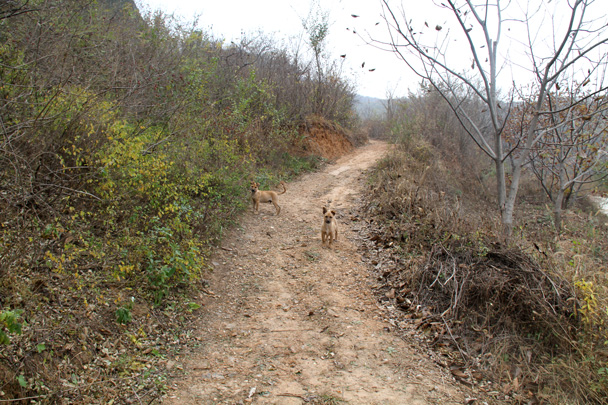 After coming out of the hills we followed dirt roads to finish the hike, passing these friendly dogs along the way. 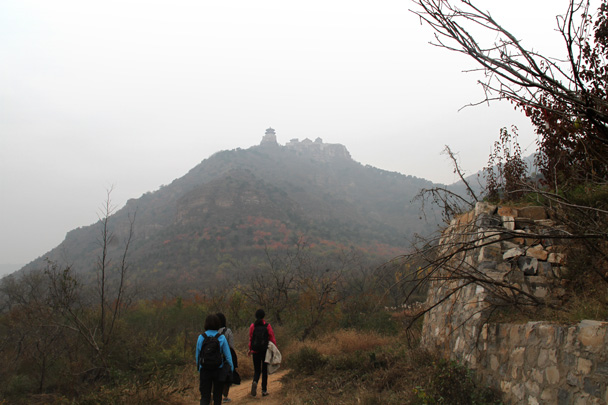 A view of the temples from below. 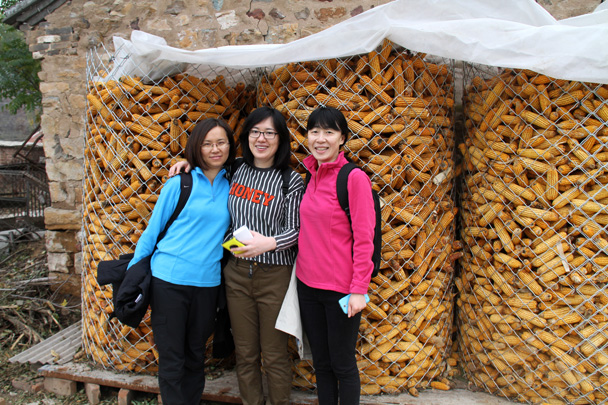 Photo time in front of the corn storage area. A lot of corn is grown to feed to pigs. 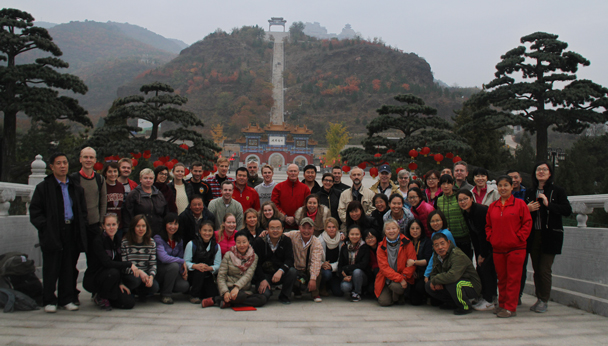 The Swedish Embassy team at Yajishan.