The Yudu Mountains hike is one of our new ones, and this was the first time we’d taken a group on it.

The first part of the hike was fairly tough: a big climb up the paved path to Yinmeng Temple.

Yinmeng Temple is sited at an elevation of about 1,000m – pretty high up, considering that we started the hike at about 500m! – and dates back to the Liao Dynasty. It was active as late as the Qing Dynasty, but fell into ruin during the 30s. The temple was repaired recently, and it’s popular with local pilgrims. We visited during Lantern Festival, and the path up to the top was busy.

Further past the temple a trail leads over a mountain pass and down to the Sujia River, passing an empty village.

We followed the river down towards Longqingxia, crossing on the ice and walking through groves of trees.

After a walk of about 4km down the river we made a big climb out of the river canyon to get back to the Beijing side of the mountains. It was a tough climb, but worth it for the broad views on the other side. A necessary climb as well—from that point there was no other way out of the canyon.

We finished with a walk out past Huangbai Temple. 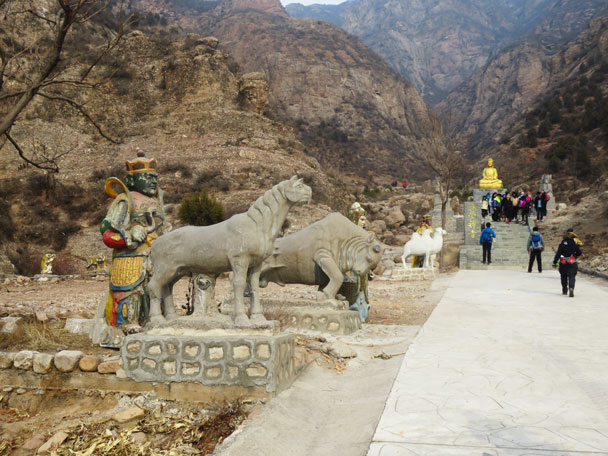 We started off on the paved path up to Yinmeng Temple. 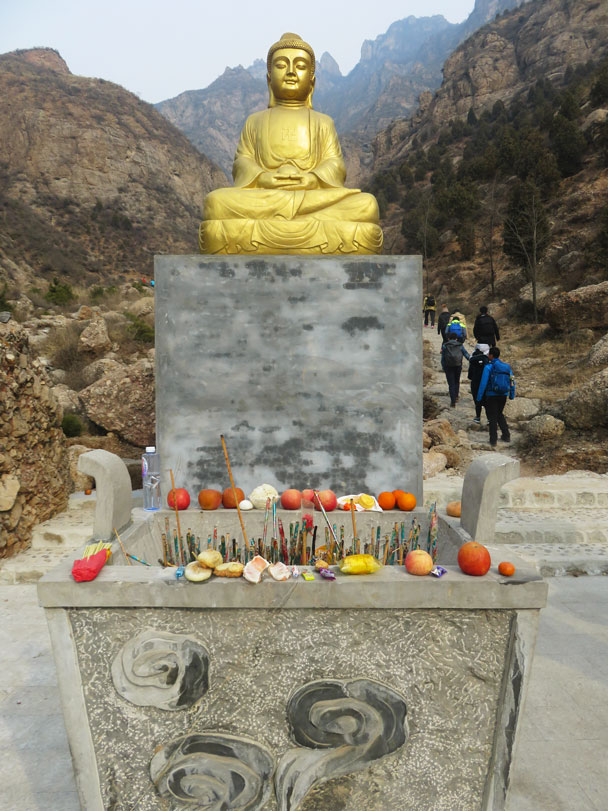 Some offerings at the bottom of the trail. 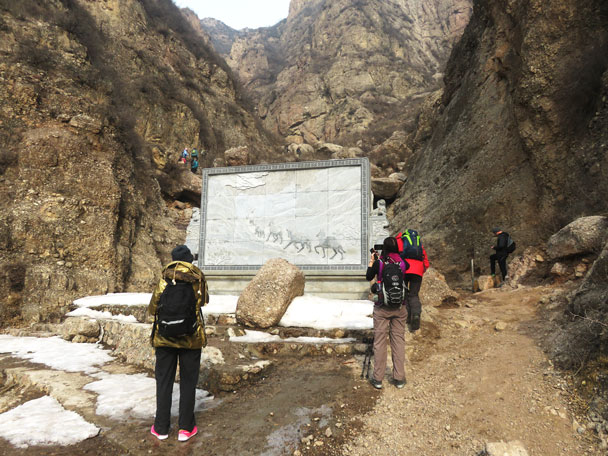 The artwork on the screen shows donkeys carrying loads into the mountains. 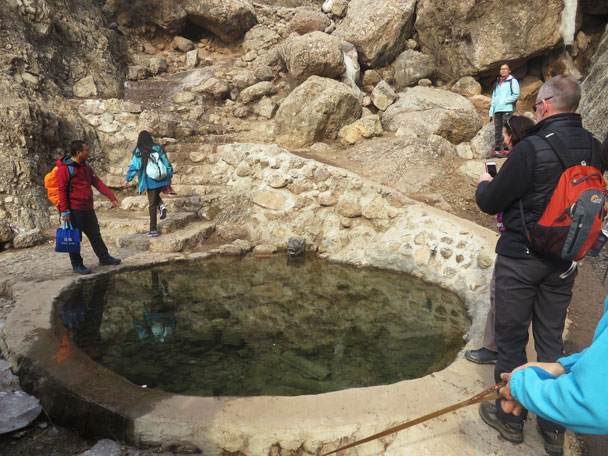 Behind the screen was a pool of clear water. 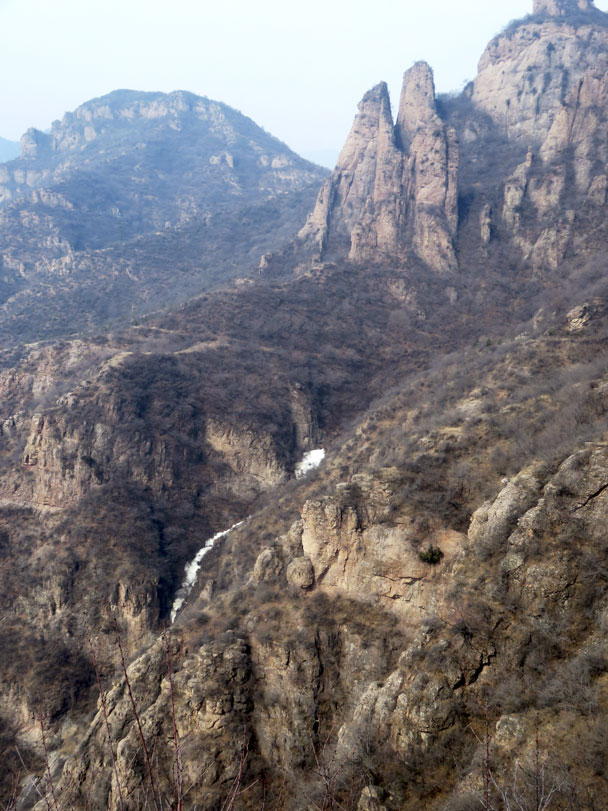 Further off in the mountains we saw the ice of a frozen spring. 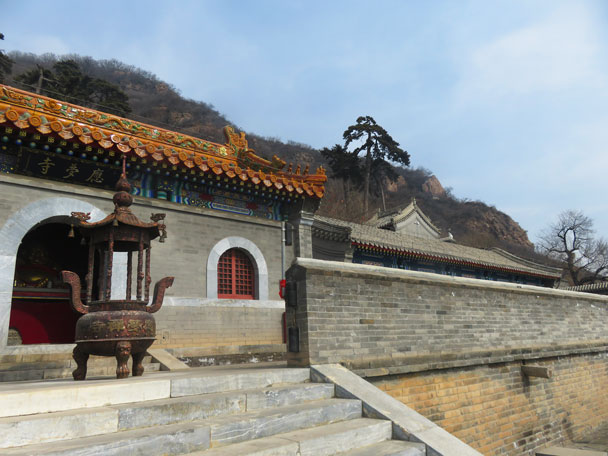 Inside one of the halls. 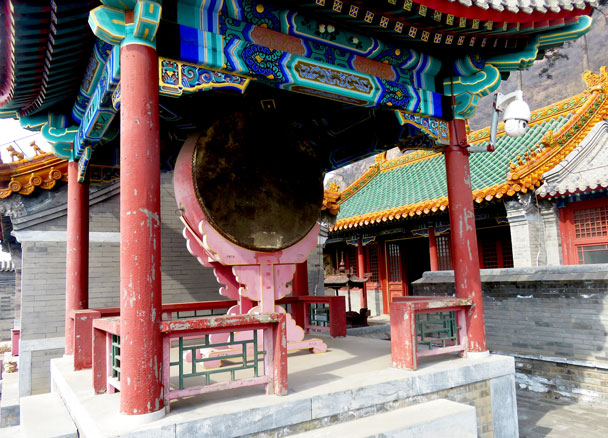 The Drum Tower in the temple. 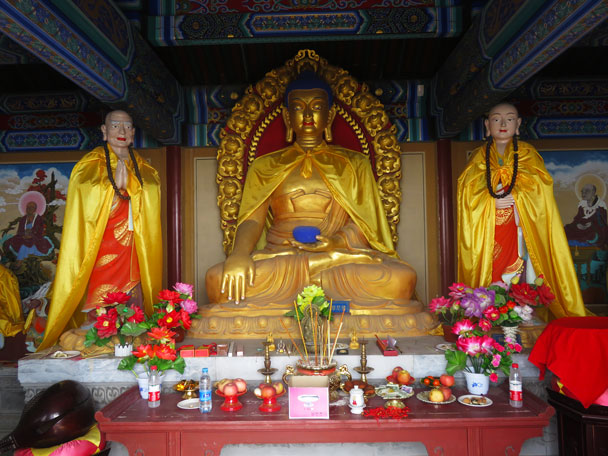 Inside another of the halls of the temple. 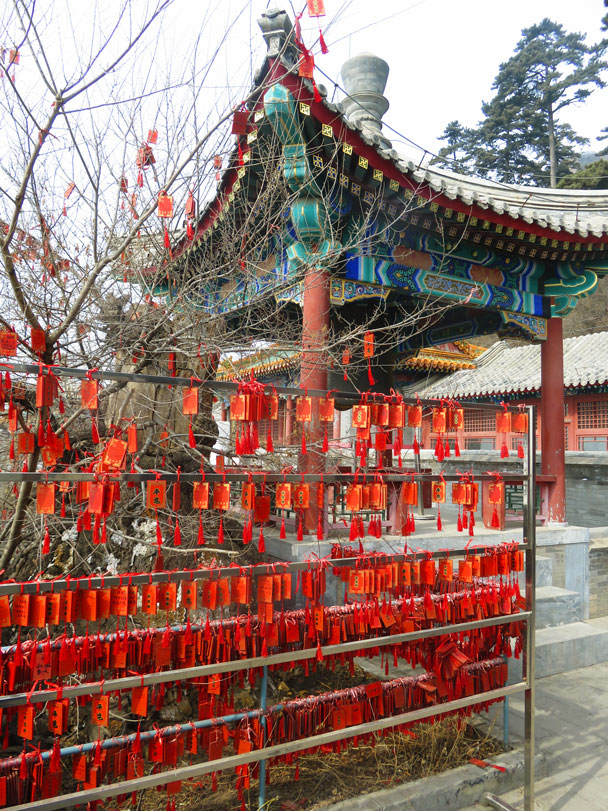 Red tags with the temple's Bell Tower behind. 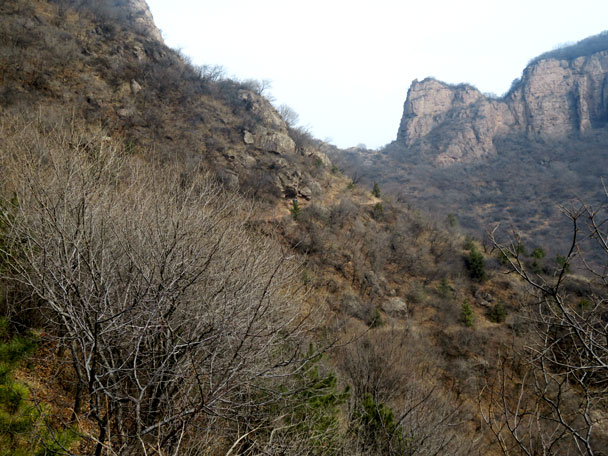 The hiking trail continued from the temple to cross the mountains at the dip. 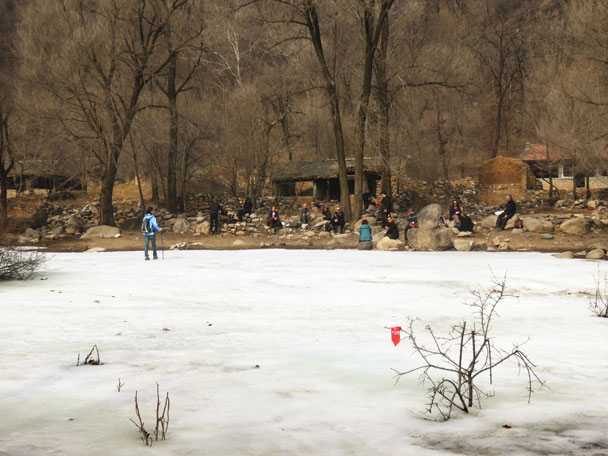 We hiked down the other side of the mountains to the river valley. The river was still frozen. 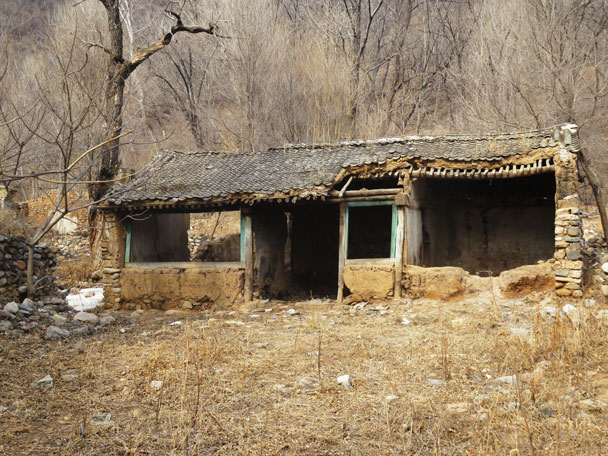 The last household in this village moved out in 2012. 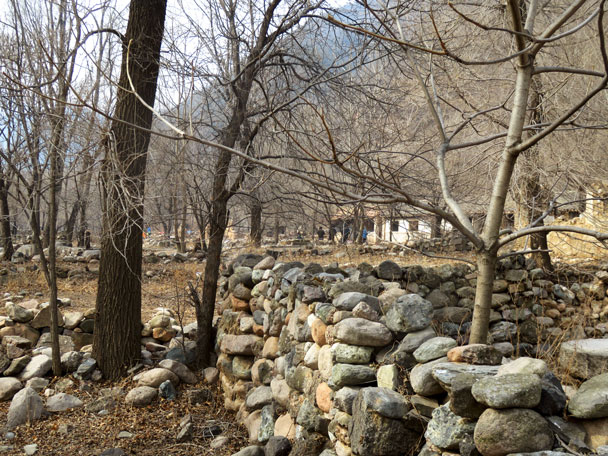 Old stone walls in the village. 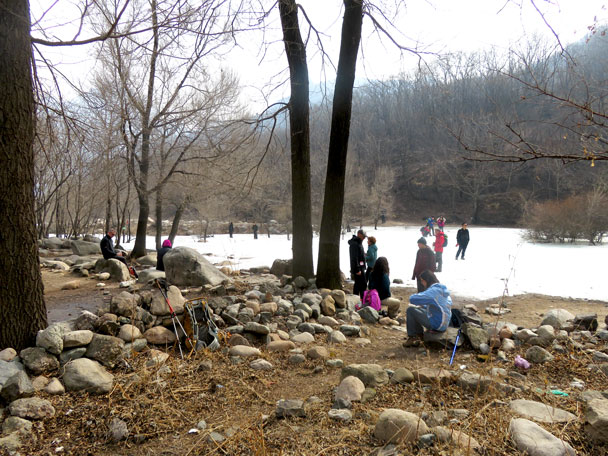 After we finished lunch we hiked on down the river. 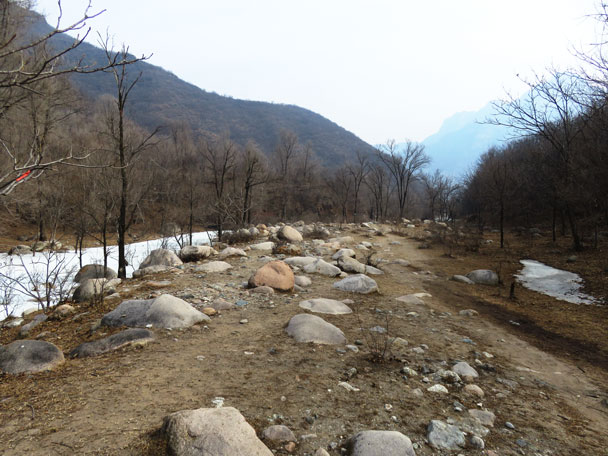 The main trail was beside the river, with a lot of crossings. 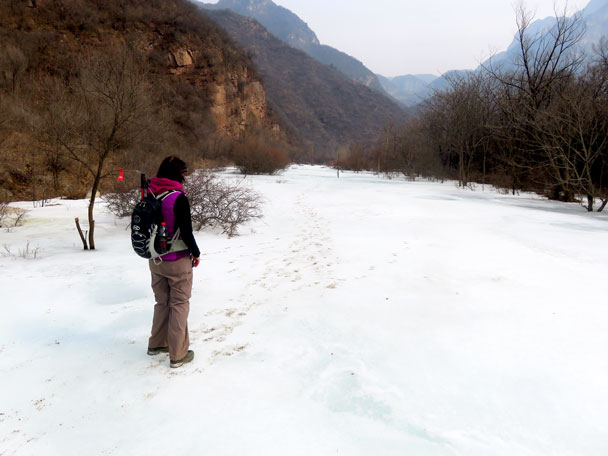 We hiked on the ice when possible. 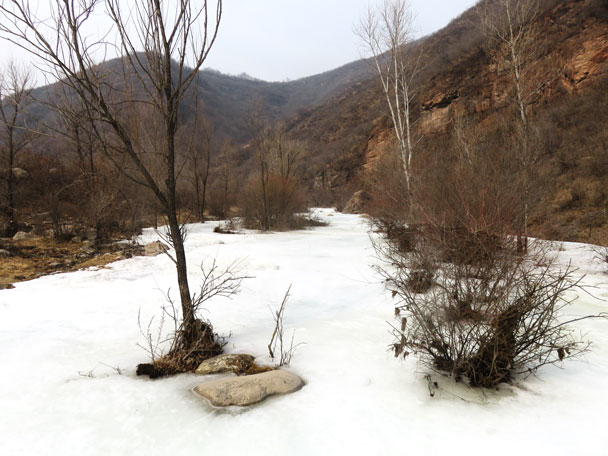 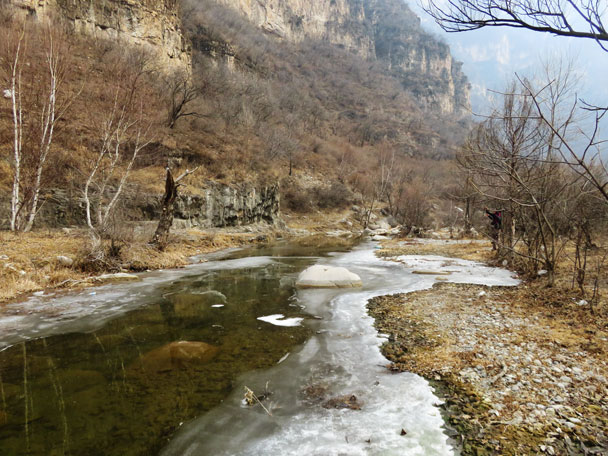 Here the ice had melted. 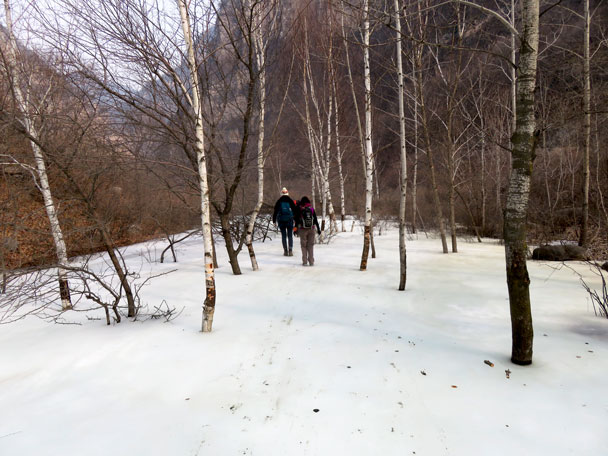 Trees frozen in the ice. 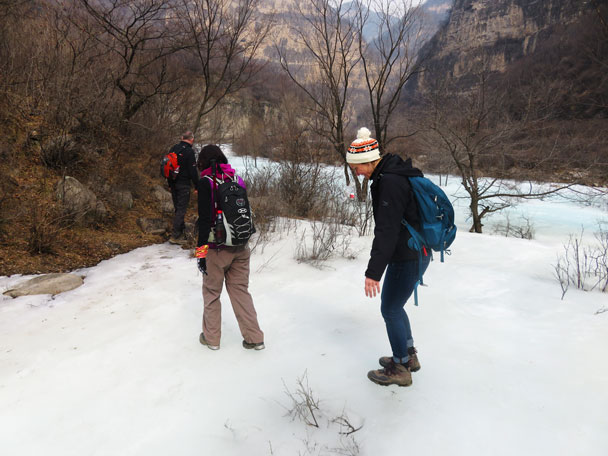 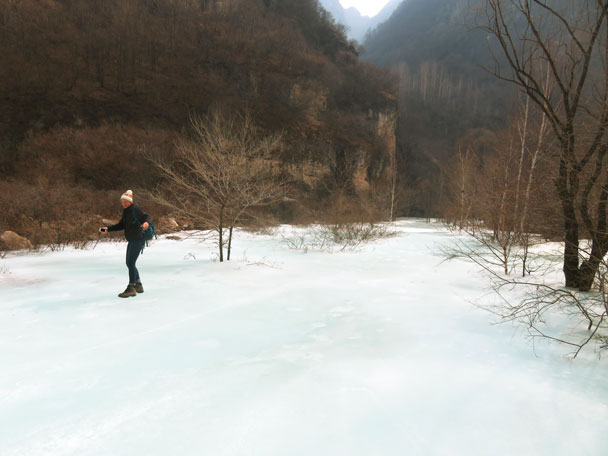 Hiking on the ice. 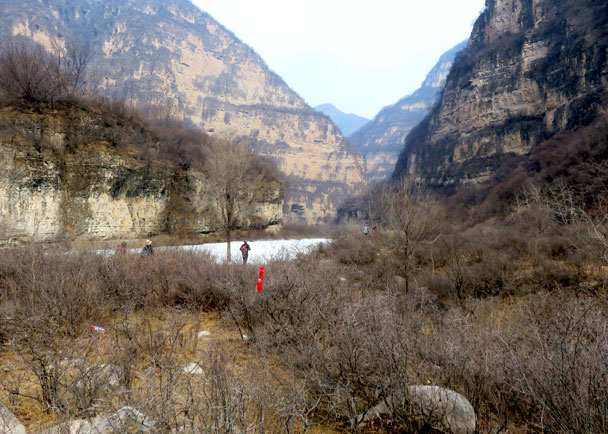 We continued down the river valley. The further we went, the higher the cliffs. 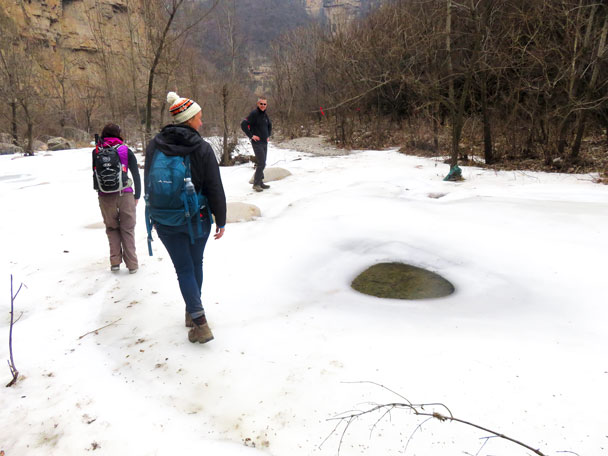 A little further around the corner we started the big climb out of the river valley to get back on the Beijing side of the mountains. 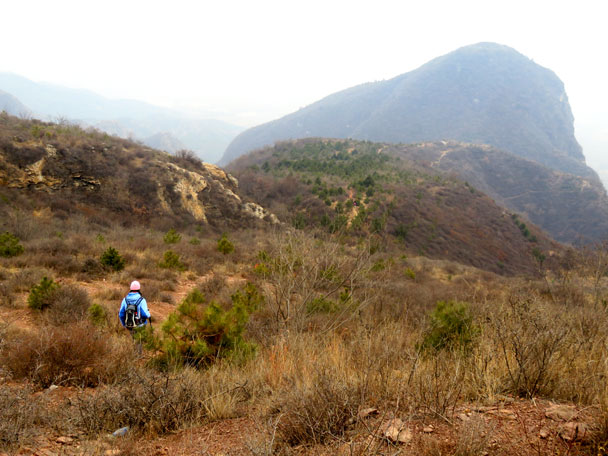 The path on the other side. 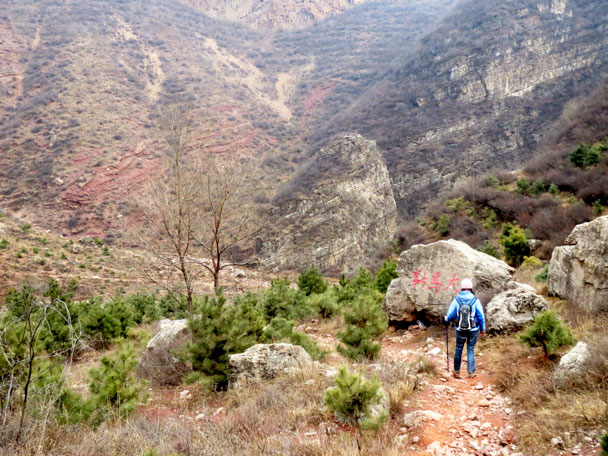 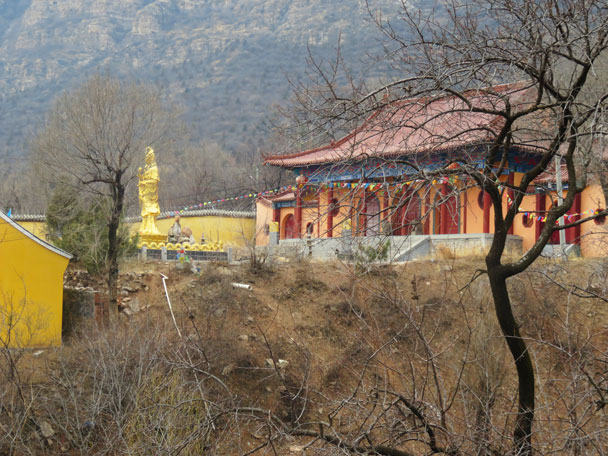 Huangbai Temple, near the end of the hike.