The location of the Ming Tombs was selected for its favorable feng shui conditions. According to this traditional Chinese system of aesthetics, a flat plain surrounded by mountains in the North, West, and East and with a river forming the southern boundary is an ideal location. This route took us from behind the mountains in to the northeast of the tombs towards the tombs themselves.

We drove to the trailhead at the head of a mountain village in Changping District and began hiking. The gently climbing path took us past the home of an old couple who have been living in the valley for decades. As it went deeper up the valley, it gradually steepened and the foliage grew denser. We went over a saddle on a ridge before descending down a valley on the opposite side.

The path down the second valley was slicker, and the vegetation was much thicker as well. Impressive vines snaked back and forth across the path, occasionally providing useful handholds as we made our way down the trail and through the brush. The trail eventually met up with a road went by an active quarry. We turned off the road before reaching the quarry, but not before catching a sight of massive dump trucks sending their loads careening down a hillside, stripping it of plant life and covering everything nearby in a grey layer of fine rock dust. Fortunately, we avoided the devastation and turned onto another forest trail.

The trail went by several wells and the foundations of abandoned houses that have long been overgrown. We hiked our second uphill section of the day and finally came over another saddle, from which we had a great view of the Ming dynasty’s imperial necropolis. Our trail made an abrupt turn and we followed it along the side of the mountain before turning down along a ridge and heading down a final valley. Our trail ended at a placid reservoir where a man was fishing by the dam. The road below the dam led us by two of the Ming Tombs, Yongling and Deling, and then to a village and the country guesthouse where we enjoyed a fine lunch before heading back into the city. 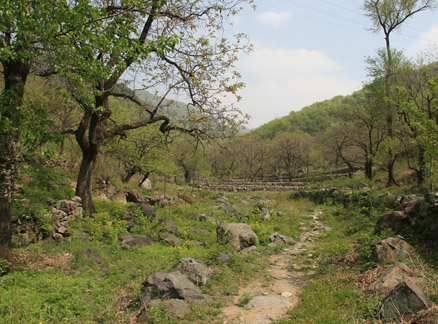 The path lead through the fields behind the mountain village. 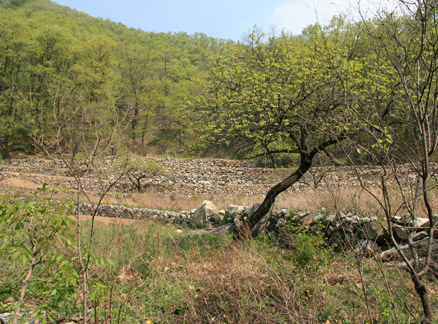 Terraces in the hills. 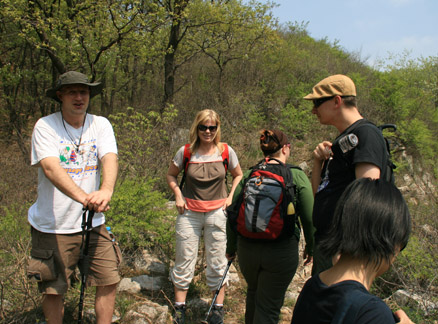 We stopped for a rest before climbing up to the first ridgeline. 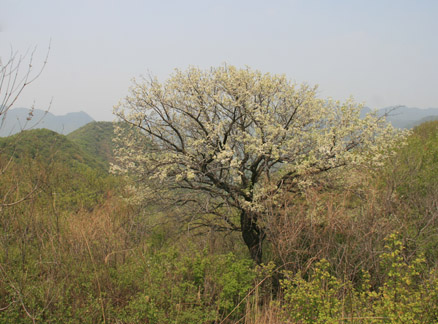 This flowering apricot tree marked start of the descent into the 'jungle' section of the hike. 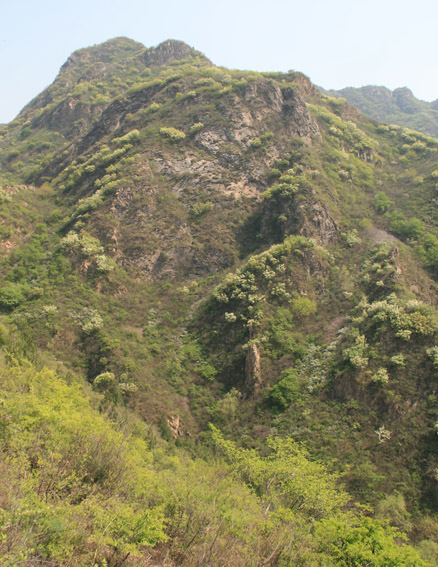 The hills and cliffs behind the reservoir. 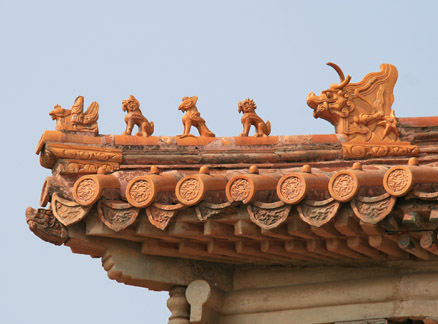 A zoomed shot of the ornaments on the roof of Deling Tomb.