The day began with a long drive up the Badaling Expressway into Yanqing County, and eventually into Hebei province. As we passed the Guanting Reservoir, we began to gain elevation and escape from the thick haze that was choking Beijing that morning. Our first glimpse of the Great Wall came when we passed by the spot along the highway where we’d eventually be picked up. We kept driving along the winding mountain highway until we reached the mouth of a dirt road, close to Zhenbiancheng, that led from the highway through cornfields up into a valley and towards the Great Wall. We got off the bus, sorted ourselves out and stocked up on water, and began walking up the farmers’ road.

As we walked west up the dirt road towards the Great Wall, we had fantastic view of Brushrest Mountain to the south. Its impressive, jagged peaks were lost to view once the valley narrowed and the dirt road became a path; we eventually left the cultivated fields behind us as we hiked up the valley to get onto the Great Wall. The path continued up hill and finally joined the Wall as it dipped into a saddle along the crest of a ridge that ran northwards from Brushrest Mountain. Getting onto the Wall, we could see farther west, deeper into Hebei province, as well as back east down the valley and across the fields we’d just come through. We rested at this junction until the tail end of the group caught up, and then we set off, heading north on the Wall as it undulated along the ridgeline. Faster hikers took off ahead while others opted to spend more time enjoying the scenery and taking photographs. Our group of 27 hikers and guides spread out over hundreds of meters along the route. Meeting up with each other at water breaks, we compared notes on the expansive vistas.

When we first scouted this hike, about two months ago, the countryside was still in the lingering, hoary grip of an unusually long, frigid winter. Snow drifts in the valleys on the way up to the Wall were quite deep, and some sections of valley paths were encased in ice. On our second visit a month ago to clear out the path between the highway and the Great Wall there was still some old snow on the ground on sections of trail that did not receive much direct sunlight, but green buds were beginning to appear on some of the branches. On this day's visit, spring had fully set in and as we rambled along we were able to appreciate how the countryside has turned from stark and barren shades of grey and brown to verdant brilliance punctuated by warm swaths of pink and white where trees are in bloom. The rippingly cold winds that assaulted us on our scouting trip in March had given way to gentle breezes that were quite refreshing as the temperatures that day were warm, though not uncomfortably so. The weather couldn’t have been better for the day’s adventure. 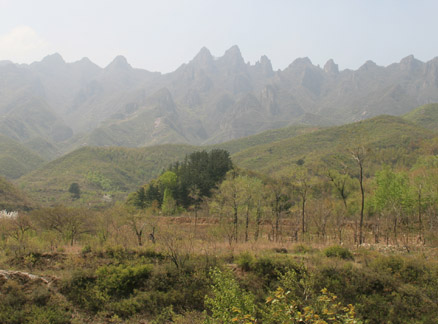 The peaks of Brush-rest Mountain. 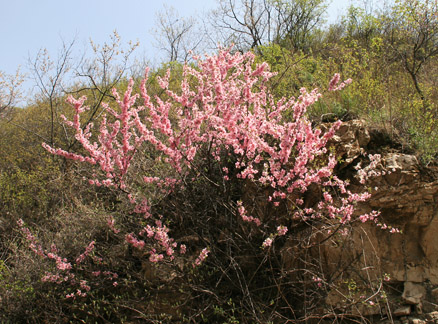 Blossoms alongside the valley trail. 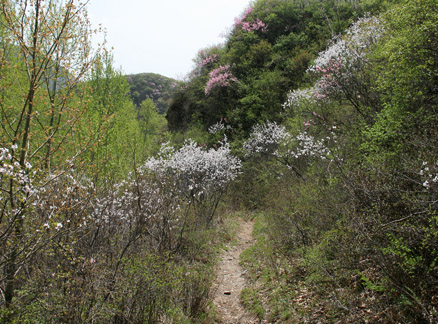 The trail up the valley was mostly flat at the beginning.

We had begun subtly ascending as soon as we started the hike, but once we mounted the Great Wall the gradient dramatically steepened. There were several peaks along the ridge, the highest one we reached being towards the end of the section we walked. From these vantage points we could look east, towards some of our other hikes like the Yanqing Great Wall hike and the High Tower hike. After each peak we would descend for a short while, only to have the route climb again very abruptly at the end of the descent. Some sections of the Wall were too steep and dilapidated to traverse; there was a risk of damaging the wall or injuring ourselves. At these points, we detoured along paths cut through the bush that ran parallel to the Great Wall. Our route seemed to consist entirely of ascents and descents until we came near to Big Camp Plate, one of our other hikes, were the Great Wall was relatively flat and even, but not for very long.

Finally, in the late afternoon, we left the Great Wall and struck out across the hills towards another dirt road that would take us back to rejoin our bus, which waited for us on the highway. A jeep was stationed at the top of the dirt road in case anyone was too exhausted to walk down the last stretch of road to the highway, but everyone walked into the finishing point, where we had well-deserved cold beer and snacks waiting for us. We’d walked about 18.5 kilometers in seven and a half hours, and because of the continuous uphill and downhill hiking, the total amount of elevation we gained was over 1300 meters, even though the difference between our highest and lowest elevations was only about 600 or so. It was a good, challenging day, and this route is now one of our new favourites. 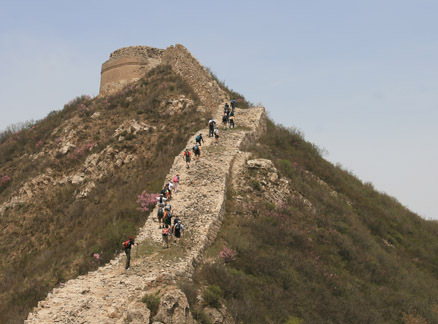 One of the first towers we climbed up to after reaching the wall. 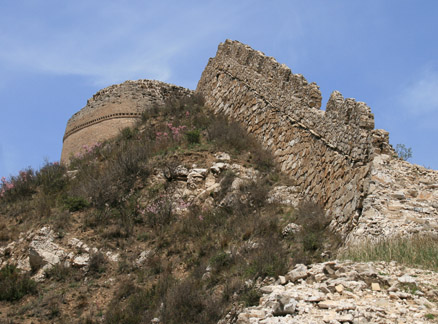 Fragment of Great Wall and Round Tower. 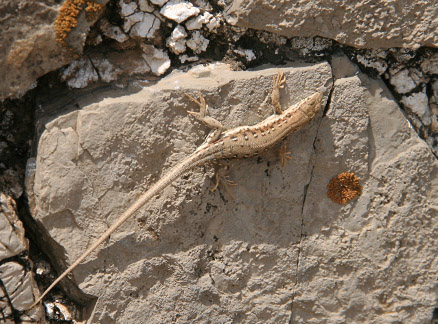 A lizard hanging on to the wall. 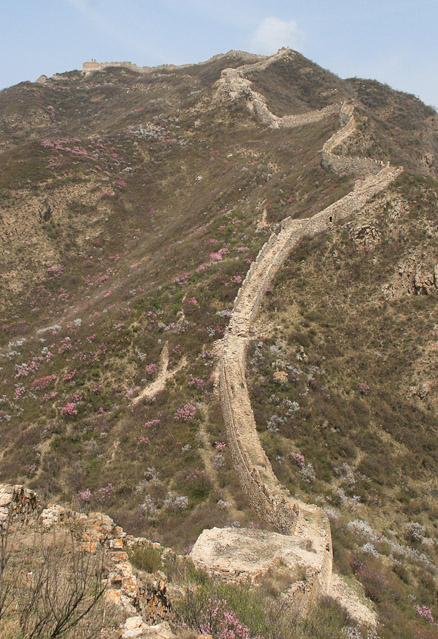 One of the steep climbs we did along the way. 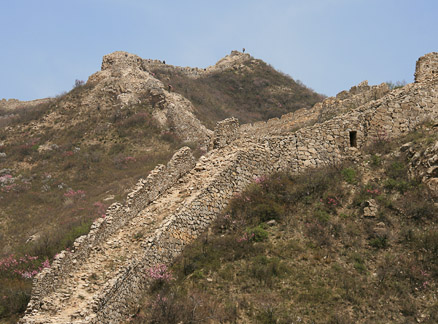 A section of wall, with an interesting looking opening in the side. 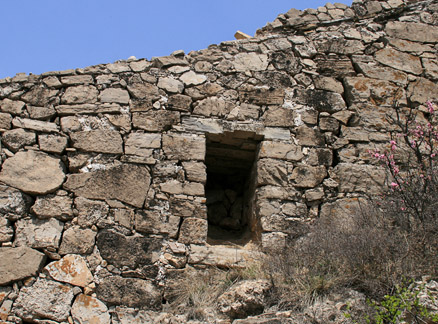 Nothing much to see inside. 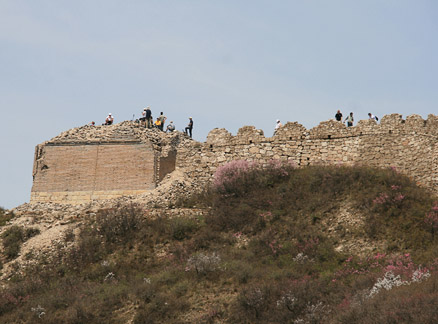 We stopped here for a lunch break. 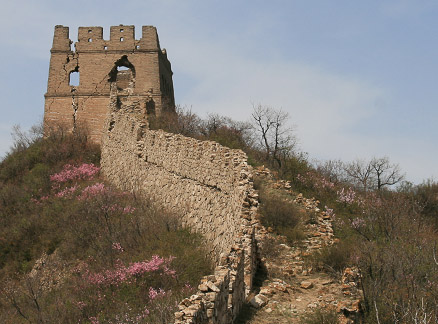 The other side of this tower had tumbled down. 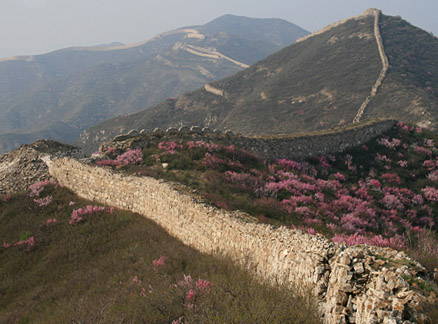 Pink blossoms by the wall, with an interesting doubled wall in the background . 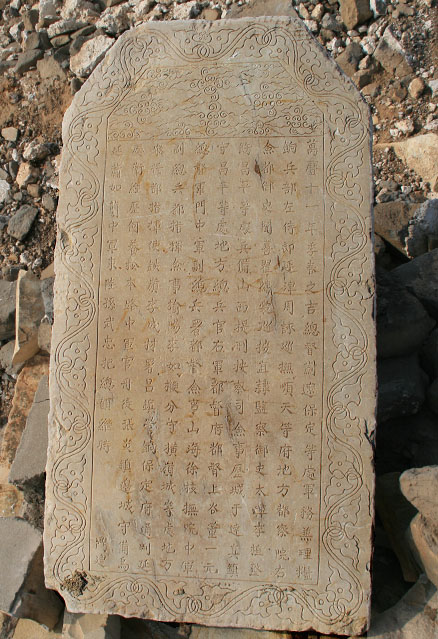 This tablet had lasted well, and is hopefully too heavy for anyone to carry away. 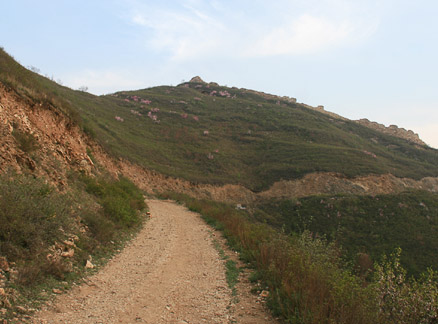 After finishing with the wall walking, we got on to some of the roads and paths around Big Camp Plate. 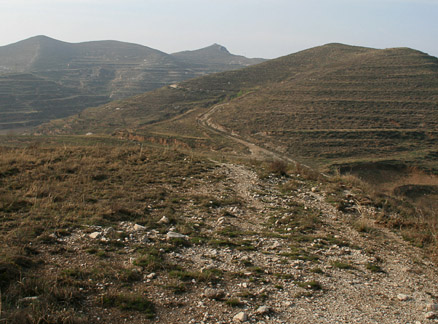 We walked across the hillside, aiming for the terraced hills of Big Camp Plate and the access road that would lead us to the bus. 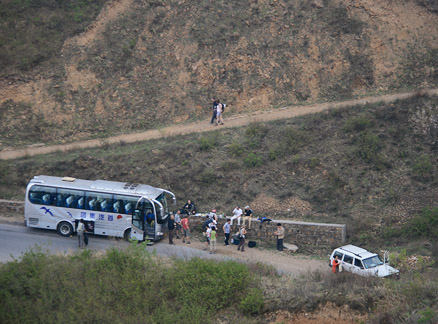 Snacks and beer on the roadside, before heading back to Beijing.