On this hike we'll follow an ancient pilgrim's trail over a high ridge, and finish the day with a visit to the one of the oldest temples in Beijing—cost of tickets included in the price of the hike.

We begin the hike at a village near the Miaofengshan Temple in the western district of Mentougou District, and hike up a hill trail to get on to a nice easy-going path that leads through the mountains. The initial climb will take approximately 40 minutes, and for the rest of the hike the path is either flat, downhill, or on a gentle uphill gradient.

The trail through the mountains first leads along a broad hillside and past a farmer’s house, on the way to a pine forest that is a good place to hunt for mushrooms and medicinal herbs. We sometimes see donkeys carrying loaded baskets when we walk through here. On the other side of the pine forest is a broad plateau where we’ll stop for our lunch break. Looking east from the plateau we can see the network of roads and small settlements that eventually lead toward urban Beijing.

After lunch, and a rest, we’ll follow a pilgrims' trail down to Dajue Temple. The trail is paved with rocks, and along the way we will pass the ruins of old teahouses that served refreshments to those travelling to the temples in the area. It's quite a peaceful area, and on previous visits we have seen people meditating, and playing flutes.

Dajue Temple was built in 1068 A.D., during the Liao Dynasty (916-1125 A.D.). The construction was reputedly overseen by a reformed eunuch – not reformed in the sense that he was ‘restored,’ moreso that he grew tired of his role in the intrigues of the court of Empress Dowager Cixi, found faith, and became a patron of local Buddhists. 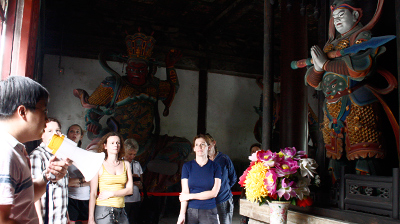 A local expert explains the signficance of the figures in this hall of Dajue Temple.

The dominant religion of the Liao was Buddhism. Many also worshipped the sun. Correspondingly, this is a Buddhist temple, and was built facing east, towards the rising sun.

The temple, when first constructed, was known as Qingshui, or Clear Water Temple, and the sparkling stream for which it was named still runs through the temple grounds. It has been known as Dajue Temple since reconstruction during the Ming Dynasty.

Built on a hillside, the temple complex is expansive, and contains much to explore: five major buildings and halls that contain shrines, scripts, wood-carvings, and buddhas and other figures, as well as ponds, stupas, stone bridges, and pavilions.

Huge and ancient trees are found within the grounds of the temple—old pines and cypresses inhabited by squirrels, 300-year old magnolia trees, and a huge and gnarled ginkgo tree that is nearly 1,000 years old.

Photos and trip reports: Walk Down The Incense Trail to Dajue Temple