This hike started in a small hamlet known as “Longevity Village”, which we quickly passed through before starting our first uphill climb of the day. We wound our way up through the forest to emerge at the top of a hill almost directly across from a striking, rocky summit which provides the backdrop for the Silver Pagodas, a set of ancient Buddhist pagodas that date back about 300 years.

Heading down the other side of the hill, we made our way through a brushy section, emerging near the top of the mining area. On the way down past the mines some hikers collected interesting looking rocks. A beekeeper appraised them for us - he said the pink-coloured stones were worth 6–7,000 RMB a ton. We decided to collect wild raspberries instead of rocks, for a more immediate payoff.

At a shady place at the bottom of the mining valley we stopped for our lunch break before starting the second uphill section of the day. The top of this hill opened out onto views of lush valleys and rolling hills which were very different from the ones we had seen at the first summit.

From there, we made a descent into another valley and hiked in its shade for a while, passing abandoned villages before starting the third and final uphill of the day. The final summit we reached was just above the hills closest to the Ming Dynasty emperors’ tombs.

We hiked past two of the closed tombs en route to the village at the end of the hike, where we enjoyed cool beverages, snacks and refreshments in the town square before heading back to the city. 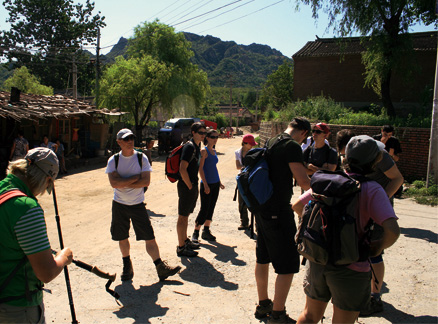 Our group at Longevity Village, ready for the start of the hike.

Although the trail was fairly overgrown in parts, open sections such as these allowed us to get good views of the highest peaks in the area.

From the top of the first summit, we were able to see the high, sharp peaks overlooking the Silver Pagodas.

This is one of the many species of beautiful wildflowers that we saw in bloom during the hike.

During the descent into the valley, the group followed a quarry road for a short distance before re-entering the forest.

A welcome lunch break in a shady valley and chance to get refreshed before starting the second uphill climb of the day.

Mushrooms are commonly seen in the forest in the summer and this is an example of one of several species that we saw during the hike.

This is part of an abandoned building that the group passed along the way. A number of small villages in the valleys have turned into ghost towns as their inhabitants have moved away due to lack of resources, opportunities, access to roads, and encroaching mines and quarries.

A round mushroom grows wild in the grass. This one was around the size of an ostrich egg!

Another variety of seasonal mushroom that is found in mid-summer. They tend to be in season only for a few weeks at a time.

A view of the verdant hills and valleys surrounding the area as seen from the second summit of the day.

An insect’s cocoon - perhaps once home to a caterpillar.