We had beautiful weather for our hike from Zhuangdaokou to the Walled Village. We started the hike a near the village orchards and after crossing a bridge to enter the town, took a break by the 300-year-old 'Dragon and Phoenix' pine trees. From there, we followed a path up the valley behind the village to reach an arch in the Great Wall.

There, some of the members of the group took a break as the others hiked high up on the steep wall to get views of the surrounding peaks and valleys. The view back from the highest point overlooks a reservoir in the next valley and another high section of high wall that continues along the ridgeline in the distance.

After finishing our look at the Great Wall we continued the hike through the chestnut orchards, along a route that for a while paralleled the Great Wall on the high ridgeline above.

Then the path gradually descended to the Walled Village. After another short break to walk on top of the walls and explore the narrow lanes within, we hiked out to the main road and ended the hike with a delicious late lunch at a nearby restaurant. 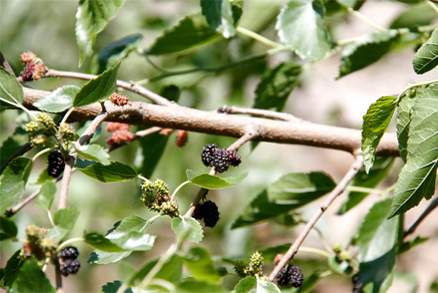 Mulberries were in season.

Some members of the group were keen to get some more strenuous exercise, and headed up steep stairs to get to an unrenovated section of Great Wall.

Views of the unrenovated section of the wall from the other side of the valley.

Heading the other way, the wall has been restored. It's a steep climb, but the views are worth it.

Near the reservoir in the background is the restaurant where we had lunch after the hike. After lunch we climbed the wall on the other side.

Hikers near the top of the first section of wall we visited.

On the way to the Walled Village we walked a nice shady trail through the chestnut trees.

Our friendly puppy got a little tired!

As we walked through the chestnut trees we had glimpses of the wall on a ridge that paralleled our path.

It was nice to be able to walk in the shade on such a hot day.

The group enjoys a well deserved meal after the hike.