Braving a thunderstorm, we headed to the western suburbs of Beijing to hike in the hills around Tanzhe Temple, one of the oldest in Beijing. The bad weather worked out well for us - the thunderstorm passed without incident, and the air ended up nice and clear.

The first part of our day was a hike around Yangpoyuan, also known as Ingot Village. Ingot Village had been sparsely populated for quite some time, and on this visit we found it completely empty. Our local guide told us why: the local village officials had been wanting the residents to move out for quite some time, and had finally cut off the electricity. It seemed as though people had moved out in a hurry, with some household items left behind.

We hiked back to the temple for a tour, taking a good look around and lighting incense to accompany prayers for family and future. 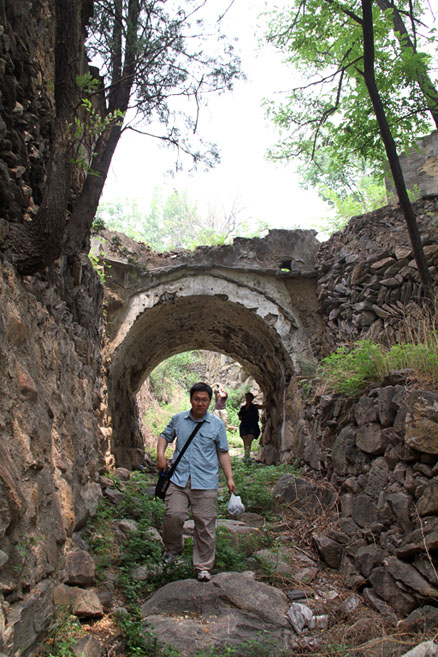 Part of the trail took the group through an ancient tunnel past stone walls.

We had time to enjoy a visit the grounds of this Buddhist temple.

Some members of the group took advantage of their time there to participate in traditional temple activities, like burning incense

A water spout in the shape of a mythical animal. Most traditional water spouts are in the form of a dragon’s head, as it was believed in ancient times that dragons were responsible for the global water cycle and lived in bodies of water and in the clouds.

The group takes a break to relax at the temple in front of a beautiful backdrop of lush, vegetated hills.