The Yanqing Great Wall is one of our favourite remote stretches of wall, and the hike we do out there has a good amount of up and down along the way.

The wall out there was built during the early Ming Dynasty, perhaps on top of even older wall, and much of it is not in good shape. For most of the walk we followed a trail beside the wall.

We were a bit worried about the weather – much of the hike is quite high up – especially as it was raining in Beijing that morning. But there wasn’t rain (or snow!) out there, and, while it was around 3°C most of the day, it didn’t feel too cold as long as we were walking!

Below you’ll see a few photos from the hike – Great Wall, brown hills and mountains in the distance, overcast skies, and the nice warm restaurant where we finished up! 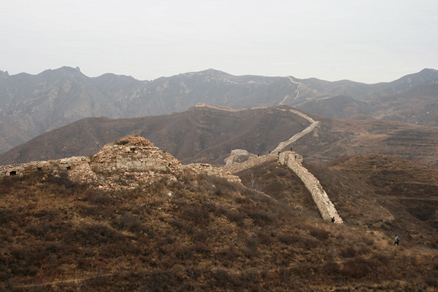 Near the beginning of the hike, we could see the wall stretching off towards the high ridges in the distance.

Much of the wall in this area is built from large stones, with a bit of mortar holding them together still.

The wall follows the main ridgeline, turning and twisting along the highest parts of the hills out here.

Off in the distance, the distinctive peaks of Bijiashan (Brush-rest Mountain) can be seen through the mist.

Compared to much of the Great Wall built later in the Ming Dynasty, the wall here is quite narrow.

Near the end of the hike we left the wall to follow a path through the hills.

When we see this reservoir, we know we’re almost done with the walking.

Before heading back to the city we warmed up with a light meal—accompanied by a few beers, of course!